Climate Collapse and the Responsibility of the Military

“A nation that continues year after year to spend more money on military defense than on programs of social uplift is approaching spiritual death.” –Martin Luther King 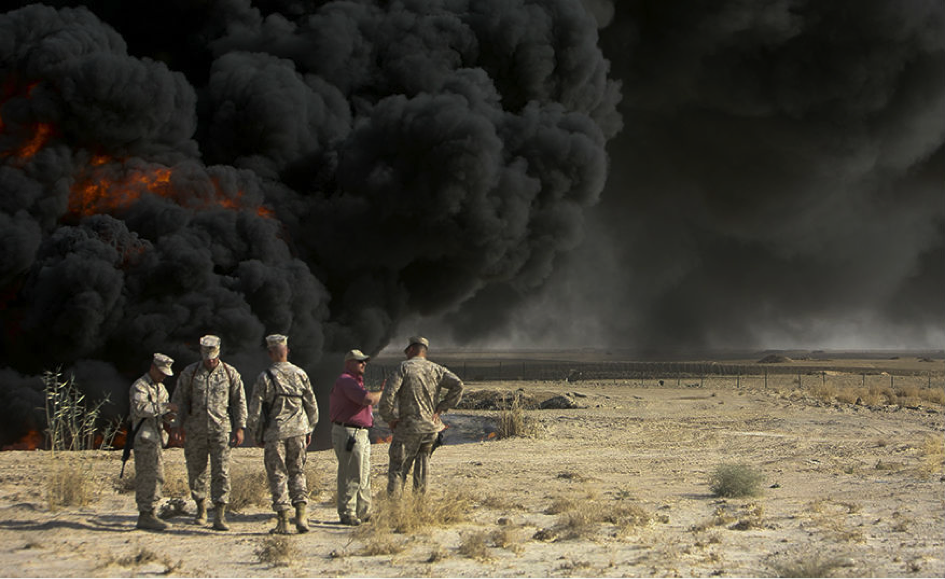 While many of us reduce our carbon footprint through simpler living, the military is immune to climate change concerns. The military does not report climate change emissions to any national or international body, thanks to US arm-twisting during the 1997 negotiations of the first international accord to limit global warming emissions, the Kyoto Protocol on Climate Change.

Frustrating to see is that almost nothing is mentioned about the enormous polluting contribution by militarism  — neither during the many climate change debates and demonstrations, nor in the media. During environmental conferences there is silence about the military’s polluting effects.

U.S. military accounts for 25% of the total U.S. consumption of oil, which is itself 25% of the total world consumption.  The US Sixth Fleet,  is one of  the most polluting entities in the Mediterranian Sea. The US Air Force (USAF) is the single largest consumer of jet fuel in the world.

In 1945 the US military built an air base at Dhahran, Saudi Arabia, the start of securing permanent American access to newly discovered Middle East oil. President Roosevelt had negotiated a quid pro quo with the Saudi family: military protection in exchange for cheap oil for US markets and military. Eisenhower possessed great prescience about the post-World War II rise of a permanent war-based industry dictating national policy and the need for citizen vigilance and engagement to curb the “military-industrial” complex. Yet, he made a fateful decision on energy policy, which set the US and the world on a course from which we must find our way back.

The rapid rise in greenhouse gas emissions that creates the current climate crisis began in around 1950; in the period immediately following the Second World War. This is not a coincidence. Oil had been important in the First World War, but controlling access to oil supplies was crucial in the Second. The Allies would not have won had they not been able to cut off German access to oil and to maintain it for themselves. The lesson for the U.S. in particular after the war was that continuing access to and monopolisation of the world’s oil was essential if it was to be the world’s superpower. This made oil a central military priority, and also cemented the dominant position of the petroleum/automotive sector in the US. These were preconditions for a system dependent on greenhouse gas emitting technologies for military and domestic production; the source of the climate change we are facing now.

By the late 1970s, the Soviet invasion of Afghanistan and the Iranian Revolution threatened U.S. access to oil in the Middle East, leading to President Carter’s 1980 State of the Union warmongering doctrine. The Carter Doctrine holds that any threat to US access to Middle East oil would be resisted “by any means necessary, including military force.” Carter put teeth into his doctrine by creating the Rapid Deployment Joint Task Force, whose purpose was combat operations in the Persian Gulf area when necessary. Ronald Reagan ramped up the militarization of oil with the formation of the US Central Command (CENTCOM), whose raison d’etre was to ensure access to oil, diminish Soviet Union influence in the region and control political regimes in the region for the national security interests. With growing reliance on oil from Africa and the Caspian Sea region, the US has since augmented its military capabilities in those regions.

The 1992 Kyoto Protocol explicitly excluded greenhouse gas emissions from military action from its emissions targets. The U.S. demanded and won exemption from emission limits on “bunker” fuels (dense, heavy fuel oil for naval vessels) and all greenhouse gas emissions from military operations worldwide, including wars. George W. Bush pulled the U. S. out of the Kyoto Protocol as one of the first acts of his presidency, alleging it would straitjacket the US economy with too costly greenhouse emissions controls. Next, the White House began a neo-Luddite campaign against the science of climate change.

The automatic exclusion of greenhouse gas emissions from military action was removed in the 2015 Paris Agreement on Climate. Trumps administration refused to sign the agreement and it is still not mandatory for signatory countries to track and reduce their military carbon emissions.

When the U.S. Defense Science Board reported in 2001 that the military would need either to develop more oil-efficient weapons or better support systems to be able to keep themselves supplied, “the generals seem to have chosen a third option: capturing access to more oil”. This indicates the fundamental truth about the military and climate change: that the modern way of war emerged from and is only possible with profligate use of fossil fuel.

Oil security comprises both military protection against sabotage to pipelines and tankers and also wars in oil-rich regions to assure long-term access. Nearly 1000 US military bases trace an arc from the Andes to North Africa across the Middle East to Indonesia, the Philippines and North Korea, sweeping over all major oil resources – all related, in part, to projecting force for the sake of energy security. Further, the “upstream emissions” of greenhouse gases from the manufacture of military equipment, testing, infrastructure, vehicles and munitions used in oil supply protection and oil-driven wars should also be included in the overall environmental impact of using gasoline.

At the outset of the Iraq war in March 2003, the Army estimated it would need more than 40 million gallons of gasoline for three weeks of combat, exceeding the total quantity used by all Allied forces in the four years of World War 1. Among the Army’s armamentarium were 2000 staunch M-1 Abrams tanks fired up for the war and burning 250 gallons of fuel per hour. Iraq has the third-largest reserves of oil. No doubt that The Iraq war was a war over oil.

The air war in Libya has given the new U.S. Africa Command (AFRICOM) – itself another extension of the Carter Doctrine – some spotlight and muscle. A few commentators have concluded that the NATO war in Libya is a justifiable humanitarian military intervention. The air war in Lybia violated the UN Security Council Resolution 1973, the US Constitution and the War Powers Act; and it sets a precedent. The air war in Libya is another setback to non-militarized diplomacy; it marginalized the African Union and it sets a course for more military intervention in Africa when US interests are at stake.

If we compare figures:

War isn’t just a waste of resources that could be used to tackle climate change, but is itself a significant cause of environmental harm. The armed forces have considerable carbon footprints.

The US military admits to getting through 395,000 barrels (1 US barrel = 158.97liter) of oil every day. This is an astonishing figure which is nevertheless likely to be a considerable underestimate. Once all the oil use from military contractors, weapons manufacturing and all those secret bases and operations that are omitted from the official figures are factored in, the real daily usage is likely to be closer to a million barrels. To put the figures into perspective, US military personnel on active service make up around 0.0002% of the world’s population, but are part of a military system which generates around 5% of the world’s greenhouse gas emissions.

Much of these emissions are from the military infrastructure that the US maintains around the world. The environmental cost of war itself is considerably higher.

The environmental damage caused by war is not limited to climate change. The effects of nuclear bombing and nuclear testing, the use of Agent Orange, depleted uranium and other toxic chemicals, as well as land mines and unexploded ordinance lingering in conflict zones long after the war has moved on, have earned the military a deserved reputation as “the greatest single assault on the environment.” It has been estimated that 20% of all environmental degradation around the world is due to military and related activities.

Coincident with these environmental tragedies intensified by global warming, is the ongoing tradeoff in the US federal budget between militarized defense and genuine human and environmental security. The United States contributes more than 30 percent of global warming gases to the atmosphere, generated by five percent of the world’s population and US militarism. The pieces of the US federal budget pie that fund education, energy, environment, social services, housing and new job creation, taken together, receive less funding than the military/defense budget. Former Secretary of Labor Robert Reich has called the military budget a taxpayer-supported jobs program and argues for reprioritizing federal spending on jobs in green energy, education and infrastructure – the real national security.

Let’s turn the tide. Peace movements: start doing research to look into the military’s CO2 emissions and poisoning our planet. Human Rights activists: speak out cleary against war and destruction. Therefore I make a strong call to all Climate Activists of all ages:

‘Defend the Climate by becoming peace activist and anti-militarist’.