Canada Enlists in the U.S. Empire 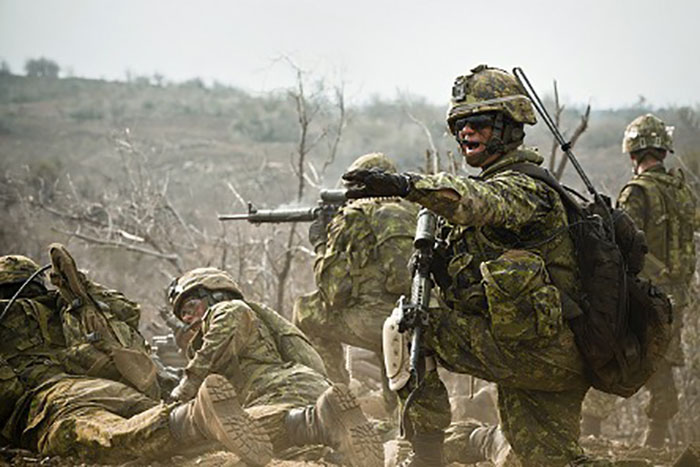 It seems the allure of empire is just too great. For many Americans, Canada is a peaceful, enlightened and progressive country with universal healthcare, affordable education, and what we thought was a slim, non-interventionist military funded by a sensible budget. They have their house in order, we thought. But while the notion of empire may be alluring, it is in fact cancerous. Canada is buying into global militarism, American-style. And make no mistake, “American-style” means under American direction and designed for corporate profit and protection.

The U.S. needs cover for its goals of economic and military dominance and Canada is willing to play the proxy, particularly in establishing military bases around the globe. Canada insists these physical plants are not bases, but rather “hubs.” The U.S. calls them lily pads. Small, agile bases that can quickly be scaled up allowing for a “forward posture” most anywhere in the world.

Recognizing the Canadian public may not be supportive of a movement toward global militarism, the government embraces non-threatening language. According to the official website of the Canadian Government, these bases are “operational support hubs” allowing people and material to be easily moved around the world to respond to crises like natural disasters. Fast, flexible, and cost-efficient, they assert. To aid victims of hurricanes and earthquakes. What’s not to like?

Currently there are four Canadian hubs in four areas around the globe: Germany, Kuwait, Jamaica and Senegal. Originally conceived in 2006, these hubs have been implemented and expanded in the ensuing years. It just so happens this plan fits perfectly with U.S. plans to engage in counter-insurgency efforts throughout the world, especially in the Global South. According to retired Canadian Col. Michael Boomer, an architect of the initial plan for operational support hubs, “It was absolutely influenced by the United States, but that’s nothing new.”

The Canadians and Americans apparently see eye to eye in managing challenges to global capitalism through use of their respective militaries and an aggressive building of global bases. According to Thomas Barnett, a former top advisor to U.S. Secretary of Defense Donald Rumsfeld, “Canada is a most useful ally. Canada is small militarily, but what you can have is an outsized role in the policing function, and do the U.S. a favor.” In a recent article in The Breach, Martin Lukacs writes of how Canada is to play a supporting role to the U.S. in policing, training, counter-insurgency, and special ops in the protection of western business interests. 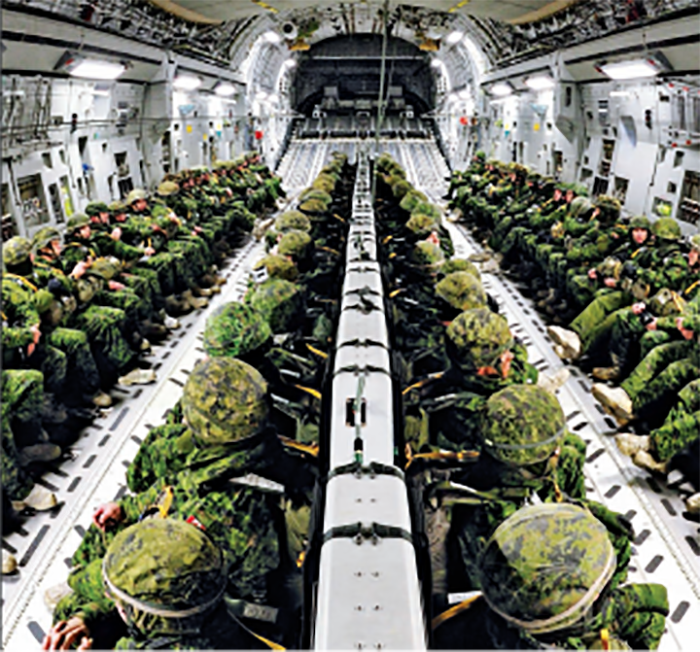 In 2017, the Canadian national government issued a 163-page report entitled, “Strong, Secure, Engaged. Canada’s Defense Policy.” The report covers recruitment, diversity, weapons and material purchases, cybertechnology, space, climate change, veterans affairs, and funding. But not the building of military bases. In fact, even the government-approved term “operational support hubs” is nowhere to be found in the extensive report. Reading it, one would think Canada’s military has no physical footprint other than within its own borders. However, what is mentioned frequently is working in close partnership with NORAD, NATO, and the U.S in meeting new and evolving challenges. Perhaps one is to extrapolate from there.

The Canadian Minister of Foreign Affairs at the time, Chrystia Freeland, stated in the report’s opening message, “Canada’s security and prosperity go hand-in-hand.” Innocuous language on its face, but in practice means a military on call for corporate development, exploitation, and profit. The Canadian base in Senegal is no accident. It is near Mali where Canada has recently invested billions in mining operations. Canada has learned from the best. The U.S. military is, to a large degree, an enormous corporate army, defending and expanding American business interests by the barrel of a gun.

Overseas bases don’t create peace and stability, but extremism and war. According to Professor David Vine, military bases displace indigenous peoples, pave over and poison indigenous lands, fuel local resentment, and become a recruitment tool for terrorists. They are a launching pad for unwanted and unnecessary interventions stoked by corporate influence. The surgical strikes promised turn into twenty-year wars.

Canada’s overseas bases are currently small, especially compared to U.S. bases, but the slide into global militarism can be a slippery one. Projecting military power abroad with a colossus like the U.S. could be intoxicating, perhaps too hard to resist. However, a quick review of disastrous U.S. interventions and wars across the globe should sober Canadian officials. What begins as a hub can end in a horror.

After spending more money on the war in Afghanistan than in rebuilding all of Western Europe after World War II, Americans leave behind a country in ruin headed for a return of Taliban rule. An estimated 250,000 people died in the 20-year war, with tens of thousands more perishing from disease and hunger. The humanitarian crisis that follows the American withdrawal will be shattering. Building overseas bases creates not only a “forward posture,” but a forward momentum to use them, too often with tragic results. Let American corporate militarism be the warning, not the model.