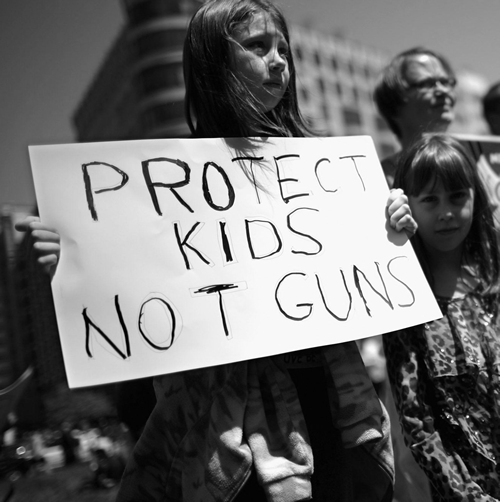 The power of mass demonstrations to mobilize activism and move those in positions of power is minimized, first and foremost, by those opposed to popular power. Do not listen to them. Make them listen to us!

Can you give two days to stop the slaughter of innocents and the shameless profiteering from their blood? If you can give more, so much the better. But by giving two days, you will guarantee that others will give more. You will be part of building the necessary momentum, the key ingredient in social change.

These are the two days to give: March 24 and November 11. If you can’t give those, or want more, pick some others. But here’s why I say those two, and why the top priority is to be in Washington, D.C., but just as important is to be visible everywhere else.

On March 24 in Washington, D.C., and elsewhere in the U.S. (and beyond?), students and teachers and everyone else who values lives over guns will march against gun violence. But the strategy will be weak unless millions of us uninvited marchers show up to augment the message with what it is not permissible to say. The culture of gun violence is fueled by the culture of militarism and by the military. A hugely disproportionate share of mass-shooters have beenU.S. military veterans. Some have been JROTC students. The recent killer in Florida was trained to kill by the U.S. Army in the very school where he killed. The JROTC’s “history” classes, the Army’s video games, the military’s role in producing Hollywood movies, the Pentagon’s unloading of old weapons on police departments and the general public — this is all done with our tax dollars. The NRA understands the connections perfectly, and churns out advertisements promoting more wars. If we don’t make the connections, we won’t win. So, bring these signs. And help us keep military recruiters out of schools.

By the way, March 24 was the day in 1999 when the United States and NATO began 78 days of bombing Yugoslavia. Here’s a discussion of exactly how destructive that was. Fittingly, March 24 is also International Day for the Right to the Truth concerning Gross Human Rights Violations and for the Dignity of Victims. A great day around which to create a new holiday tradition!

So, go sign up here! And (this is important!) politely encourage the organizers to acknowledge the existence of the JROTC.

Since the United States destroyed North Korea almost 70 years ago, November 11 has been called, in the United States, “Veterans Day.” This year, Donald Trump proposes to stage a giant parade of weaponry through the streets of Washington, D.C. But prior to the intense propaganda campaign around the brutal bombardment that leveled most North Korean cities, and to this day in much of the rest of the world, November 11 is known as Armistice Day, or in some places Remembrance Day.

At 11 o’clock on this 11th day of the 11th month, 100 years ago this year, World War I ended. It was a scheduled end to the war, with the killing and dying pointlessly continuing right up to that moment. The worldwide celebration after the armistice was euphoric. And those who had believed the propaganda about a “war to end all war” and those who had not were united in desiring to make it true. Armistice Day was for years promoted by the U.S. government among others as a day to work for global friendship and peace. Parading the instruments of death that suck down 60% of the budget Congress votes on each year is not a way to build friendship or peace.

But our “Armistice Day, Not Trump Day” will be weak if it includes only those who have learned to reject war propaganda and dedicated themselves to ending war and weapons dealing. We need, again, from the other direction, to make the connections. We need to include in our peace parade those who reject the militarization of schools, of police, or borders, and of entertainment. Those who care about the earth’s climate must not sit by while the single greatest contributors to climate change are paraded down Pennsylvania Avenue. Those who care about investment in human needs will metaphorically shoot themselves in the foot if they fail to oppose the glorification of wasting trillions of dollars on weaponry. Those who want safety need to earn it by demonstrating to the world that people in the United States do not agree with the policy of bombing foreign countries.

So, go sign up here, and invite people and organizations to do so too. And if we help prevent the Trumparade from happening, our celebration will go forward — even bigger and better!

Can Madness Be Cured By Marching?

“Madness in individuals is something rare;  but in groups, parties, nations, and epochs, it is the rule.” –Friedrich Nietzsche

The two marches planned for March and for November are the same march when seen from the perspective of a national psychiatrist. The racism, militarism, and extreme materialism they address are a single disease.

The U.S. has had mass shootings on military bases full of people with guns. The U.S. has filled its schools with armed guards, who have not prevented a single shooting but have criminalized children’s behavior. Proposing to put more guns into schools is not a sane proposal.

Other nations have banned guns, or banned the worst guns, and seen dramatic decreases in mass shootings. Throwing up one’s hands and exclaiming that nothing can be done is not the action of a population or sub-population that is thinking straight.

The U.S. puts almost as much money into war weaponry as the rest of the world combined, with much of the rest of the world buying U.S. weaponry pushed on it by a U.S. State Department turned into a weapons dealer. The result is anti-U.S. hostility at levels other nations can’t imagine going to such expense and effort to generate. Celebrating the weapons that endanger and impoverish is a form of sickness.

Each war kills large numbers of innocent people, disproportionately the very old and the very young. Each day, the vast majority of the people killed with U.S. weapons are outside the United States. Each war leaves a new area of the world devastated, more violent, and a greater threat to others.

When you’re in a hole, the first step is not to use explosives to dig faster.

There are some things, said Dr. King, to which we should insist on remaining maladjusted.

In a time of universal deceit, said George Orwell, telling the truth becomes an act of rebellion.

Can a large group of thoughtful, committed citizens change the world? Indeed, it is the only thing that ever has. 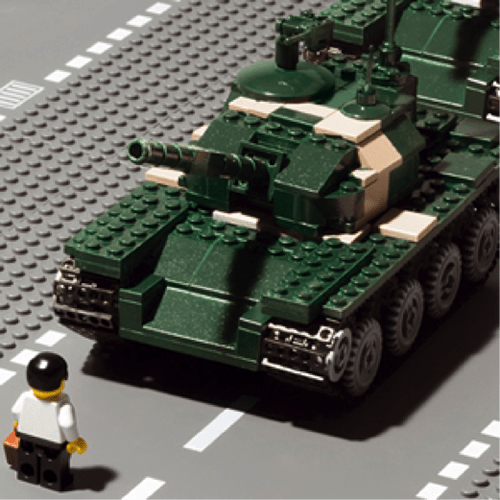