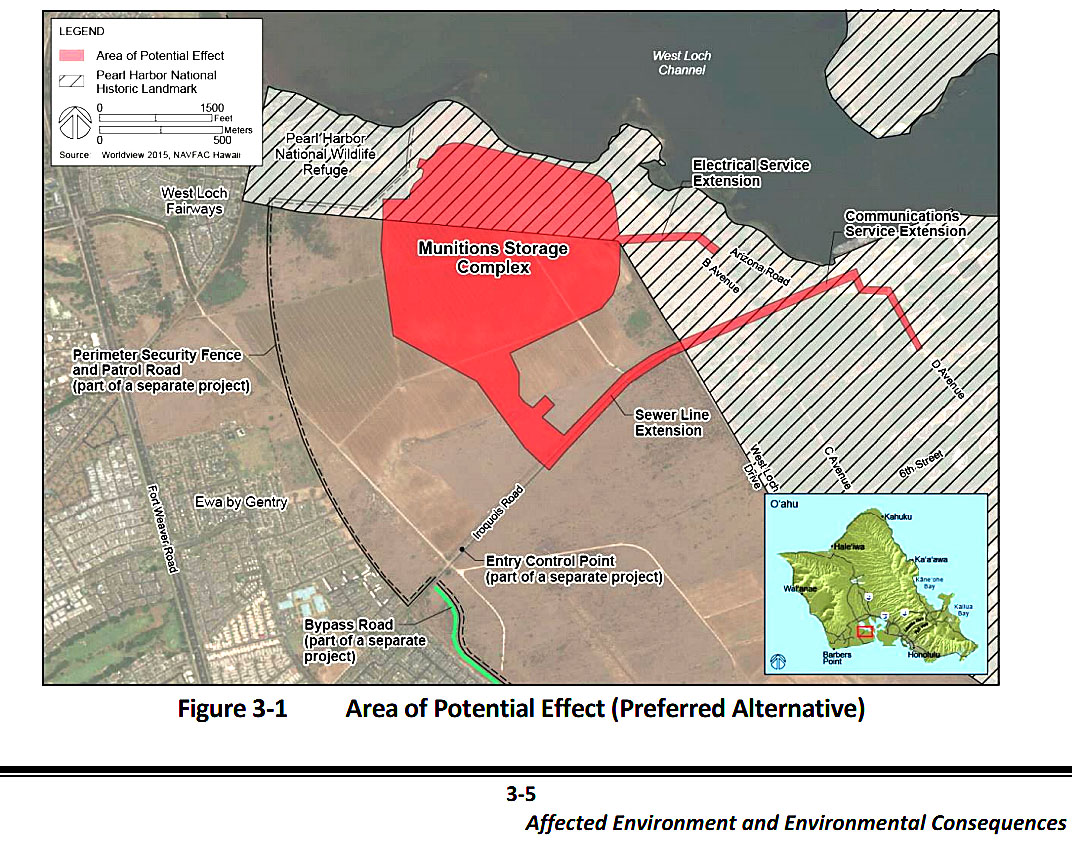 The United States Army plans to build an enormous weapons facility storing stockpiles of conventional warheads and explosives right next to the residential housing communities of Ewa Beach, Ewa Villages, West Loch Estates, and Ewa Gentry, as well as beside the Pearl Harbor National Wildlife Refuge in Hawaii. This Pacific island paradise already has the largest concentration of United States military bases and compounds in the country, making it one of the most militarized places on earth. Were it to secede from the Union, Hawaii would be a major military power on a global scale. And now, more weapons are on the way. A lot more.

The size, scope, and expense of this massive construction project must be considered, as well as the immediate danger placed on the residents of the surrounding communities. Equally important is whether the pre-positioning of such massive amounts of live warheads and munitions is in the interest and safety of the American public. Pre-positioning means ready to use. Locked and loaded. We’re off to war. This decreases the time for diplomacy and increases the likelihood of the weapons’ use. Do we really want to stockpile yet more weapons on this over-militarized island in preparation for the next big war? Is this a prudent strategy, or rash and perilous behavior?

In a 164 page report written by the Department of the Navy for the Army, titled “Finding Of No Significant Impact (FONSI) For The U.S. Army West Loch Ordnance Facilities At Joint Base Pearl Harbor-Hickman (JBPHH), Oahu, Hawaii,” the Navy states this project will include 27 new box type “D” magazines, eight modular storage magazines, administrative and operational facilities, accessory roads and concrete pads, utility service and distribution, site drainage, security features, and fire lines. For the record, a box type “D” magazine has an estimated footprint of 8,000 square feet. Again, there will be 27 of these. An 86,000 square-foot vehicle holding yard, a 50,000 square-foot vehicle inspection area, and a 20,000 square-foot residue storage warehouse are among the other larger items to be built.

Despite this massive construction project, the Navy asserts no significant direct, indirect, or cumulative environmental impact to the area. The Navy then doubles-down on the absurdity, stating the proposed facility would actually result in beneficial impacts to public health and safety, an interesting argument for the storage of millions of pounds of explosive materials not more than a half mile from a housing development.

The report continues in the same vein using language meant to be innocuous and reasonable, but which is deadly serious, by arguing the massive weapons complex will cause no impact to cultural resources, biological resources, socioeconomic conditions, and minimal impact to land use. The Department of the Interior even signed off on the environmental impact argument, thereby proving the obvious, that all branches of the government work for the Pentagon.

Explosive munitions would be on and off-loaded at this site from a variety of ships, trucked and forklifted to warehouses, and then carted back to other ships ready for war. An accidental explosion would be devastating to these residential communities, carrying the potential to kill and injure hundreds. Homes, businesses, parks and schools all would be in the blast zone, or the “explosion arc.”

Additionally, an accidental blast there could ignite even greater blasts at Pearl Harbor facilities and Hickam Field, a chain reaction of deadly explosions the Navy refers to as “sympathetic explosions.” The 1969 USS Enterprise fire near Pearl Harbor began when a Zuni rocket accidentally detonated under a plane’s wing and ignited additional munitions, blowing holes in the flight deck which allowed jet fuel to ignite the ship. Twenty-eight sailors were killed, 314 were injured, and 15 aircraft were destroyed at a cost of over $126 million. This accidental explosion occurred offshore and far away from residential neighborhoods. Such an explosion at this new facility would cause far greater loss of life and property.

Especially noteworthy about this new weapons facility is the shortened safety distance between the bomb storage buildings and the residential population, less than a half mile from the new Ewa Gentry North Park housing development. Other storage facilities such as Indian Island in Washington State and the Earle Ammunition Loading facility in New Jersey have far greater explosion arcs, while the Army MOTSU site in North Carolina has a 3.5 mile explosion arc. The recent accidental explosion in Beirut, Lebanon, though not of military munitions, left a blast zone of 6.2 miles. The data used to calculate these explosion arcs is, according to the Navy, classified. Additionally, the types of ammunition and exclusive amounts to be stored are also classified. And so, explosion arc is a term whose actual meaning is held in close confidence by the Navy. Trust us, they say.

At the end of their lengthy report, the Navy, not surprisingly, concludes there is no alternative but this. They have, so they argue, done their due diligence. Weapons must be brought here, a new facility must be built, there is no danger to the public or the environment. They are merely fulfilling their obligations under the law by planning, pre-positioning, and preparing for war. Rest assured, they seem to say, all is well. No reason to worry. You are in safe hands. The military is in control. Construction begins in 2022.