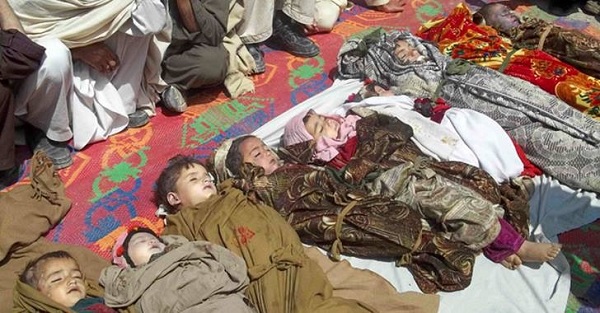 It’s been a dream of peace-loving people everywhere for over 20 years now for a U.S. government to end a war and to speak in support of having done so. Sadly, Biden is only partially ending one of the endless wars, none of the others having yet been fully ended either, and his remarks on Thursday were too glorifying of war to be of much use in the cause of abolishing it.

That said, one would not wish for Biden to bow before the belligerent demands of the U.S. media and escalate every possible war until all life on earth is ended on a day of record ratings and advertising revenue. It’s helpful that there is some limit to how far he’ll go.

Biden pretends that the United States attacked Afghanistan legally, justly, righteously, for noble motives. This is harmful false history. It seems helpful at first because it feeds into his “We did not go to Afghanistan to nation-build” schtick which becomes a basis for withdrawing troops. However, bombing and shooting people doesn’t actually build anything no matter how long or how heavily you do it, and actual assistance to Afghanistan — reparations in fact — would be a very appropriate third choice beyond the false dichotomy of shoot them or abandon them.

Biden pretends not only that the war was launched for good reason, but that it succeeded, that it “degraded the terrorist threat.” This is an example of going so big with a lie that people will miss it. The claim is ludicrous. The war on terrorism has taken a couple of hundred cave-dwellers and expanded them into thousands spread across continents. This crime is a horrendous failure on its own terms.

It’s nice to hear from Biden that “it’s the right and the responsibility of the Afghan people alone to decide their future and how they want to run their country.” But he doesn’t mean it, not with a commitment to keeping mercenaries and lawless agencies in Afghanistan, and missiles ready to do further damage from outside its borders. This has long been largely an air war, and you can’t end an air war by removing ground troops. Nor is it especially helpful to wreck a place and then declare it the responsibility of those left alive to run it now.

Not to worry, however, because Biden proceeded to make clear that the U.S. government would continue funding, training, and arming the Afghan military (clearly at a reduced level). He then recounted how he had recently instructed that government as to what it needed to do. Oh, and he plans to get other nations to control an airport in Afghanistan — in support of course of Afghanistan’s rights and responsibilities.

(He added as a side note that the U.S. would “continue to provide civilian and humanitarian assistance, including speaking out for the rights of women and girls.” This effort compares with what’s needed as Biden’s domestic health, wealth, environment, infrastructure, education, retirement, and labor efforts compare with what’s needed.)

All is well, Biden explains, and the reason the U.S. is helping people who collaborated in its evil occupation flee for their lives is simply that they don’t have jobs. Of course there isn’t anybody else anywhere in the world who doesn’t have a job.

If you make it this far into Biden’s firehose of BS, he starts sounding quite sensible:

“But for those who have argued that we should stay just six more months or just one more year, I ask them to consider the lessons of recent history. In 2011, the NATO Allies and partners agreed that we would end our combat mission in 2014.  In 2014, some argued, ‘One more year.’  So we kept fighting, and we kept taking [and primarily causing] casualties.  In 2015, the same.  And on and on. Nearly 20 years of experience has shown us that the current security situation only confirms that ‘just one more year’ of fighting in Afghanistan is not a solution but a recipe for being there indefinitely.”

Can’t argue with that. Nor can one argue with the admissions of failure that follow (albeit in conflict with the earlier claim of success):

“But that ignores the reality and the facts that already presented on the ground in Afghanistan when I took office: The Taliban was at its strongest mil- — is at its strongest militarily since 2001. The number of U.S. forces in Afghanistan had been reduced to a bare minimum.  And the United States, in the last administration, made an agreement that the — with the Taliban to remove all our forces by May 1 of this past — of this year.  That’s what I inherited.  That agreement was the reason the Taliban had ceased major attacks against U.S. forces. If, in April, I had instead announced that the United States was going to back — going back on that agreement made by the last administration — [that] the United States and allied forces would remain in Afghanistan for the foreseeable future — the Taliban would have again begun to target our forces. The status quo was not an option.  Staying would have meant U.S. troops taking casualties; American men and women back in the middle of a civil war.  And we would have run the risk of having to send more troops back into Afghanistan to defend our remaining troops.”

If you can overlook the total indifference to the vast majority of the lives at stake, the obsession with U.S. lives (but avoidance of fact that most U.S. military deaths are suicides, often after withdrawal from a war), and the pretense of innocently stumbling into a civil war, this is basically right. It also gives Trump a good deal of credit for locking Biden into partially getting out of Afghanistan, just as Bush forced Obama to partially get out of Iraq.

Biden then moves on to admitting that the war on terrorism has been the opposite of the success he claimed:

“Today, the terrorist threat has metastasized beyond Afghanistan.  So, we are repositioning our resources and adapting our counterterrorism posture to meet the threats where they are now significantly higher: in South Asia, the Middle East, and Africa.”

In the same breath he makes clear that the withdrawal from Afghanistan is only partial:

“But make no mistake: Our military and intelligence leaders are confident they have the capabilities to protect the homeland and our interests from any resurgent terrorist challenge emerging or emanating from Afghanistan. We are developing a counterterrorism over-the-horizon capability that will allow us to keep our eyes firmly fixed on any direct threats to the United States in the region, and act quickly and decisively if needed.”

Here we have the pretense that the wars follow the spontaneous generation of terrorism, rather than stimulating it. This is followed quickly by an expression of eagerness for other wars elsewhere despite the absence of any terrorism:

“And we also need to focus on shoring up America’s core strengths to meet the strategic competition with China and other nations that is really going to determine — determine our future.”

Biden closes by repeately thanking the troops for the “service” of wrecking Afghanistan, pretending Native Americans are not people and the wars on them not real and the war on Afghanistan the United States’ longest, and asking God to bless and protect and so on.

What could make such a presidential speech look good? The revolting reporters who ask questions aftrwards, of course! Here are some of their questions:

“Your own intelligence community has assessed that the Afghan government will likely collapse.”

“But we have talked to your own top general in Afghanistan, General Scott Miller.  He told ABC News the conditions are so concerning at this point that it could result in a civil war.  So, if Kabul falls to the Taliban, what will the United States do about it?”

In addition the U.S. media is now, after 20 years, interested in the lives of Afghans killed in the war!

“Mr. President, will the United States be responsible for the loss of Afghan civilian lives that could happen after a military exit?”

Better late than never, I guess.