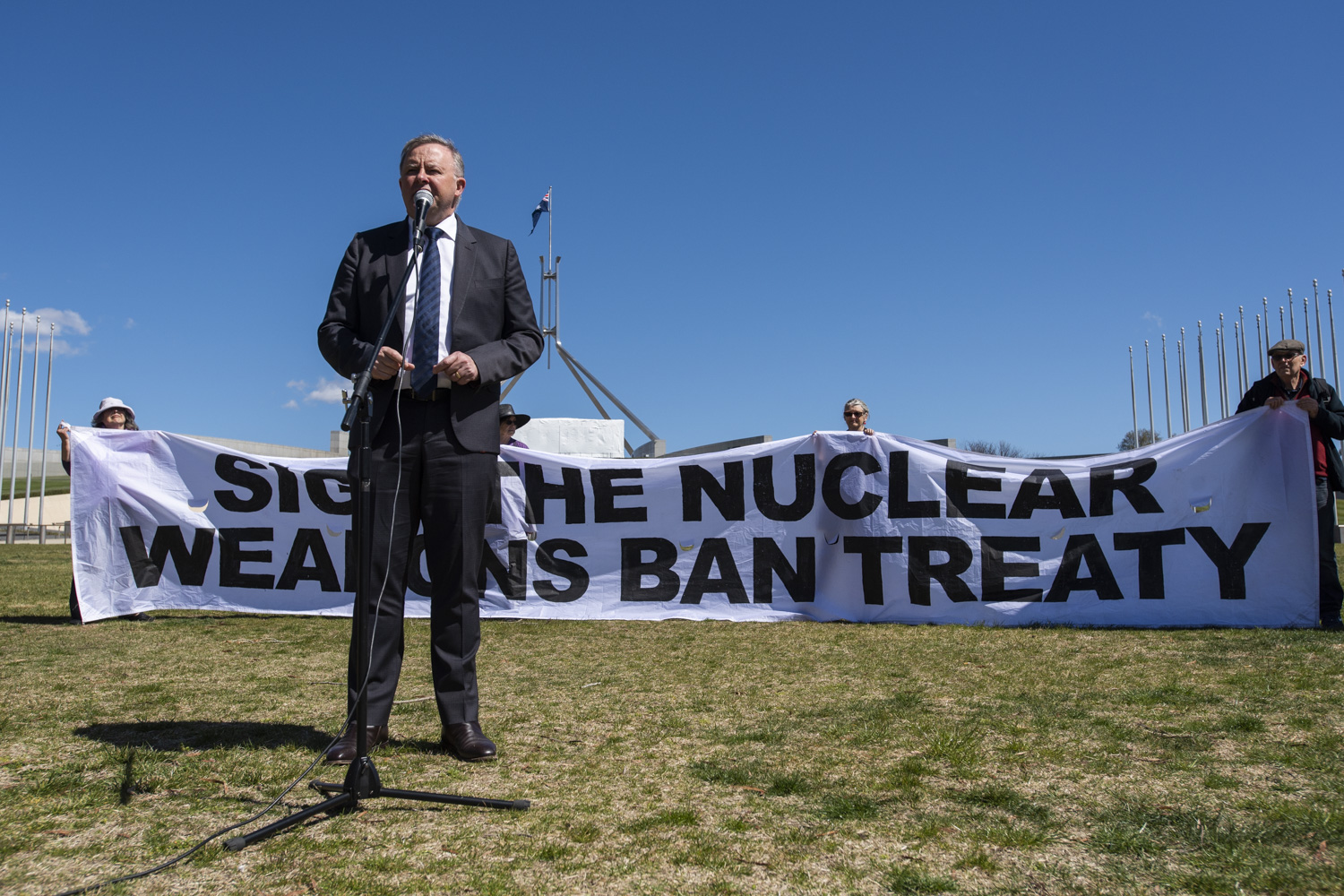 Australia is set to embrace the goal of a nuclear-weapon-free world under its newly elected prime minister, Anthony Albanese, who has been a vocal supporter of the Treaty on the Prohibition of Nuclear Weapons (TPNW). His centre-left Australian Labor Party, which won the greatest number of seats in the lower house of the federal parliament at polls on 21 May, made a pre-election pledge to sign and ratify the landmark disarmament treaty. Such a move would make Australia the first country currently under the United States’ so-called “nuclear umbrella” to become a TPNW state party.

A self-described member of the anti-nuclear movement “for more than four decades”, Mr Albanese introduced a motion at Labor’s national conference in December 2018 committing the party to sign and ratify the TPNW in government. In an impassioned speech to party members, he said: “I don’t argue that this is easy. I don’t argue that it’s simple. But I do argue that it’s just,” adding that it is consistent with the role that Labor governments have played internationally in the past. “Nuclear weapons are the most destructive, inhumane, and indiscriminate weapons ever created,” he said. “Today we have an opportunity to take a step towards their elimination.”

The motion was adopted with unanimous support. Responding to the arguments of those in his party who had been hesitant at first to commit to the treaty, Mr Albanese said that it was “not true” that becoming a state party would “interfere with” Australia’s relations with the United States. “The fact is that we can disagree with our friends in the short term, while maintaining those relations,” he said, citing as an example Australia’s ratification of the 1997 anti-personnel mine ban convention, which the United States had fiercely opposed at the time but now broadly accepts. One way to move nuclear-armed states forward on disarmament and build “universality of support” for the TPNW, he argued, “is by Australia playing a role”.

He conceded that “we need to take into account and work through a range of complex issues on enforcement, on effectiveness, and on verification”, but he noted that Article 4 of the treaty sets out a process for verifying the elimination of nuclear-weapon programmes and Article 3 stipulates safeguards “as strong as” those under the Non-Proliferation Treaty – a half-century-old agreement that has helped limit the spread of nuclear weapons to more countries. Quoting the UN secretary-general, António Guterres, Mr Albanese roundly dismissed the claim that the TPNW undermines this earlier treaty. “That’s not the view of the experts.”

He also underscored “the overwhelming support of the Australian people” for the TPNW, as demonstrated by successive public opinion polls. (The most recent such poll, conducted by Ipsos for ICAN in March 2022, found that 76 per cent of Australians believe that the government should sign the TPNW, with just 6 per cent against and 18 per cent undecided.) Furthermore, he noted, four in five federal Labor politicians, across party factions, have signed ICAN’s parliamentary pledge – a personal undertaking to work for Australia’s ratification of the treaty.

The Australian Labor Party reaffirmed its 2018 policy commitment on the TPNW at a special platform conference in March 2021, following the treaty’s global entry into force. Party branches in the states of South Australia, Tasmania, Victoria, and Western Australia, as well as in the Australian Capital Territory and the Northern Territory, have also passed motions reinforcing the national position, as have dozens of local branches across the country. According to Mr Albanese, Labor’s “carefully negotiated commitment” is consistent with its “values and our long history of advocacy on weapons of mass destruction”. It is, he said, “Labor at our best”. 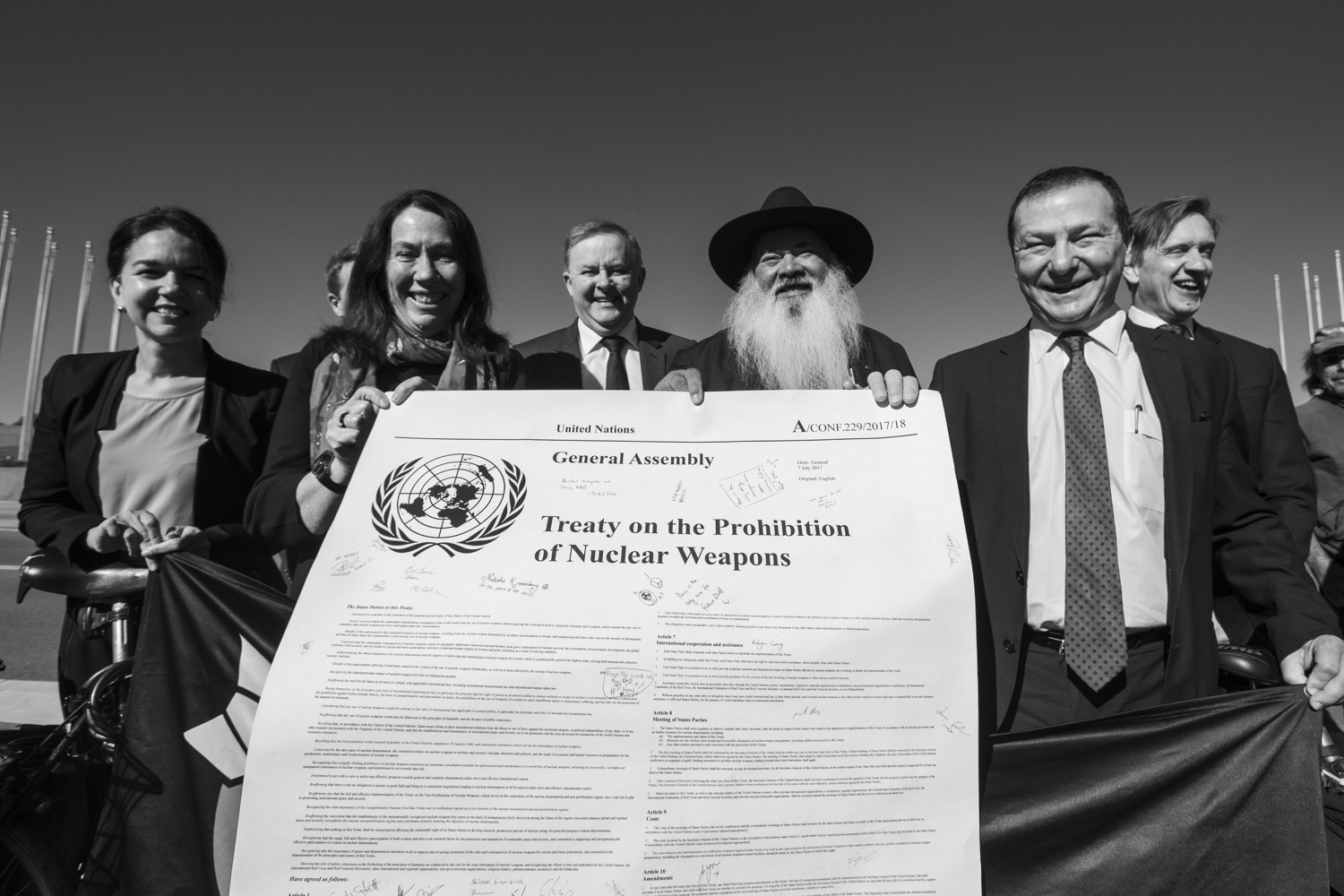 The path to the TPNW

In October 2016, when the UN General Assembly’s first committee adopted a resolution mandating negotiations on a “legally binding instrument to prohibit nuclear weapons”, Mr Albanese criticised the Australian government of the day for opposing it. Australia should attend the negotiating conference, he insisted, and “stop working to undermine this process”, warning that Australia’s absence would “tarnish our international reputation as a disarmament supporter”. He saw the negotiations as “a huge opportunity for the international community to make real progress towards a world free of nuclear weapons”.

When work on the draft treaty began in New York in March 2017, Mr Albanese told SBS News: “Negotiations to ban nuclear weapons are going to be difficult. But we also know if you aren’t inside the tent, participating in negotiations, you can’t influence the outcome.” He added: “Over the years, many hundreds of thousands of Australians have demonstrated their support for peaceful nuclear disarmament. Therefore, I think the Australian people will be disappointed that Australia is choosing to not even participate in the forum.”

In July 2017, following three weeks of intense negotiations, 122 countries voted to adopt the TPNW at the United Nations – a major breakthrough in multilateral disarmament efforts, which had been at a standstill for three decades. Having opted out of the process, Australia did not cast a vote. In Canberra a month later, as the Australian parliament resumed work following its winter recess, Mr Albanese joined a group of protesters outside the ministerial wing of parliament house with a banner that read: “While you were away, we banned the bomb. Now sign the treaty.”

Two months later, in October 2017, the Norwegian Nobel Committee announced that ICAN had won that year’s Nobel Peace Prize “for its ground-breaking efforts to achieve a treaty-based prohibition of [nuclear] weapons”. This, according to Mr Albanese, “should be a source of pride for Australia”, as the campaign was founded in Melbourne in 2007. “It is quite a remarkable achievement for an organisation essentially made up of volunteers, with very few resources, to make such inroads into changing public opinion and changing opinions of governments,” he said.

Later that month, Mr Albanese tabled a petition in the house of representatives appealing to the prime minister to join the TPNW. More than 90 community, religious, and human rights groups backed it, including Amnesty International, Oxfam, the National Council of Churches, the Australian Council for International Development, and the Australian Council of Trade Unions. “Nuclear weapons are the most destructive weapons on earth,” Mr Albanese said upon presenting the document. “They pose a threat so grave, they’re an existential risk to all humanity.”

In September 2018, on the first anniversary of the TPNW’s opening for signature, Mr Albanese addressed a rally of ICAN activists in Canberra who had ridden 900 kilometres from Melbourne on what they dubbed the “Nobel Peace Ride”. He thanked ICAN for promoting “locally, nationally, and internationally” the importance of a world free of the threat of nuclear weapons. “It is an example of Australian determination shaping international conversation.”

In January 2021, after the TPNW reached the threshold of 50 ratifications and entered into force, Mr Albanese reiterated Labor’s commitment to sign and ratify the treaty in government. He and Penny Wong, who will serve as Australia’s foreign minister in the new government, welcomed this “significant milestone” and congratulated ICAN on its role in reaching it. “Australia can and should lead international efforts to rid the world of nuclear weapons,” they said in a statement. Speaking at an ICAN event to mark the occasion, Mr Albanese added: “It is, I think, a good week for humanity” – referring not only to the TPNW’s coming into force, but also, obliquely, the end of the presidency of Donald J Trump one day earlier.

Mr Albanese’s views on nuclear weapons were shaped during his time as a political staffer to the late Tom Uren, who served as a Labor government minister in the 1980s and 90s. An icon of the party’s Left faction, he was a mentor to Mr Albanese. As a prisoner of war in Japan in World War II, Mr Uren witnessed the sky turn crimson over Nagasaki when a single atomic bomb reduced the city to smouldering ruins, killing more than 74,000 people. He later described the United States’ attacks on Hiroshima and Nagasaki as “crimes against humanity”, and dedicated himself to the cause of eliminating nuclear weapons from the world. In Mr Albanese’s words: “He came back, having fought for Australia, a fighter for peace and disarmament.”

In his final years, Mr Uren became a passionate supporter of ICAN’s work. In 2012, at the age of 91, he launched an ICAN exhibition in Melbourne, organised in partnership with the mayor’s office in Hiroshima, featuring artefacts from the atomic bombings, including melted glass bottles and the charred remains of a school uniform. Following Mr Uren’s death in 2015, ICAN established the Tom Uren Memorial Fund in his honour, to continue his legacy as a peacemaker. Mr Albanese launched it at Labor’s national conference in Melbourne and at parliament house that year and serves as a patron. Each year, he hosts a lecture for the fund.

Announcing the fund’s establishment in a speech to parliament, Mr Albanese said: “We must work together to disarm, so that, when nations have disputes, there is no chance that their arguments will get out of hand and lead to nuclear conflict.” He urged “the community to get behind the fund for the good of humanity and to recognise the lifetime of peaceful activism of my dear friend the late Tom Uren”. When the Australian Labor Party adopted its policy in support of the TPNW in 2018, Mr Albanese quoted his former mentor: “The struggle for nuclear disarmament is the most important struggle for the human race.” 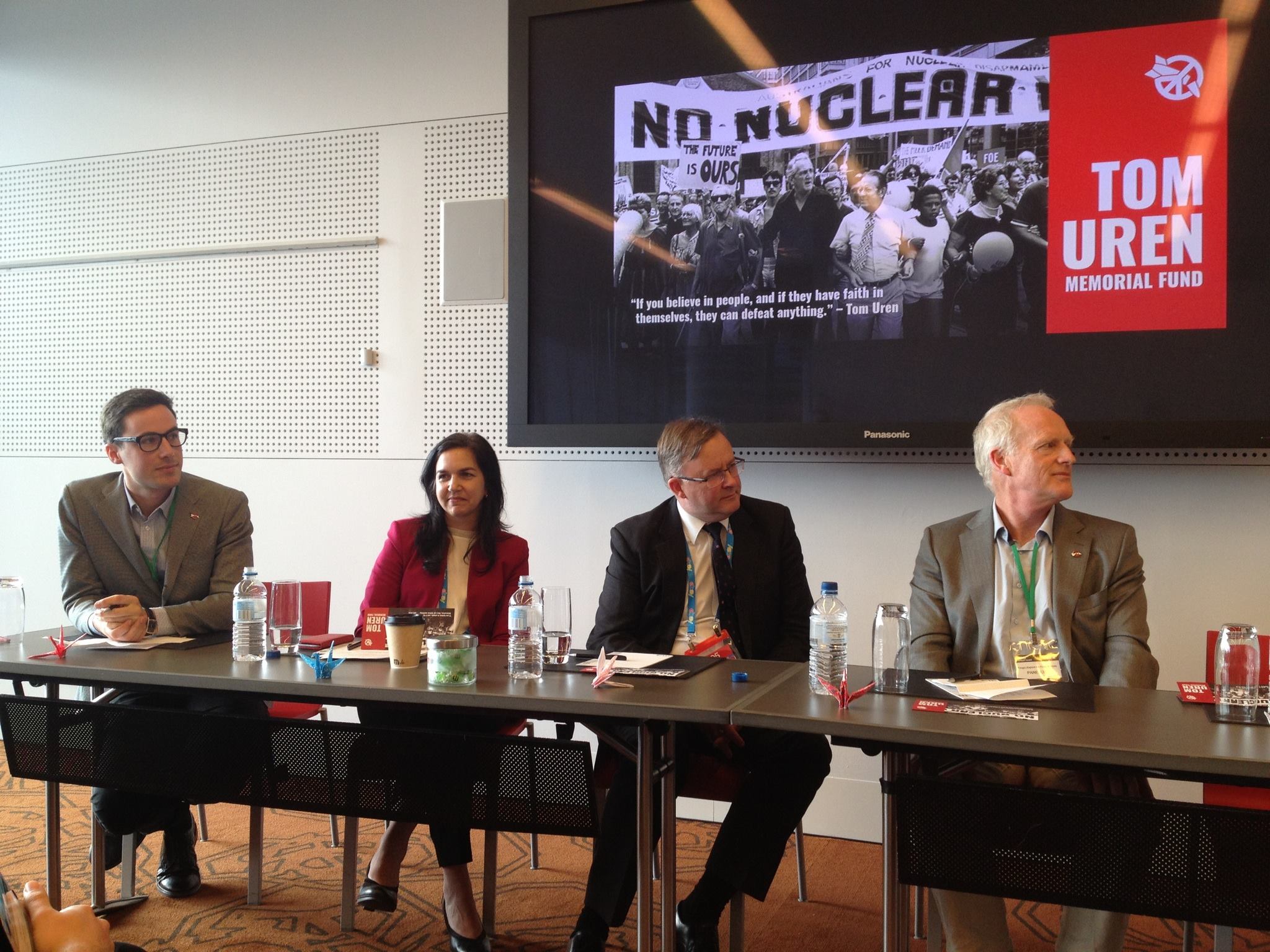