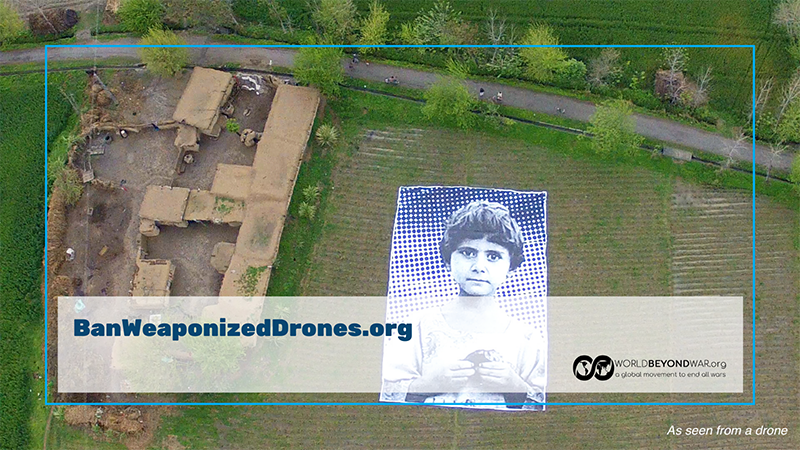 An artist in Pakistan attempted to make U.S. drone pilots face the fact that they were killing children.

Former President Barack Obama recently tweeted that the day of a school shooting was the worst day of his presidency. Well, it certainly shouldn’t have been a good day, but, seriously, what the filibuster? Was it a bad day because children were killed and he didn’t order their killing?

It’s bad enough having a drone murder program, but do we also have to go along with the pretense that it doesn’t exist, or the pretense that it’s been stopped? Until this week, the U.S. government was hiding this data for much of 2020 and 2021 on Afghanistan, Iraq, and Syria, leading some to imagine that drone strikes had stopped. Now that the data is available, we see a decrease but still massive bombings.

Drone wars are not what we’re told. Most missiles sent from drones have been part of wider wars, in places like Afghanistan. In other cases, numerous drone strikes have helped to create new wider wars, in places like Yemen. Most of the people targeted have neither been properly chosen (whatever that could mean) nor accidentally mistargeted, but rather not identified at all. See the Drone Papers: “During one five-month period of the operation, according to the documents, nearly 90 percent of the people killed in airstrikes were not the intended targets.” See Daniel Hale’s statement in court: “In some cases, as many as 9 out of 10 individuals killed are not identifible [sic].”

The slaughter has increased, rather than decreased or eliminated, anti-U.S. terrorism. Numerous top U.S. officials, usually just after retiring, have said that killer drones are creating more enemies than they kill.

The New York Times‘s articles about a drone strike in Kabul in August (that killed 10 people including seven children while the world’s media were focused on Afghanistan, making it a big story) and then about a 2019 bombing in Syria were presented, as usual, as aberrations. Now the Pentagon is again exercising the privilege to “investigate” itself. The Ahmadi family members killed in Kabul are an example of what’s gone on for years, not an aberration.

Anyone who has paid attention to decades of reporting, including on counts of missiles and bodies, should know that such coverage was misleading. See Brown University, Airwars, this analysis by Nicolas Davies, and this new article by Norman Solomon. In fact, the Times followed up with a report on the pattern in Syria, and then with a broader report on the U.S. military’s practice of understating the number of people it has killed.

While many missiles are not sent from drones, many are, and the existence of the drones makes reckless killing easier to market to the U.S. public. Myths generated with Hollywood’s help suggest that drones are crime-prevention, rather than crime-commission, devices. Fantasies about identifying targets, having no possible way to arrest them, and knowing that they are going to commit mass-murder within minutes if not blown to bits are openly admitted to be fantasies by their creators.

Some in the U.S. military would like to begin using drones that launch missiles without any human involvement, but in both moral and propaganda terms we’re already there: the orders to fire are mindlessly obeyed (here’s a video of former drone “pilot” Brandon Bryant recounting having killed a child), and when the military is compelled to “investigate” itself, as with the strike on Kabul, it concludes that no human being is to blame. The Pentagon made false claims about the Kabul strike — even calling it “righteous” — until after the New York Times report, then “investigated” itself and found everyone involved blameless. We’re so far removed from transparent self-governance, that the possibility of making the drone videos public and allowing us to do our own “investigations” of them isn’t even raised.

“We, the undersigned organizations and individuals, urge