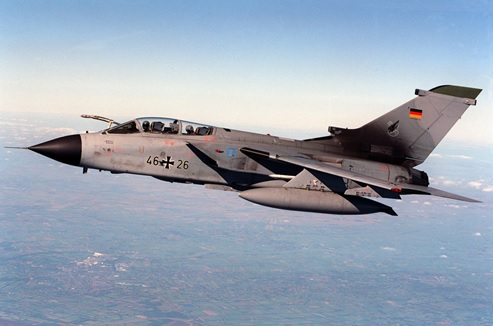 WBW’s Pat Elder is encamped with antinuclear resisters just outside the gate of Büchel Airbase in Germany and he sends us this report.

Early in the morning, when I approached this sprawling airbase that employs 2,000 civilians and soldiers, the bucolic setting was reminiscent of the rolling foothills of the Blueridge Mountains in western Maryland and Virginia. Scattered large, well-kept farmhouses amid the beautiful rolling land planted in wheat and corn reflected this prosperous and peaceful country.

The Airbase (Der Fliegerhorst Büchel) is located in the Rhineland-Palatinate region of western Germany, about 60 km from the border with Belgium and Luxembourg. About 20 US thermonuclear nuclear weapons, fitted to the German Luftwaffe’s Panavia Tornado fighter jet, are ready to be deployed in a moment’s notice. German pilots will take off with these weapons if the order comes from President Trump through NATO. The Germans will drop them on their targets, presumably in Russia.  The Tornado is capable of delivering the B-61 nuclear bomb with a yield of up to 180 kilotons.  That’s 12 times the size of the Hiroshima blast.

Everything seemed normal very early this morning until I reached the access road to the main gate of the base located off a sleepy country road. A stream of cars carrying German soldiers and civilians proceeded into the base at a snail’s pace. As the traffic that engulfed me inched closer, I heard the deafening noise of the Tornado as it lifted off the runway just a few hundred meters away. It is a ghastly and frightening assault to the ears, Like Dylan described,

I heard the sound of a thunder, it roared out a warnin’
Heard the roar of a wave that could drown the whole world.

After several minutes of single-lane bumper-to-bumper traffic I came within a hundred meters of the main gate and took a sudden and sharp right into the Peace Camp. This is one of the most extraordinary places on earth. 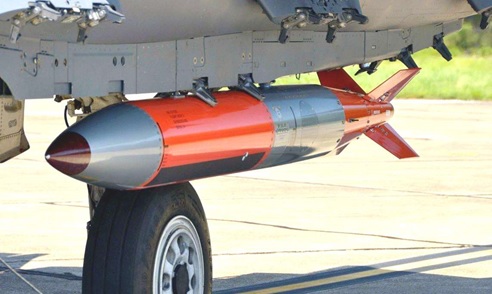 A prototype B61-12 with its newly designed GPS-guided tail-kit.

The Peace Camp is located on public land adjacent to the base, completely shrouded by a healthy hedge of brush and trees. It has been here, on an acre of land, for five years. There are several camper-trailers and a few large tents with bathrooms and a kitchen. The place has a solar panel that provides electricity to power the satellite and electronic devices. The internet these peaceniks have developed is lightning fast.  Leave it to Germans. I’m impressed with this country. Everything is better here.

I think this Peace Camp and the Peace Park, on the corner at the entrance to the base, demonstrate the guilty conscience of the German people. These great people, perhaps the pinnacle of human civilization, have learned many lessons in their tumultuous history, but this may be beyond their comprehension and/or resolve. They don’t have the courage to stand up to the American empire.

The organization behind the Peace Camp and the Peace Park is the Nonviolent Action Nuclear Weapons Abolition (Gewaltfreien Aktion Atomwaffen Abschaffen, GAAA). It has organized a remarkable twenty weeks of actions to represent the twenty nuclear bombs readied to kill millions. Vigils, rallies, prayer services, flyering, mass demonstrations and civil disobedience actions have been planned for the period that extends to August 9, 2018, Nagasaki Day. People and groups from throughout the continent check in and out. These peace warriors and prophets were greatly encouraged by the Nobel Peace Prize awarded to the International Campaign to Abolish Nuclear Weapons (ICAN). The leaders, including Marion Kuepker, say they are emboldened by the UN Nuclear Non-Proliferation Treaty. This coming weekend a half-dozen local churches, with a healthy mix of Catholics and Protestants, are expected to bring 500 parishioners to the main gate for religious services. Last year, a Catholic Mass brought 60 to the main gate.

The Peace Park is positioned on the corner off the main road that all traffic must pass when it enters the base. The Peace Park carries a strong religious message, reflecting the region’s Catholic identity. 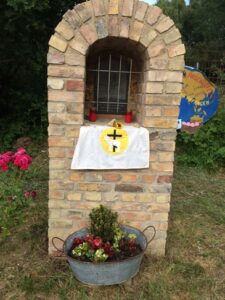 This Catholic shrine in the Peace Park is seen by 2,000 soldiers and civilians as they enter Büchel every day. It is just 200 meters from the main gate. 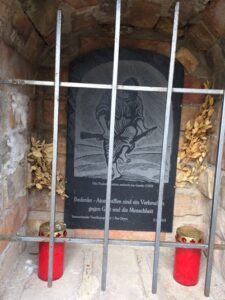 The shrine depicts Jesus breaking a gun in two. It says, “Think – Atomic weapons are a crime against God and Humanity.”

The Trump administration is in the process of  upgrading the nuclear arsenal at Büchel. The Americans plan to produce the new B 61-12 nuclear weapon by 2020. The B 61-12 will also be deployed with NATO forces in Germany, Italy, Belgium, Holland, and Turkey.

The B 61-12’s thermonuclear warhead will reportedly have a maximum yield of approximately 50 kilotons, (three times Hiroshima) but war planners are expected to be able to reduce that using a so-called “dial-a-yield” feature that effectively limits the extent of the nuclear reaction when the weapon detonates. The weapons may be as small as 0.3 kilotons – about 2% of the size of the 15-kiloton bomb the United States dropped on Hiroshima. This feature makes nuclear warfare much more likely – and much more attractive for use as a strategic weapon.

There is often confusion between “tactical” nuclear weapons and the traditional “strategic” nuclear weapon. The new B 61-12 may be considered a tactical nuclear weapon because its blast is generally smaller, and it is designed to be used on a battlefield after a ground war has begun. A strategic nuclear weapon may be several hundred times larger than a tactical weapon and is designed to completely destroy an enemy’s ability to exist or wage war. The largest strategic weapon in the US stockpile is the B-83 with a yield of 1.2 megatons, about 80 times the size of the Hiroshima bomb.

Since the end of World War II, the Germans have dealt heavily with matters of conscience. Germany committed itself in the Non-Proliferation Treaty of 1970 and all fractions of the Bundestag voted in 2010 for the disarmament of nuclear weapons. Last year 122 states voted for a UN nuclear weapons ban, while Germany abstained.

About 50 German peace groups are involved in a long-term campaign to prevent the switch to the more user-friendly B 61-12. There is a deep and genuine fear of this new weapon. The core element of the campaign is the Declaration of Commitment signature campaign where people declare
on the website:

I will come to Büchel once a year and take part in an action until nuclear weapons are withdrawn, and I will actively commit to seeking a nuclear weapons-free world in the place where I am living.”

The brilliant German organizers are holding an international week of action next week, from July 10th to the 18th.  If you are interested in joining, please contact: Marion Kuepker: mariongaaa@gmx.de

World BEYOND War is honored to be associated with these actions. 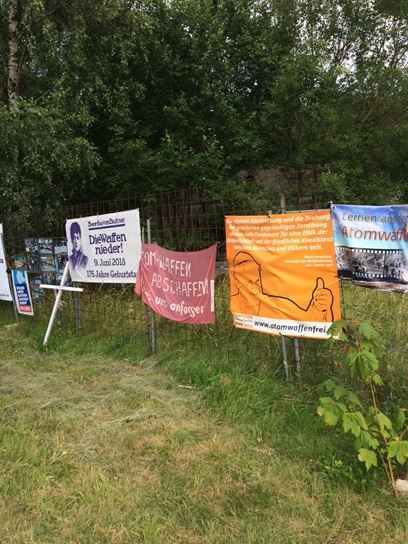 Speaking of nuclear weapons, Pope Francis has categorically condemned not only “the threat of their use” but also “their very possession.”