Accelerating The Transition To An Alternative Security System

(This is section 62 of the World Beyond War white paper A Global Security System: An Alternative to War. Continue to preceding | following section.) 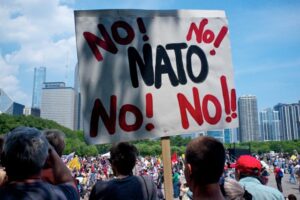 Protesters against the NATO military alliance in Chicago – May, 2012. (Photo courtesy FJJ.)

World Beyond War intends to accelerate the movement toward ending war and establishing a peace system in two ways: massive education, and nonviolent action to dismantle the war machine.

If we want war to end, we are going to have to work to end it. Even if you think war is lessening – by no means an uncontroversial claim – it won’t continue doing so without work. And as long as there is any war, there is a significant danger of widespread war. Wars are notoriously hard to control once begun. With nuclear weapons in the world (and with nuclear plants as potential targets), any war-making carries a risk of apocalypse. War-making and war preparations are destroying our natural environment and diverting resources from a possible rescue effort that would preserve a habitable climate. As a matter of survival, war and preparations for war must be completely abolished, and abolished quickly, by replacing the war system with a peace system.

To accomplish this, we will need a peace movement that differs from past movements that have been against each successive war or against each offensive weapon. We cannot fail to oppose wars, but we must also oppose the entire institution and work toward replacing it.

World Beyond War intends to work globally. While begun in the United States, World Beyond War has worked to include individuals and organizations from around the globe in its decision making. Thousands of people in 90 countries have thus far signed the pledge on the WorldBeyondWar.org website to work for the elimination of all war.

War does not have a single source, but it does have a largest one. Ending war-making by the United States and its allies would go a very long way toward ending war globally. For those living in the United States, at least, one key place to start ending war is within the U.S. government. This can be worked on together with people affected by US wars and those living near U.S. military bases around the world, which is a fairly large percentage of the people on earth.

Ending U.S. militarism wouldn’t eliminate war globally, but it would eliminate the pressure that is driving several other nations to increase their military spending. It would deprive NATO of its leading advocate for and greatest participant in wars. It would cut off the largest supply of weapons to Western Asia (a.k.a. the Middle East) and other regions. It would remove the major barrier to reconciliation and reunification of Korea. It would create U.S. willingness to support arms treaties, join the International Criminal Court, and allow the United Nations to move in the direction of its stated purpose of eliminating war. It would create a world free of nations threatening first-use of nukes, and a world in which nuclear disarmament might proceed more rapidly. Gone would be the last major nation using cluster bombs or refusing to ban landmines. If the United States kicked the war habit, war itself would suffer a major and possibly fatal set-back.

A focus on U.S. war preparations cannot work as well without similar efforts everywhere. Numerous nations are investing, and even increasing their investments, in war. All militarism must be opposed. And victories for a peace system tend to spread by example. When the British Parliament opposed attacking Syria in 2013 it helped block that U.S. proposal. When 31 nations committed in Havana, Cuba, in January 2014 to never making use of war, those voices were heard in other nations of the world.note1

Global solidarity in educational efforts constitutes an important part of the education itself. Student and cultural exchanges between the West and nations on the Pentagon’s likely target list (Syria, Iran, North Korea, China, Russia, etc.) will go a long way toward building resistance toward those potential futurewars. Similar exchanges between nations investing in war and nations that have ceased to do so, or which do so at a greatly reduced scale, can be of great value as well.note2

Building a global movement for stronger and more democratic global structures of peace will also require educational efforts that do not stop at national borders.

See “Educating the Many and the Decision and Opinion Makers”

Partial steps toward replacing the war system will be pursued, but they will be understood as and discussed as just that: partial steps on the way toward creating a peace system. Such steps may include banning weaponized drones or closing particular bases or eliminating nuclear weapons or closing the School of the Americas, defunding military advertising campaigns, restoring war powers to the legislative branch, cutting off weapons sales to dictatorships, etc.

Finding the strength in numbers to do these things is part of the purpose of the collection of signatures on the simple Pledge Statement. World Beyond War hopes to facilitate the forming of a broader coalition suited to the task. This will mean bringing together all those sectors that rightfully ought to be opposing the military industrial complex: moralists, ethicists, preachers of morality and ethics, religious community, doctors, psychologists, and protectors of human health, economists, labor unions, workers, civil libertarians, advocates for democratic reforms, journalists, historians, promoters of transparency in public decision-making, internationalists, those hoping to travel and be liked abroad, environmentalists, and proponents of everything worthwhile on which war dollars could be spent instead: education, housing, arts, science, etc. That’s a pretty big group.

Many activist organizations want to stay focused in their niches. Many are reluctant to risk being called unpatriotic. Some are tied up in profits from military contracts. World Beyond War will work around these barriers. This will involve asking civil libertarians to view war as the root cause of the symptoms they treat, and asking environmentalists to view war as at least one of the major root problems — and its elimination as a possible solution.

Green energy has far greater potential to handle our energy needs (and wants) than is commonly supposed, because the massive transfer of money that would be possible with the abolition of war isn’t usually considered. Human needs across the board can be better met than we usually imagine, because we don’t usually consider withdrawing $2 trillion a year globally from the world’s deadliest criminal enterprise.

Toward these ends, WBW will be working to organize a bigger coalition ready and trained to engage in nonviolent direct action, creatively, generously, and fearlessly.

See other posts related to “Accelerating The Transition To An Alternative Security System”:

* “Educating the Many and the Decision and Opinion Makers”

Notes:
1. See more on the Community of Latin American and Caribbean states at: http://www.nti.org/treaties-and-regimes/community-latin-american-and-caribbean-states-celac/ (return to main article)
2. Peace Scientist Patrick Hiller found in his research that experiences abroad of U.S. citizens led them to better recognize U.S. privilege and perception around the world, to understand how perceived enemies are dehumanized in the U.S. main narrative, to see ‘the other’ in a positive way, to reduce prejudices and stereotypes, and to create empathy. (return to main article)