World Beyond War has created a set of online interactive maps to help us all see where and how war and preparations for war exist in the world today. Included are wars, troops, weapons shipments, military spending, particular weapons, and respect for the rule of law.

You can find the maps we’ve created thus far here and send us your ideas for more maps here.  We’ll be updating some of these maps with new data every year and displaying animation of the progress away from war or the regress toward more war as the case may be.

The following are still screen-shots of some of the maps available in interactive form at the link above.

This map displays annual spending on war and war preparations. When you view the interactive version, the key at the bottom left is adjustable. Here the darkest color is set to $200 billion. You can raise or lower it. Or you can click on one of the colored squares and change the colors if you don’t like blue.  When you run the cursor over one of the countries on the interactive version it will give you details. You can also choose to see the same data as a graph without the map by clicking the full-screen symbol on the graph at the top of the page. Then you’ll see this: 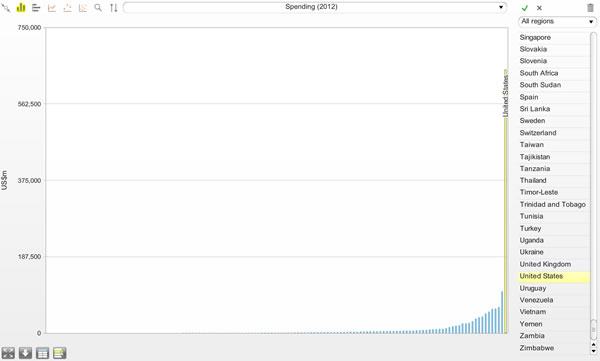 At the moment, the nation “United States” has been clicked on. The bar for the United States is noticably larger than for the other nations. It would be about twice as high if all U.S. military spending were included. But then at least some of the other nations’ would be higher as well. The data used here for the comparison across nations comes from a report called “The Military Balance” by IISS. By comparing, as well as possible, absolute spending dollars, it becomes clear that the U.S. military dwarfs all others. Maps and charts that show military spending as a percentage of GDP (of a nation’s economy) have their own use, but they seem to imply that if a government has more money if can buy more weapons without becoming more militaristic, that in fact it will become less militaristic if it does not buy more weapons.

Another way to look at spending on war and war preparations by national governments is as a per-capita figure. Perhaps nations with more people can make an argument in defense of more spending. Here’s a screenshot of that map:

The above map of military spending per capita has something in common with the basic spending map: The United States is still the darkest color. But China’s not a (very) distant second-place anymore. And the U.S. isn’t in first place anymore. It’s been edged out by Israel and Oman. And trailing right behind it are Saudi Arabia, Singapore, Kuwait, and the land of the Nobel Peace Prize: Norway, followed by Australia and the United (for the moment anyway) Kingdom.

Countries don’t just spend money on their own militaries. They also sell and give weapons to other countries. We’ve included a couple of maps displaying those nations that make the most weapons transfers to others. Here’s one, using data from the Congressional Research Service:

This just seems to be the United States’ night at the Oscars. But here the distant runners up are Russia, France, Germany, Italy, China, and the U.K. This gives us a different view of the weapons industries in these countries. They aren’t just arming their own governments. And they aren’t just arming wealthy allies either. Here’s a look at who’s arming poor nations:

We decided it was worth a particular look at where all the U.S.-made weapons are being shipped to. Here’s that map (all nations colored the same if they received any major weapons systems from the United States in 2012). Click it to go to the interactive versions:

We’ve also included at http://bit.ly/mappingmilitarism maps showing who has how many nuclear weapons and who has biological and chemical weapons. They might surprise you.

Because the United States does things that other nations do not, there are a number of U.S.-specific maps. For example: Here are nations with U.S. troops permanently stationed in them. The interactive version will give you the details. The data is from the U.S. military:

The above does not include special forces or the CIA or drone strikes. The few gray nations without U.S. troops permanently in them stand out, including Iran and Syria. Should Greenland be worried?

We’ve also included a map of U.S. military actions since 1945. It has quite a bit of color on it.

And we’ve included a series of maps indicating some level of national interest in replacing war with the rule of law. While the International Criminal Court is seriously flawed, it might be improved by greater membership, particularly by major war makers. Here is which countries are now members:

Also available is a map of which nations are party to the long-forgotten treaty that bans war, known as the Kellogg-Briand Pact. That membership ought to be very surprising. There’s also a map of which nations have ratified the Convention on Cluster Munitions banning the horrendously awful and murderous cluster bombs, a.k.a. flying landmines.

See if you find these maps useful, and let us know what you think is missing.

If you find projects like this one useful, please support them here.