Why the Deafening Silence on Cutting the Military Budget?

They all scream about the “deficit spending” and tax hikes that might be required to pay for these vital programs. From predictable right-wing corporatists to Hillary Clinton (“free stuff! free stuff!” she mocks) to fictional “left-leaning economists” invented by the New York Times, numerous voices scorn Bernie’s agenda because his proposals “cost too much.”

But nowhere do we find anyone willing to take on the biggest imperial welfare program of them all, the most obvious source of revenue for the programs needed to heal our nation: the military budget. If Sanders were willing to cut the military budget he’d encounter no criticism for raising taxes, because he’d have no need to raise taxes.  We hope that he’ll no longer pass up this opportunity to tell us how he would cut into a military budget that exceeds nearly all the rest of the world’s combined, and that largely has nothing to do with fighting terrorism (and so often makes it worse).

It’s not that Bernie doesn’t have a good answer for how he would pay for everything. He does, and it’s plenty clear and simple for an intelligent fourth grader, and possibly even Donald Trump, to grasp. But just try squeezing the following into a sound byte television response to “You want to raise my taxes!” 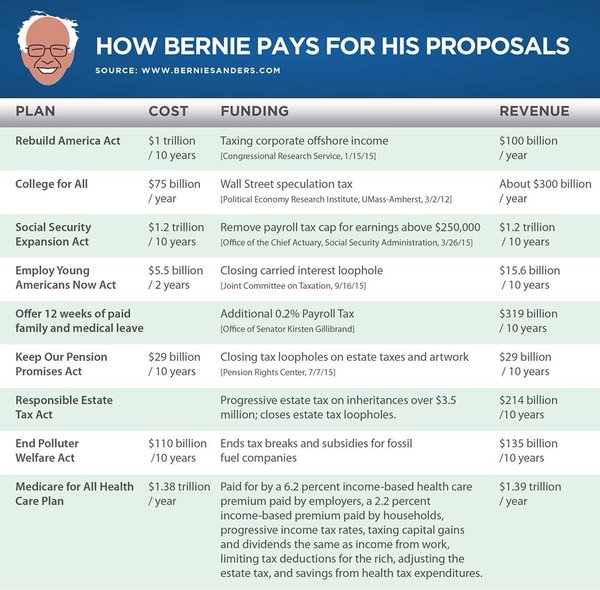 Even this lengthy list does not seem to straightforwardly explain that Medicare for All could raise your taxes, but would give you net savings as you dropped your health insurance payments.

For those who can get past sound bytes, Sanders’ proposals are good, and the taxes all needed for the sake of equitable sharing of wealth and power. But cutting the oceans of cash going to the armed forces is also needed for the purpose of slowing down the military industrial complex and its penchant for creating wars.

And there are projects that the United States and the world desperately need that aren’t listed above. Rather than more wars and occupations, the United States has a moral responsibility to begin a massive investment in actual humanitarian aid to the world, a world beginning to suffer from climate change driven more by the United States than any other nation, with the possible exception of the much, much larger nation of China.

The United States is currently extremely stingy in foreign aid by global standards, and a Marshall-Plan scale investment could work wonders in transforming world opinion about the U.S. government. A similar investment, much more than $100 billion per year, is needed in the United States for green energy. The possibility of creating a Solartopia is slipping away from us, while the cost of the Iraq war alone would have been enough to halt climate change.

Here are some simple, obvious ways to pay for all those programs Bernie advocates, and much much more:

If the military were scaled back even a little, in the direction of a purely defensive operation, we could create such a modern civilian conservation corps and, among other things, put solar panels on the rooftops of every building on earth.

There is, of course, much more that could be done to cut the military budget and pay for what we really need.  The vast bulk of military expenditures today have nothing to do with fighting terrorism. In many cases, the clumsy bludgeonings of our over-stuffed military actually promote it.

Yet this kind of discussion has not yet made it into the mainstream. We look forward to either journalists or brave nonviolent event disruptors inserting this topic into the endless election coverage.

David Swanson is an author, activist, journalist, and radio host. He is director of WorldBeyondWar.org and campaign coordinator for RootsAction.org.