WBW Podcast Episode 42: A Peace Mission in Romania and Ukraine 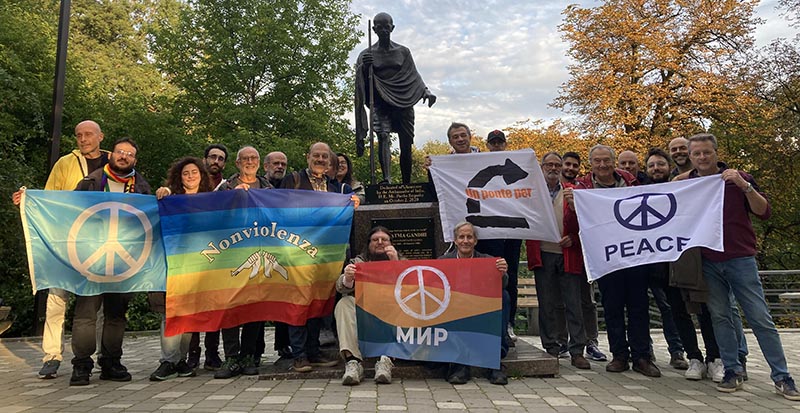 For the new episode of the World BEYOND War podcast, I spoke with John Reuwer, pictured above sitting in the center under the Gandhi statue in Kyiv, Ukraine with local peace activist and fellow WBW board member Yurii Sheliazhenko, about his recent journey to Central Europe where he met refugees and attempted to organize unarmed civilian resistance to the war that’s been raging since February of this year.

John is a former emergency physician who’s had successful experiences organizing nonviolent resistance in conflict zones as recently as in 2019, when he worked with Nonviolent Peaceforce in South Sudan. He first arrived in Romania to work with the PATRIR organization alongside experienced peacebuilders such as Kai Brand-Jacobsen but was surprised to find a widespread belief that only more war and more weapons could protect Ukranians from Russian attack. We spoke in-depth during this podcast interview about the situation of Ukranian refugees in neighboring countries: more priviliged Ukranian families may be comfortably housed in friendly homes, but refugees of color are not treated the same, and problems eventually surface in all refugee situations.

John found the best hope for unarmed civilian resistance against war in the non-political movement to avoid a disastrous nuclear meltdown at the Zaporizhzhya power plant, and urges volunteers to join this movement. We speak frankly during this podcast interview about the difficulties of nonviolent organizing inside the roiling cauldron of an active war. We also speak about the Europe’s trend towards remilitarization, and about the contrast John perceived with East Africa where the long-term horrors of endless war are more evident. Here are some worthwhile quotes from John:

“Peacebuilding activities now seem to have become a matter of how to keep traumatized Ukranian society coherent within itself and prevent conflicts within Ukranian society. There really wasn’t much talk of how to deal with trauma of the whole, of the war on both sides, or of ending the war.”

“We concentrate too much on who the bad guys are and not enough on what the problem is … the main cause of this war is that’s where the money is.”

“The dramatic difference between the US and even Ukraine and South Sudan was, in South Sudan, everyone had experienced the downside of war. You almost couldn’t meet a South Sudanese who couldn’t show you their bullet wound, their machete mark, or tell you a story of their neighbors running in terror as their village was attacked and burned, or been imprisoned or somehow harmed by war … they don’t worship war as a good in South Sudan. The elite do, but nobody on the ground liked war … generally people who suffer from war are more anxious to get over it than people who glorify it from a distance.”

World BEYOND War · A Peace Mission in Romania and Ukraine