Once an Air Force Base … 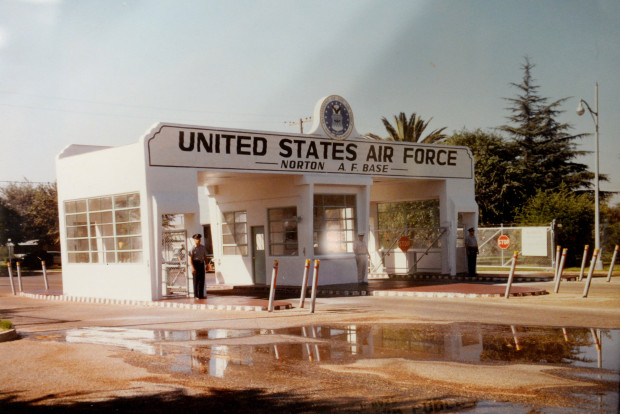 Lethal contamination at Norton Air Force Base in San Bernardino, California threatens human health 35 years after the base closed.

Norton Air Force Base was a logistics depot and heavy-lift transport facility, something like a massive Amazon warehouse to shuttle weapons of war around the globe. When the base shut down in 1994, the Air Force knew how poisoned the surrounding environment was, although few others were thinking that way. Norton began in 1940 as an Army Air Corps base. 79 years later, the base leaves a legacy of severely contaminated soil, groundwater, and surface water.

Arguably, the most lethal contamination left behind by the Air Force are Per- and Poly Fluoroalkyl Substances, or PFAS, used in the foam during firefighting exercises.

See the FINAL SITE INSPECTION REPORT FOR AQUEOUS FILM FORMING FOAM AREAS AT FORMER NORTON AIR FORCE BASE, August 2018. The site inspection was performed by Aerostar SES LLC for the Air Force Civil Engineer Center. The inspection set out to determine the concentrations of PFOA, PFOS, or the sum of both in groundwater and soil. The inspection was also charged with identifying potential human health drinking water pathways, and if necessary, mitigate impacts to drinking water.

The groundwater under the former base was found to be contaminated with PFOS at levels of 18.8 parts per trillion. Harvard scientists say 1 ppt is potentially dangerous. The samples were taken from deep below the ground – 229.48 to 249.4 feet below ground surface.  The discovery of these carcinogens 249.4 feet down suggests how far the chemicals have leached into the deeper aquifers since their presumed first use in 1970. The “forever chemicals” have flushed into the earth at the rate of 5 feet per year.

California has recently established notification levels for PFOS at 6.5 ppt and PFOA at 5.1 ppt for drinking water, meaning Norton’s groundwater is almost three times above that level.  The soil was found to contain 5,990 micrograms per kilogram (μg/kg) of PFOS, which is nearly five times higher than the voluntary EPA standard of 1,260 µg/kg. 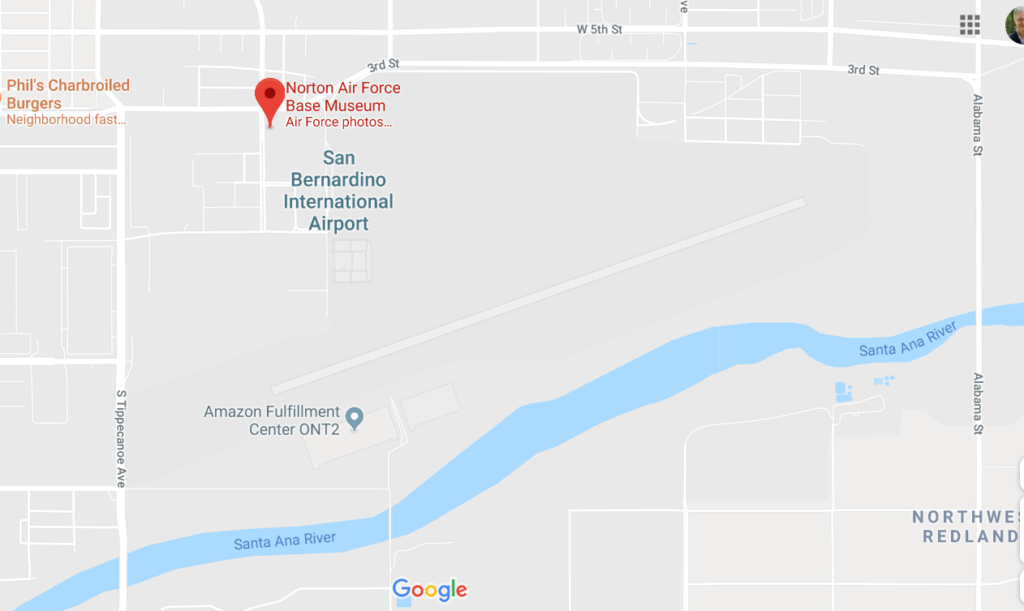 Today, the San Bernardino International Airport is located on the site of the former Norton Air Force Base. The runway stretches along the Santa Ana River. 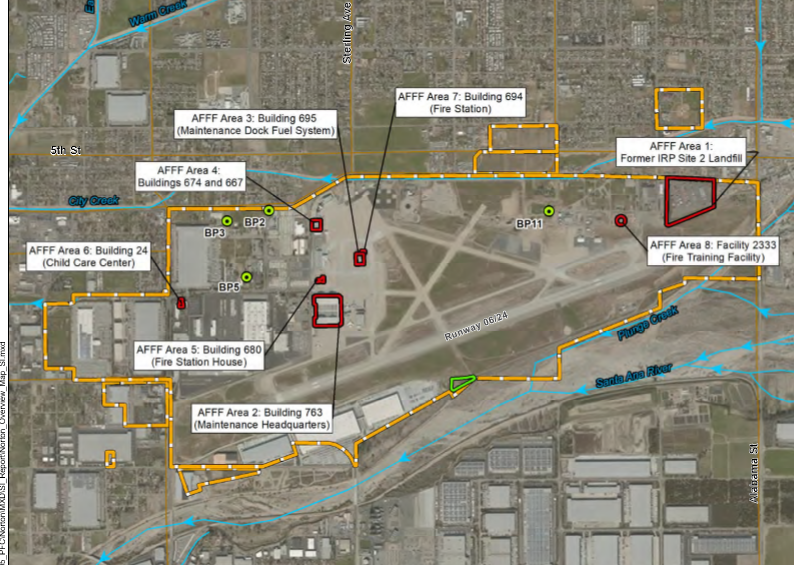 Eight locations at Norton Air Force Base were used for fire-fighting exercises. The sites are within a few thousand feet of the Santa Ana River. (AFFF is aqueous film-forming foam.) From the FINAL SITE INSPECTION REPORT FOR AFFF AREAS AT FORMER NORTON AIR FORCE BASE, August 2018.

The site inspection contains a comment and response section where regulators ask the Air Force for clarification and additional information. The Air Force maintains that the “drinking water exposure pathway is incomplete.”  In other words, the Air Force is saying there’s no way for PFAS to reach drinking water supplies. The EPA says it is premature to conclude this based on the information provided by the Air Force.

The EPA has asked the Air Force to provide more information regarding the migration of AFFF from the identified source areas since the time of the releases. Meanwhile, the Air Force claims the carcinogens have only migrated 4 miles, while the EPA questions that number, implying it should be much higher. The EPA is requesting the Air Force test domestic and public supply wells within 4 miles of the former base.

Most egregiously, the Air Force has withheld potentially damaging PFAS test results on soils and groundwater in source areas Building 694 and Facility 2333.  The Air Force also omits a discussion of a pump and treatment system operated for several years at Norton. It’s an important omission because the system impacted the migration of AFFF releases.  The EPA asked the Air Force to supply information on the location of the extraction wells in relation to AFFF source areas, how long they operated, how the water was treated and discharged, etc.

All these factors are crucial in determining the impact on public health.  The same kind of obfuscation is occurring at all levels of the Trump Administration, but here, their lies impact our health.

Below is a segment of the transcript between California water regulators and the Air Force. It provides an insight into the culture of contamination. Read the comments of Stephen Niou, California Department of Toxic Substances (DTSC) and Patricia Hannon of the Santa Ana Regional Water Quality Control Board. Then, read the responses from the Air Force. 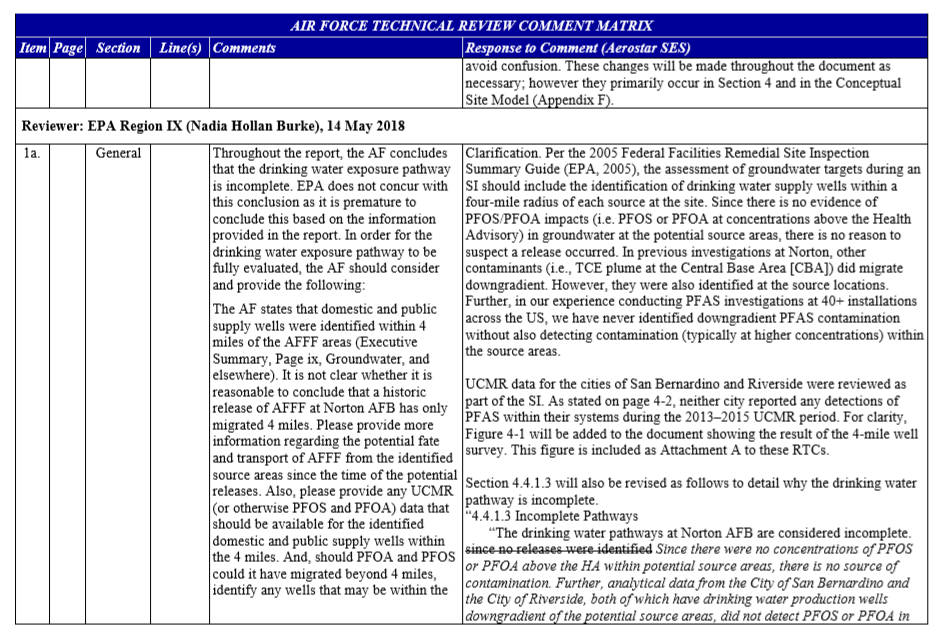 The Air Force is apparently laying down the law, “Concentrations of PFOS may pose a risk to human health. However, in the absence of legally enforceable federal or state standards, further action is not recommended until these standards are developed and promulgated. Because the risks to human health from PFAS in soil are not fully understood and there are no promulgated standards, mitigation recommendations are not currently warranted.”

The Air Force is reliant on the EPA and Congress to evade culpability while it continues to poison the public. The EPA’s performance at the local level, as demonstrated here, is praiseworthy, but its refusal, at the federal level, to set enforceable maximum contaminant levels for all PFAS chemicals is reprehensible. 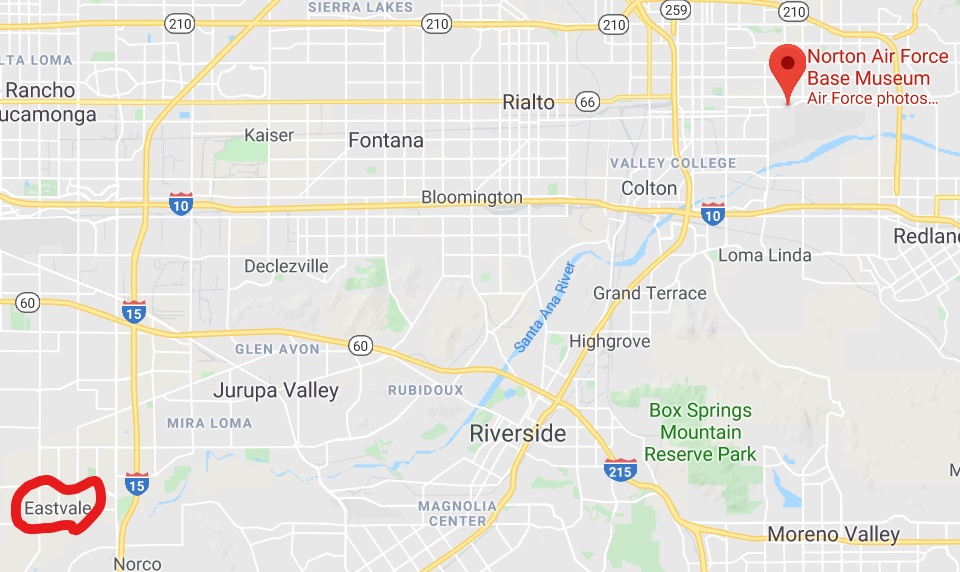 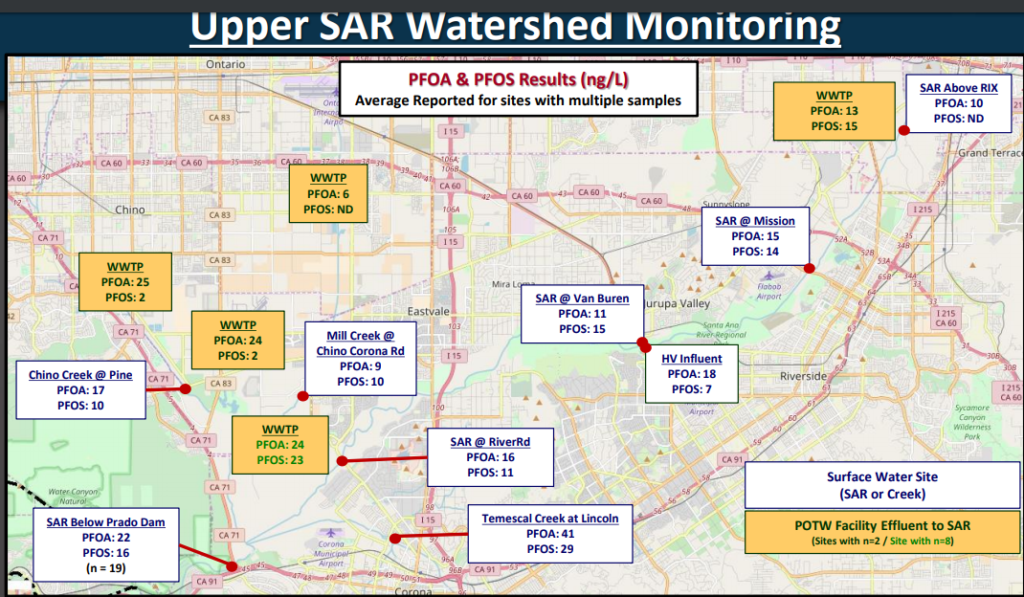 (Locate Eastvale in the center of the map and Corona at the bottom.) This graphic, produced by the Orange County Water District, shows the levels of PFOA and PFOS in the Santa Ana River Watershed. (WWTP is Wastewater Treatment Plant)

The former Norton AFB is located at the top right corner of this graphic. The Santa Ana River flows from the base to Corona. Notice the spike in the surface water readings near Corona at the bottom/center of the map. The region has two sources known to contaminate the environment with PFAS: the U.S. Air Force and the 3M corporation, located in Corona. 3M and the Air Force have been secretly poisoning the American public – and lying about it for two generations.

PFAS contamination of the Santa Ana region by Norton Air Force Base is just a fraction of the contamination associated with the site. Some of the most lethal chemicals known are present in the soil, groundwater, surface water, and the air in the region around Norton. The Air Force was careless in its stewardship of the land.

The following toxic chemicals are found at the former Norton Air Force Base. See the Agency for Toxic Substances and Disease Registry’s Toxicological Profiles for information on each contaminant.  These chemicals often make their way into our bodies to cause cancer, sickness, and death: