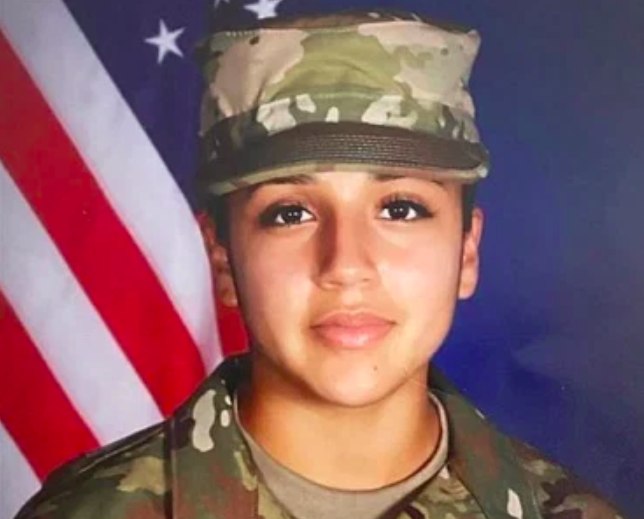 On April 20, 2020, U.S. Army SPC Vanessa Guillen was murdered by another soldier at Fort Hood Army base in Texas. She had been recruited while in high school and told that she would gain many opportunities by joining the military. She was not told of the long record of military sexual assault of recruits.

The risks to women and men on base or in training are less known than the trauma experienced by troops in combat, but 1 in 3 women have reported being sexually assaulted while in the military. Before her murder, Guillen confided to her mother that she had been sexually harassed by one of her superiors.

Following her death, Lupe Guillen, sister of Vanessa Guillen, commented “If you can’t protect them, don’t enlist them.” The Guillen family and the League of United Latin American Citizens (LULAC) have called for no one to enlist until there is a full independent investigation and the military is held accountable for its consistent disregard of its personnel.

Do youth in our area have access to knowledge about such unstated risks of military careers? High school students who are lower income are in particular targeted by recruiters who offer glowing reports of military life.

I work as the director of the nonprofit group, Truth in Recruitment, a project of the Santa Barbara Friends Meeting (or Quakers) that has long sought to reduce recruiter access to teenagers on high school campuses. In 2014, we partnered with the Santa Barbara Unified School District (SBUSD) to implement a school board policy that regulates recruiter access to students. The policy includes these restrictions: Recruiters from each branch of the military are limited to two visits a year with no more than three recruiters on campus at a time; recruiters cannot solicit contact information directly from students; no simulated weapons displays are permitted; an opt out form barring release of student directory information must be distributed; recruiters cannot disrupt normal school activities.

U.S. Representative Alexandria Ocasio-Cortez, Democrat of New York, recently proposed an amendment to the annual military spending bill that would block federal funding for the military to recruit in middle and high schools and request data about students. However, this would require further changes in federal law. Under the No Child Left Behind Act of 2001, high schools that receive federal funds must provide certain student contact information to military recruiters upon request and must allow recruiters to have the same access to students as employers and colleges. This law is often cited when school districts say that they cannot regulate recruiter access to their students and schools. But the key word in the law, which shows what is possible, is the word same. As long as school policies apply the same regulations to all types of recruiters, districts can implement policies that regulate recruiter access.

Other laws being planned may make young women/people identified female at birth even more vulnerable to the dangers of military life. Although there is currently no military draft, for the last four decades, men/people identified male at birth, between 18 and 26 years old, have been required to register with the Selective Service System for military conscription. There is now proposed legislation that also will require women to register for the draft.

The Selective Service System involves more than just registration. There are serious, life-long consequences for failing to comply. Currently, men who do not register with Selective Service can be fined up to $250,000 and serve up to five years in prison. They also become ineligible to receive college financial aid, federal job training, or federal employment. These punishments can have particularly life-altering effects on undocumented youth, as failing to register for the servuce also disqualifies them from U.S. citizenship.

Another current congressional proposal, rather than extending registration, is to abolish Selective Service registration altogether. In June, our organization met with U.S. Representative Salud Carbajal, a Marine Reserve veteran, and he agreed to attend a Town Hall, hosted by Truth in Recruitment, where he would listen to the concerns of the community about this choice Congress faces. The virtual town hall, “Will Congress Expand Military Draft Registration to Women?” will be on Thursday, September 3, at 6 p.m., with U.S. Representative Carbajal and speakers including students and veterans.

Truth in Recruitment firmly believes that instead of trying to expand draft registration to young women, Congress should end draft registration for all. Mandating women to register for a military draft does not support equality for women; extending coercive measures to women will not expand their opportunities, it will merely remove their option to choose.

Forcing young people to register subjects them to unexpected risks — boot camp alone can be a traumatizing and potentially life-threatening experience. Selective Service System registration has not been a given in past decades. Many have argued that it again be abolished. There is no reason to continue its existence or to widen registration by coercing new groups of people. Youth should have a choice in how to serve their communities and the nation.

All are invited to our virtual town hall with Congressmember Carbajal, who has stated his support for mandatory draft registration. Here is how to “attend” the Town Hall from the safety of your home or business via Zoom and Facebook Livestream:

Please register in advance for this meeting: TruthinRecruitment.org/TownHall

After registering, a confirmation email will be sent with information about joining the meeting.