Pinkerism and Militarism Walk into a Room 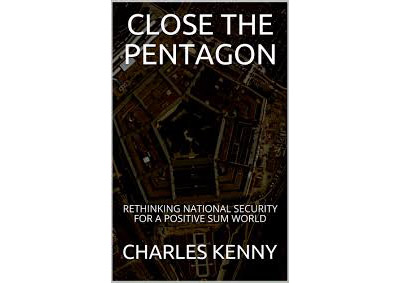 Charles Kenny’s book, Close the Pentagon, has an endorsement from Steven Pinker despite wanting to close something that Pinker rarely acknowledges exists.

This is a book to answer the question: What if someone who believed that war was only committed by poor, dark, distant people, and had therefore almost vanished from the earth, were to encounter the U.S. military and the U.S. military budget?

The answer is basically a proposal to move the money from militarism to human and environmental needs — and who doesn’t want to do that?

And if people who think war is almost gone and disappearing on its own can nonetheless be motivated to help end war-making by what they consider a bit player and what Dr. King correctly labeled the greatest purveyor of violence on earth, so much the better!

But a strategy to make it happen is going to need to be in greater contact with the real world than is a book that contains words like these: “If the U.S. wants to reduce the number of civil wars and their resulting spillovers . . . .”

In Pinkerist doctrine wars arise out of the backwardness of poor foreign countries that start up civil wars which then mysteriously spill over into terrorist attacks on the distant noble wealthy countries where coincidentally all the weapons come from but which haven’t been involved in the civil wars in any way at all.

So, our job, as the enders of war, is to explain to the rational entity called the United States that the best way for it to perform the public service on which it is so intent of reducing the number of civil wars is not through war.

Kenny’s book is almost an update of Norman Angell’s The Great Illusion, pointing out to us that war is irrational and impoverishing and counterproductive — as if it were once rational, and as if it will grow embarrassed about being irrational and therefore stop happening.

Here’s another phrase excerpted from the book (I don’t want to hit you with more than a phrase of this stuff at a time): “Although it was not fought for resources, the Iraq war — one of the very few inter-state wars of recent times . . . .”

Since World War II, during a supposed golden age of peace, the United States military has killed or helped kill some 20 million people, overthrown at least 36 governments, interfered in at least 84 foreign elections, attempted to assassinate over 50 foreign leaders, and dropped bombs on people in over 30 countries. The United States is responsible for the deaths of 5 million people in Vietnam, Laos, and Cambodia, and over 1 million just since 2003 in Iraq. Since 2001, the United States has been systematically destroying a region of the globe, bombing Afghanistan, Iraq, Pakistan, Libya, Somalia, Yemen, and Syria, not to mention the Philippines and other scattered targets (inter-state wars one and all). The United States has “special forces” operating in two-thirds of the world’s countries and non-special forces in three-quarters of them.

The United States has switched from presidents who pretended oil had nothing to do with it to one who says U.S. troops are killing in Syria purely to steal oil. That the fact that this is crazy should make it untrue just doesn’t hold up for anyone who’s ever come into contact with the U.S. government. Imagine announcing that the United States already has single-payer healthcare because not having it results in spending twice as much and getting worse healthcare. Imagine declaring that a Green New Deal simply exists and won’t have to be struggled for because it more than pays for itself. Wars are never just about oil, but the other reasons are equally loony: planting a flag and a base in another territory, creating a launching pad for the next war, profiting weapons dealers and election campaigns, winning votes from sadists.

For the Pinkerite, the major threat to peace in the modern age is “Russia invading Crimea” — through, you know, the violent voting of the Crimeans — which must never be repeated, not because the vote would go the same way every time, but because of all the casualties (3, possibly 4 paper cuts alone).

The reason that it matters how we think about wars, even when we agree on radically scaling back the primary war-maker on earth, is that wars are not created by poverty or resource scarcity. Wars depend principally on the cultural acceptance of and preference for wars. Wars are created by people who choose wars. Climate collapse does not create wars. Climate collapse in cultures that think you address problems with wars creates wars. Kenny agrees in the sense of believing war to be the wrong tool for the actual problems the earth faces. Yet he imagines that poverty creates wars among the other 96% (the human beings outside the United States). This steers us away from the need to move our culture away from acceptance of war. Read this remarkable statement:

“[T]he utility of a large, technologically advanced force like America’s to deal with civil war in the poorest countries or the terror threats that they may foster is limited: over half of all terror deaths worldwide in 2016 were in Iraq and Afghanistan –two countries which have been host to a considerable US military presence of late.”

It’s as if the military that has created hell in these places is merely a poor tool for bringing about paradise. We need a better tool for helping the poor dumb Iraqis stop killing themselves, rather than needing to cease invading and destroying countries. Keeping troops in Iraq with Iraq demanding they get out is not antidemocratic, murderous, and criminal; it’s just the wrong sort of tool to use to impose enlightenment on those people.

The U.S. war on Iraq ended, in Pinker’s view, when President George W. Bush declared “mission accomplished,” since which point it has been a civil war, and therefore the causes of that civil war can be analyzed in terms of the shortcomings of Iraqi society. “[I]t is so hard,” Pinker complains, “to impose liberal democracy on countries in the developing world that have not outgrown their superstitions, warlords, and feuding tribes.” Indeed it may be, but where is the evidence that the United States government has been attempting it? Or the evidence that the United States has such democracy itself? Or that the United States has the right to impose its desires on another nation?

After all the fancy footwork calculating our path to peace, we look up and see a war kill 5% of Iraq’s population just in the years after March 2003, or perhaps 9% counting previous war and sanctions, or at least 10% between 1990 and today. And far more deadly U.S.-supported wars in terms of absolute numbers in places like the Congo. And war has been normalized. Most people can’t name them all, much less tell you why they should be continued. Yet we have professors telling us every day that these wars don’t exist.