Over 150 Rights Groups, Including Close Guantánamo, Send A Letter to President Biden Urging Him to Shut the Prison on Its 21st Anniversary 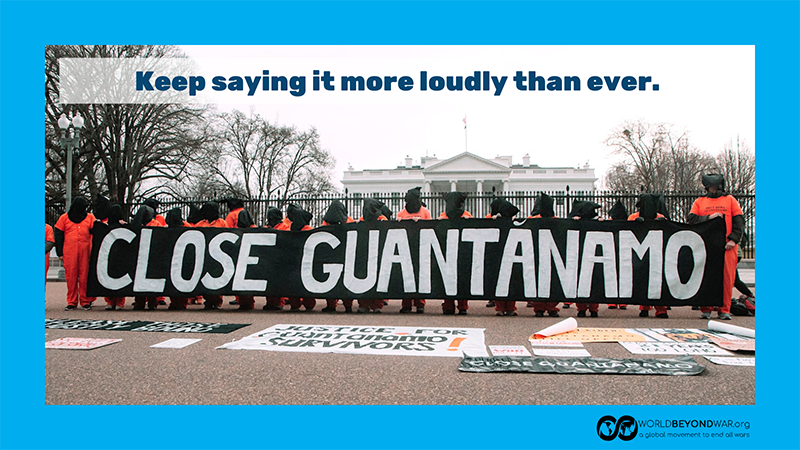 Campaigners calling for the closure of Guantánamo outside the White House on January 11, 2023 (Photo: Maria Oswalt for Witness Against Torture).

I wrote the following article for the “Close Guantánamo” website, which I established in January 2012, on the 10th anniversary of the opening of Guantánamo, with the US attorney Tom Wilner. Please join us — just an email address is required to be counted amongst those opposed to the ongoing existence of Guantánamo, and to receive updates of our activities by email.

On January 11, the 21st anniversary of the opening of the prison at Guantánamo Bay, over 150 rights groups, including the Center for Constitutional Rights, the Center for Victims of Torture, the ACLU, and groups closely associated with Guantánamo activism over the years — Close Guantánamo, Witness Against Torture, and the World Can’t Wait, for example — sent a letter to President Biden urging him to finally bring an end to the monstrous injustice of the prison by closing it once and for all.

I’m pleased that the letter at least attracted a brief flurry of media interest — from Democracy Now! and The Intercept, for example — but I doubt that any of the organizations involved seriously believe that President Biden and his administration will suddenly find that their moral conscience has been awakened by the letter.

What is needed from the Biden administration is hard work and diplomacy, particularly to secure the freedom of the 20 men still held who have been approved for release, but are still languishing at Guantánamo as though they had never even been approved for release in the first place, because their approval for release came solely through administrative reviews, which have no legal weight, and nothing, apparently, can compel the administration to overcome their inertia, and to act with decency to secure the prompt release of these men.

As I explained in a post on the anniversary, addressed to President Biden and the Secretary of State, Antony Blinken:

“This is a truly shameful anniversary, the reasons for which can be laid squarely at your feet. 20 of the 35 men still held have been approved for release, and yet they continue to live in an unforgivable limbo, in which they still have no idea when, if ever, they will be freed.

“You, gentlemen, need to take a proactive role in helping Ambassador Tina Kaidanow, appointed last summer to deal with Guantánamo resettlements in the State Department, to do her job, arranging for the repatriation of the men who can be sent home, and working with the governments of other countries to take in those men who cannot be safely repatriated, or whose repatriation is prohibited through restrictions imposed annually by Republican lawmakers in the National Defense Authorization Act.

“You own Guantánamo now, and approving men for release but then not freeing them, because it requires some hard work and some diplomacy, is both cruel and unacceptable.”

The letter to President Biden urging the closure of Guantánamo

We are a diverse group of non-governmental organizations working, in both the United States and other countries, on issues including international human rights, immigrants’ rights, racial justice, and combatting anti-Muslim discrimination. We write to urge you to prioritize closing the detention facility at Guantánamo Bay, Cuba, and ending indefinite military detention.

Among a broad range of human rights violations perpetrated against predominantly Muslim communities over the last two decades, the Guantánamo detention facility — built on the same military base where the United States unconstitutionally detained Haitian refugees in deplorable conditions in the early 1990s — is the iconic example of the abandonment of the rule of law.

Nearly eight hundred Muslim men and boys were held at Guantánamo after 2002, all but a handful without charge or trial. Thirty-five remain there today, at the astronomical cost of $540 million per year, making Guantánamo the most expensive detention facility in the world. Guantánamo embodies the fact that the United States government has long viewed communities of color — citizens and non-citizens alike — as a security threat, to devastating consequences.

This is not a problem of the past. Guantánamo continues to cause escalating and profound damage to the aging and increasingly ill men still detained indefinitely there, most without charge and none having received a fair trial. It has also devastated their families and communities. The approach Guantánamo exemplifies continues to fuel and justify bigotry, stereotyping, and stigma. Guantánamo entrenches racial divisions and racism more broadly, and risks facilitating additional rights violations.

It is long past time for both a sea change in the United States’ approach to national and human security, and a meaningful reckoning with the full scope of damage that the post-9/11 approach has caused. Closing the Guantánamo detention facility, ending indefinite military detention of those held there, and never again using the military base for unlawful mass detention of any group of people are necessary steps towards those ends. We urge you to act without delay, and in a just manner that considers the harm done to the men who have been detained indefinitely without charge or fair trials for two decades.