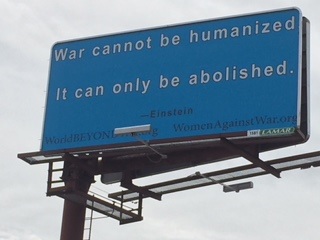 Persistent, consistent and determined, the local grassroots network of women advocating for a sane foreign policy, Women Against War, which includes women from throughout the Capital Region of New York State, stood on the corner of Erie just north of Monroe on Friday, September 7, 2018 with other local peace advocates from Schenectady Neighbors for Peace and Upper Hudson Peace Action for the launch of a second set of area billboards. Groups stood in solidarity around the billboard’s message:

“War Cannot Be Humanized. It Can Only Be Abolished.” – Albert Einstein

In preparation for the International Day of Peace on September 21, the billboard’s message echoes the call to “End Endless War.” It is part of an international effort of the antiwar global network, World BEYOND War.

“Women Against War is sponsoring another set of sky-blue billboards with an anti-war message in the Capital Region during September. One of the things we do as an organization is seek ways to educate ourselves and the public about conflict around the world and the role of U.S. policy in supporting and sustaining it. In order to push our policy makers to make different choices, we need to be aware, well informed, and engaged in public discussion of these issues and our responsibilities.

September felt like an appropriate time for our next message. It is the beginning of the active election season with NYS primaries on September 13 and the final push before Election Day on November 6th. Our Congressional Representatives, both Senators and House Members, must be held accountable for their votes and positions affecting foreign policy, including budget bills. Some of the candidates running are clear about presenting a different position and choice. I am eager to support those who would work for protecting the spirit of the JCPOA (multi-nation agreement referred to as “Iran Nuclear Agreement” from which President Trump has withdrawn our nation), work to ease the humanitarian crisis in Yemen by first stopping our military and financial support of Saudi Arabia, work for easing of tensions and denuclearization on the Korean Peninsula, and work to re-engage the U.S. in global climate efforts and goals that are part of the Paris Agreement following President Trump’s withdrawal of the U.S. Who we choose in these elections can change the course of our nation’s involvement in conflicts around the world. Election season is a time to vigorously exercise our informed democratic participation.

September is also back-to-school time when families turn from the season of camp and vacations to one of being more serious and focused. It is a time when many are thinking about their future and how the choices they make will affect that future. The quote we have chosen on our billboard is by Albert Einstein. Who better represents curiosity, a brilliant mind, and the dilemma of the risks posed by splitting the atom vs the urgency to make an atomic bomb before the Nazi scientists did. This famous physicist was an avowed pacifist and worked to warn the world of the dangers of nuclear proliferation throughout the rest of his life.

The Costs of War Project at Brown University’s Watson Institute for International and Public Affairs has produced a report and a map showing that Washington’s war on terror has affected, in some manner, 76 countries. The U.S. government is supporting perpetual global war. We say “No more! End Endless War!”

This billboard message is also timed to support the Grannies for Peace annual vigil honoring the International Day of Peace on September 21. Grannies’ theme this year is End Endless War.

Women Against War learned of the billboard project being promoted by World BEYOND War. World BEYOND War designed various billboards with anti-war messages that local organizations could sponsor to be displayed in their own communities. During May, we had two with the same message: “3% of U.S. military spending could end starvation on earth.” We feel the awareness and discussion that resulted from the hundreds who saw that message are vital to our community and democracy. We need to push our elected officials to make different choices. President Dwight Eisenhower warned the nation in 1961 of the growing influence of the military-industrial complex and the need for a knowledgeable and alert citizenry to guard against the rise of misplaced power. It is time to choose peace and break the cycle that has pulled us into a permanent war economy with nearly 50% of each tax dollar going to current or past military.”