(This is section 56 of the World Beyond War white paper A Global Security System: An Alternative to War. Continue to preceding | following section.)

1899: The creation of a new profession . . . “peace worker”
(Please retweet this message, and support all of World Beyond War’s social media campaigns.)

Surprisingly, if one looks at the last 200 years of history, one sees not only the industrialization of warfare, but also a powerful trend toward a peace system and the development of a culture of peace, a veritable revolution. Beginning with the emergence for the first time in history of citizen based organizations dedicated to getting rid of war in the early 19th century, some 28 trends are clearly visible leading toward a developing global peace system. These include: the emergence for the first time of international courts (starting with the International Court of Justice in 1899); of international parliamentary institutions to control war (the League in 1919 and the UN in 1946); the invention of international peacekeeping forces under the auspices of the UN (Blue Helmets) and other international organizations such as the African Union, deployed in dozens of conflicts around the globe for over 50 years; the invention of nonviolent struggle as a substitute for war, beginning with Gandhi, carried on by King, perfected in the struggles to overthrow the East European Communist Empire, Marcos in the Philippines, and Mubarak in Egypt and elsewhere (even used successfully against the Nazis); the invention of new techniques of conflict resolution known as non-adversarial bargaining, mutual gains bargaining, or win-win; the development of peace research and peace education including the rapid spread of peace research institutions and projects and peace education in hundreds of colleges and universities around the world; the peace conference movement, e.g., the Wisconsin Institute annual Student Conference, annual Fall Conference, the Peace and Justice Studies Association annual conference, the International Peace Research Association biennial conference, Pugwash annual peace conference, and many others. In addition to these developments there is now a large body of peace literature – hundreds of books, journals, and thousands of articles – and the spread of democracy (it is a fact that democracies tend not to attack one another); the development of large regions of stable peace, especially in Scandinavia, U.S./Canada/Mexico, South America, and now Western Europe—where future war is either unthinkable or highly unlikely; the decline of racism and apartheid regimes and the end of political colonialism. We are, in fact, witnessing the end of empire. Empire is becoming an impossibility due to asymmetric warfare, nonviolent resistance, and astronomical costs that bankrupt the imperial state. 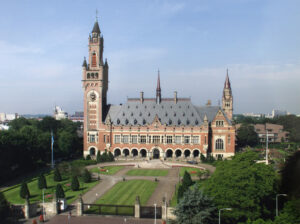 The Peace Palace at the Hague is emblematic of the global expansion of the movement for international peace at the turn of the 20th century. (Source: wikicommons)

More parts of this peace revolution include the erosion of national sovereignty: nation states can no longer keep out immigrants, ideas, economic trends, disease organisms, intercontinental ballistic missiles, information, etc. Further advances include the development of the worldwide women’s movement–education and rights for women have been spreading rapidly in the 20th century and, with notable exceptions, women tend to be more concerned with the well-being of families and the earth than are men. Educating girls is the single most important thing we can do to ensure sound economic development. Further components of the revolution are the rise of the global environmental sustainability movement aimed at slowing and ending excessive consumption of resources and oil that create shortages, poverty, and pollution and exacerbate conflicts; the spread of peace-oriented forms of religion (the Christianity of Thomas Merton and Jim Wallis, the Episcopal Peace Fellowship, the Buddhism of the Dalai Lama, the Jewish Peace Fellowship, the Muslim Peace Fellowship and the Muslim Voice for Peace); and the rise of international civil society from a handful of INGOs in 1900 to tens of thousands today, creating a new, nongovernmental, citizen-based world system of communication and interaction for peace, justice, environmental preservation, sustainable economic development, human rights, disease control, literacy, and clean water; the rapid growth in the 20th century of an international law regime controlling war, including the Geneva Conventions, the treaties banning land mines and the use of child soldiers, atmospheric testing of nuclear weapons, placing nuclear weapons on the sea bed, etc.; the rise of the human rights movement, unprecedented before 1948 (Universal Declaration of Human Rights), once totally ignored, now an international norm whose violation is an outrage in most countries and brings immediate response from states and NGOs.

Nor is this all. The peace revolution includes the rise of the global conference movement such as the Earth Summit in 1992 in Rio, attended by 100 heads of state, 10,000 journalists, and 30,000 citizens. Since then global conferences on economic development, women, peace, global warming, and other topics have been held, creating a new forum for people from all over the world to come together to confront problems and create cooperative solutions; the further evolution of a system of diplomacy with well-established norms of diplomatic immunity, 3rd party good offices, permanent missions—all designed to allow states to communicate even in conflict situations; and the development of global interactive communication via the World Wide Web and cell phones means that ideas about democracy, peace, environment, and human rights spread almost instantly. The peace revolution also includes the appearance of peace journalism as writers and editors have become more thoughtful and critical of war propaganda and more attuned to the sufferings that war causes. Perhaps most important are shifting attitudes about war, a sharp decline in this century of the old attitude that war is a glorious and noble enterprise. At best, people think it is a dirty, violent necessity. A special part of this new story is spreading information about the record of successful nonviolent methods of peace and justice making.note4 The emergence of this embryonic global peace system is part of the larger development of a culture of peace.

Wherever people gather for selfless ends, there is vast augmentation of their individual capacities. Something wonderful, something momentous happens. An irresistible force begins to move, which, though we may not see it, is going to change our world.

See other posts related to “Creating a Culture of Peace”

Notes:
4. These trends are presented in depth in the study guide “The Evolution of a Global Peace System”and the short documentary provided by the War Prevention Initiative. (return to main article)