Just like the movie Three Billboards Outside Ebbing, Missouri challenged public officials to solve a murder, two new billboards outside Albany are challenging Washington to change the way it uses our valuable tax dollars. 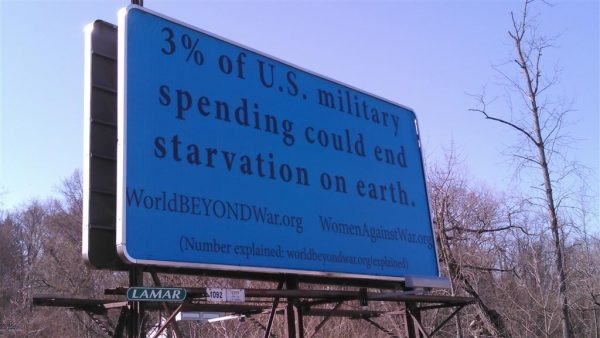 3% of U.S. Military Spending Could End Starvation on Earth is the message on 2 Albany area billboards for the month of May – put up by Women Against War, who point out that ending the desperation of starving families could do much more for preserving peace than increasing the size of US forces, already “larger than the next 8 countries’ combined”.

The billboards in our area are part of the national Billboard Project, coordinated by World Beyond War.

World Beyond War explains how the $30 billion which could end world hunger (according to data from the UN’s Food and Agricultural Organization) represents such a small percentage of the $1 trillion we taxpayers are now spending on the military.

The problem of global hunger is huge. Amy Lieberman reports on Devex:  “Protracted conflicts and climate shocks have led to a record breaking 124 million people, across 51 countries, now facing food insecurity or worse conditions”, with trends

worsening in 2018, according to the Food Security Information Network’s annual report on food crises.

We know that US military action and President Trump’s resistance to action against climate change are both just adding to this global food crisis. There is no better example than Yemen where the US-assisted Saudi bombings and naval embargo, on top of serious drought, have resulted in a humanitarian catastrophe, with aid organizations prevented from delivering food and medical assistance. According to UNICEF, nearly

400,000 Yemeni children “are severely malnourished and fighting for their lives.” Save the Children reports “130 children die every day in Yemen from extreme hunger and disease–one child every 18 minutes.”

We also know the problem of hunger is not just an issue in developing countries around the world.   Eric Alterman reports in The Nation that 41 million Americans are currently food insecure, with President Trump’s budget proposal calling for roughly 25% cuts in the key federal hunger program, SNAP (Supplemental Nutrition Assistance Program), over the next decade.

According to the Annie E. Casey Foundation, 14 million US children go to bed — and to school — hungry. “These children, who represent 19% of all kids nationwide, live in a food insecure household, which means that their families lack the necessary resources to buy food for everyone in their home.”

Women Against War is holding a Launch Vigil at the Central Ave billboard this Thursday, May 3rd, from 10:30-11:30 AM. This vigil is part of an international campaign, The Global Days of Action on Military Spending, calling on governments everywhere to use re-purpose their military budgets to meet human needs.

Please join us to call for putting the Pentagon on a diet — so that there is funding available for food programs like SNAP at home and humanitarian assistance and development aid globally. No one should have to go to bed hungry. It does not make a safer or more humane world.