TRUMP NOT WELCOME IN FRANCE! 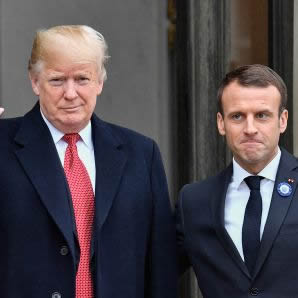 Macron Invites Trump and Netanyahu to a “Peace Forum”

French President Emmanuel Macron invited Donald Trump and 60 heads of State to attend a “Peace Forum” in Paris on November 11-13. It will be preceded one day earlier by a ceremony at the Place des Invalides to pay tribute to the millions of people who died in the First World War or, stated more accurately, the first great inter-imperialist bloodbath. Special tribute will be paid to the generals who led their soldiers to slaughter from 1914 to 1918, including Maréchal Pétain, who Macron described as a “great soldier” despite his subsequent “fateful choices” — a reference to Pétain’s close collaboration with Hitler and the Nazis during World War II.

“Who are they kidding?” read a statement by Jeunesse Révolution (Revolution Youth). It continued:

“Trump is the man who ordered all NATO member countries to increase the war budget to 2% of GDP, or about 40 billion euros for France. Of course, Emmanuel Macron, our king without a crown, did not object.

“And yet … With 40 billion euros, governments could have built hospitals, schools, and childcare centers, and created living-wage jobs for young people. But no, no, no. Workers are being asked to tighten their belts more and more for wars that are not their wars; they are the capitalists’ wars. Hence the attacks throughout France on retirement pensions, the dismantling of the national Single-Payer healthcare system, and the destruction of public education, while the capitalist class continues to reap more and more profits.”

Jeunesse Révolution issued a united-front “Call to Demonstrate on November 11 Against Trump’s Presence in Paris.” Hundreds and hundreds of working class youth endorsed this call and are building this demonstration. But none of the main organizations to which the call was addressed [see initial call below] responded to the call to mobilize in the broadest unity against the warmakers.

Toward the end of October, the Democratic Independent Workers Party of France (POID) and Jeunesse Révolution learned that a number of “collectives” had issued a call to rally on November 11 at the Place de la République. Their call was not endorsable, but the POID and Jeunesse Révolution were considering participating in that gathering separately under their own banners and with their own demands.

That thinking changed, however, on November 6, when the POID and Jeunesse Révolution learned that a so-called “Coordinating Committee of the Syrian Revolution in Paris” had been invited to join the rally on November 11 at the Place de la République.

The “Coordinating Committee of the Syrian Revolution in Paris” had stated that they would be joining the rally to call upon “Member States of the United Nations Security Council to assume their responsibility for the implementation of the Security Council’s resolutions on Syria, starting with the establishment of a Transitional Governing Body.”

The POID and Jeunesse Révolution explained that they could not demonstrate against Trump and Macron’s policy of war and interference … alongside supporters of Trump and Macron’s war and interference in Syria. The call for a “Transitional Governing Body” is exactly what Trump and Macron are calling for; it is what they are seeking to impose on Syria through their military intervention — an intervention that since 2011 has driven 12 million Syrians from their homes and killed hundreds of thousands of people.

Under these conditions, the POID and Jeunesse Révolution explained that they had no choice but to call their own separate demonstration at Place Gambetta at 2:30 pm on Sunday, November 11 with the following slogans:

Joint Call by the POID and Jeunesse Révolution:

On November 11 in Paris, Macron invites Trump to a “Forum for Peace”!

A “Peace Forum” with Trump?

– Trump, who just ordered the U.S. Army to shoot migrants at the Mexican border!

– Trump, who is waging war in Afghanistan, Iraq, Syria… and is now threatening Iran, Venezuela, China!

– Trump, who arms and supports Netanyahu in his war against the Palestinian people!

And Macron, who is he kidding?

– He, who has just increased the military budget by 1.7 billion euros in 2019 for the wars in Mali, Central Africa, Afghanistan, Syria …

– He, who, with his counter-reforms of pensions, among others, has launched the war “at home” against workers and young people in France!

– He, who, together with the European Union, is hunting down migrants….

– He, who delivers the weapons with which the King of Saudi Arabia has been killing the people of Yemen for four years!

– He, who will pay tribute on November 10, at the Place des Invalides, to Maréchal Pétain, whom he described as a “great soldier” despite his subsequent “fatal choices”!

All out Sunday, November 11 to the Mass Rally

Initial Call by Jeunesse Révolution (Revolution Youth) “for a demonstration against the presence of Trump on November 10-11, 2018 in Paris” (excerpts)

Macron has invited Trump to attend a military parade in Paris on November 10. …

Trump the racist, who separates children from their immigrant parents who are fleeing poverty in Mexico and Central America. Trump who hunts down immigrants, just as Macron and the European Union are turning away in our country refugees fleeing poverty and war, refugees who were able to survive the crossing of the Mediterranean ….

Trump is about war.

Trump is about the bombing and the occupation in Afghanistan, Iraq, Syria, Haiti — just as occurred years before under Clinton, Bush, and Obama…. Trump is about increased threats of intervention against Iran, Venezuela, Korea, and China. Trump is about the increase in the military budgets of all NATO countries … which Macron immediately accepted for France ….

Trump is the billionaire, the capitalist who — like Obama and Clinton before him, and like Macron in France — is implementing policies in favor of the bosses, bankers and capitalists, while billions of human beings suffer from hunger, unemployment and poverty. Trump is about the privatization of universities to prevent young people from studying, as in France with Parcoursup, which wants to prevent us from enrolling in the course of study of our choice … !

Trump was invited by Macron on November 10-11 for the 100th anniversary of the 1914-1918 war…. Twenty million dead, many of them our own age, of all nationalities …. This war was not theirs war, just as the Trump and Macron wars are not our wars. A hundred years ago, against the capitalist butchery, there was the October 1917 Revolution in Russia. Today as in the past, against war and exploitation, there is only one solution: Revolution!

Jeunesse Révolution calls upon all youth organizations that claim to be committed to peace, social justice and international solidarity, without exception (UNEF, UNL, MJS, Jeunes Communistes, Jeunes Insoumis, etc.): On November 10 or 11, let us create the conditions for a demonstration of tens of thousands of young people in Paris, around the slogn of “Trump Not Welcome!” This action could be convened by all the organizations in the broadest possible unity!

Macron: Out now! Open the borders to all refugees! Stop all imperialist wars! Right of return of Palestinian refugees! A real diploma, a real job, a real salary!