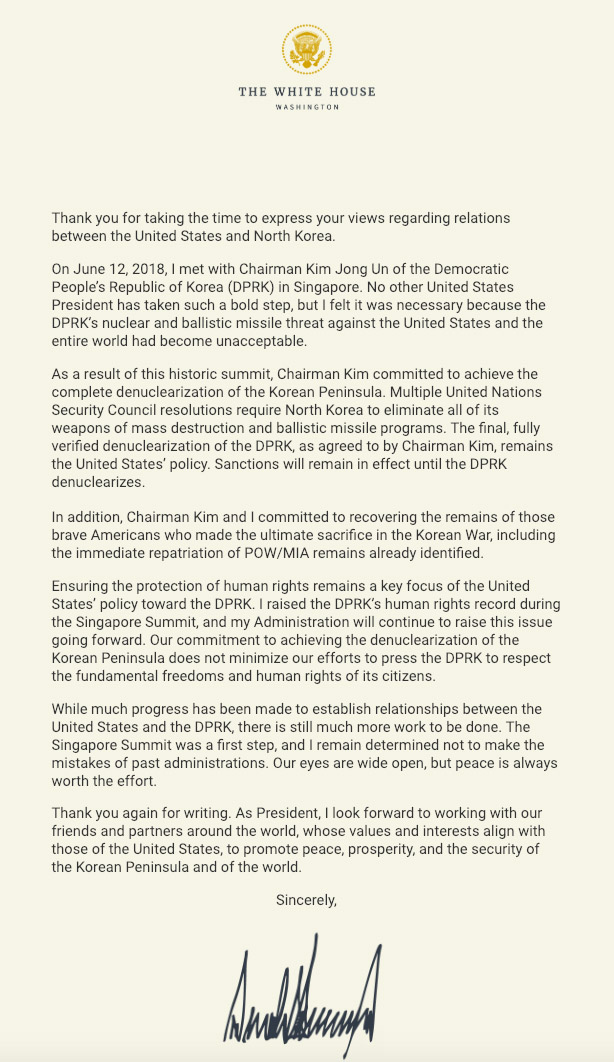 Today I received a form email letter from President Trump responding to one of many emails I have sent the White House on the need for peace on the Korean peninsula.

I sent the White House response to the Korean Peace Network list-serve and immediately got back some very important comments.

Phyllis Bennis of the Institute for Policy Studies asked: “is there any significance to the fact that the programmatic paragraph starts with “denuclearization of THE KOREAN PENINSULA”??  Even if the rest of the paragraph speaks only of the usual US demands re DPRK denuclearization, starting with the peninsula as a whole seems slightly interesting …”

“As a result of this historic summit, Chairman Kim committed to achieve the complete denuclearization of the Korean Peninsula. Multiple United Nations Security Council resolutions require North Korea to eliminate all of its weapons of mass destruction and ballistic missile programs. The final, fully verified denuclearization of the DPRK, as agreed to by Chairman Kim, remains the United States’ policy. Sanctions will remain in effect until the DPRK denuclearizes.”

Yes, it is quite significant. The DPRK has insisted since the beginning of these talks that it wants the US to end its “hostile policy,” which to them includes the massive US nuclear force in East Asia, primarily on US ships and planes based in Japan, Okinawa and Guam. Those weapons are aimed at them too. I was told that the wording you mentioned – “the Korean peninsula” – was included at the DPRK’s insistence to reflect its interest in removing the US nuclear threat. It’s just never talked about here. I reported on this in one piece I did for The Nation last July.

“There are no solid agreements to breach at this point,” a diplomatic troubleshooter in Seoul who meets regularly with US and Korean officials told The Nation. “We haven’t even gotten to the stage of North Korea making a declaration” of its weapons or its plutonium and uranium facilities. He spoke on the condition of anonymity because of the sensitivity of his position.

The troubleshooter, whose contacts in Korea go back many years, said that the US and North Korean intelligence officials who have been handling bilateral talks since they began in March will soon be replaced by diplomats, including Pompeo and North Korean Foreign Minister Ri Yong Ho. They will seek to carry out the joint pledge by both sides in Singapore to “work toward complete denuclearization of the Korean Peninsula.” To Kim Jong-un, he said, that means a verification scheme that also includes South Korea and the many US bases there.

“There are no obligations until there’s an agreement in place covering nuclear material on both sides of the DMZ,” he told me over lunch at a Seoul hotel. “Why should they agree until it covers both halves of the Korean Peninsula?” He pointed out that, while then-President George H.W. Bush withdrew US-controlled tactical nuclear weapons from the South in 1991, “North Korea never verified it.”

The North might also push for any agreement to include the US nuclear umbrella over the South, including US nuclear-armed ships and warplanes in the Northeast Asia region. “Let’s have the agenda, and then decide who’s violating it or not,” he said.

But meanwhile, the status quo for both the North (with its small nuclear arsenal and powerful ICBMs) and the United States (with its 30,000 troops in South Korea and a massive, nuclear-armed military force in the Asia region) remains in play until both sides reach an agreement on a peace and disarmament process.

Mr. Shorrock ends with: “But the Dems will probably see in it as just another sign of Trump “being played” by Kim.

Still, it’s important for Americans to know this process is not just a one-way street, that North Korea has security concerns of its own that it hopes to mitigate.”

Denuclearization of the Korean Peninsula by both North Korea and the United States should move the peace process along with great speed.  Let’s hope that is what President Trump means for the Viet Nam summit in two weeks.

Ann Wright served 29 years in the US Army/Army Reserves and retired as a Colonel.  She was a US diplomat for 16 years and served in US Embassies in Nicaragua, Grenada, Somalia, Uzbekistan, Kyrgyzstan, Sierra Leone, Micronesia, Afghanistan and Mongolia.  She resigned from the US government in March 2003 in opposition to the US war on Iraq.  She visited North Korea and South Korea in 2015 as a member of the 2015 Women Cross DMZ.