Why I like Max Ernst so much is that he was not afraid to be unpopular in various ways. I mean both as an artist and as a human. Although his dealings with women showed signs of a pronounced, if not clinical, autistic or narcissist strain, he “got it” when it came to those who want to rein the artist into pick column A or column B.

“You have to pick one!” orders conventional society. “Pick now! You must think like the major groups of people.”

Ernst grew up in an autocratic family with a stern patriarch.  In his biography, Max Ernst: Inside the Sight, Werner Hoffmann asserts that “His father Philipp was a teacher of the deaf and an amateur painter, a devout Christian and a strict disciplinarian. He inspired in Max a penchant for defying authority, while his interest in painting and sketching in nature influenced Max to take up painting.” Indeed, Ernst showed over and over how he felt about authoritarian regimes and persons. Besides that, Ernst was a visual wizard who knew how to make concepts visceral.  His painting Angel of the Hearth and Home portrays these clichéd phrases ironically to show a monster made up of various national and battle flags. Flags are something any simpleton can rally around and stomp through a landscape. 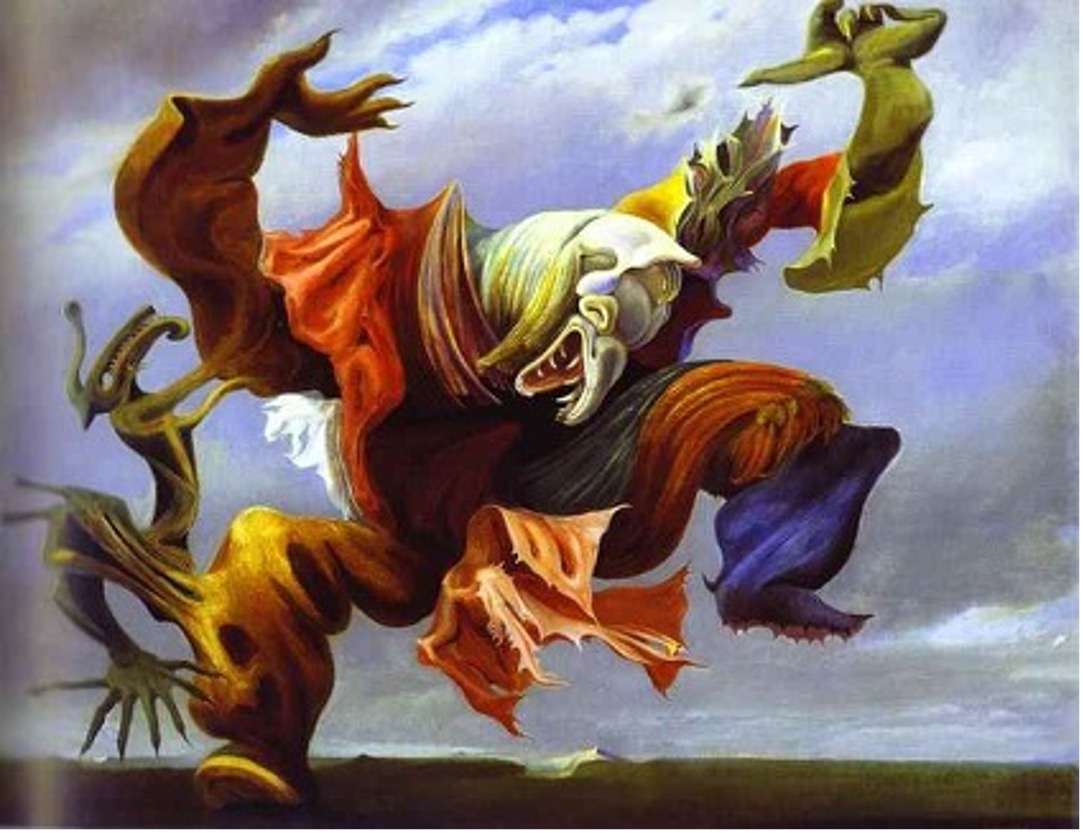 The Ernst painting dates from 1937 when Ernst was fleeing Nazi oppression  to France, only to be labelled an “undesirable alien” and interned in France, then rescued by his lover Peggy Guggenheim from immanent arrest by the Gestapo. Ernst made no one-sided reference above to either German fascism or Soviet-style Communism.  He is showing how traditional values—angels of the hearth and home—may be rhetorically perverted to be rallying cries for genocidal and fratricidal violence. It is hard to say whether the little goblin who is hanging onto one of the arms of the “angel” is trying to restrain it. That flimsy figure may be some kind of “too little effort” symbol, showing its inability to restrain the violence in human society.

Ernst has more lyrical sides and his fantasias on mountain scenery are equally haunting, if more subdued.  When the stressful world became too much, Ernst would call on a familiar cast of fantastic beings such as Lop Lop, the bird. There’s a whole back story about the bird that involves how Ernst’s pet bird died just as his sister was being born. But mainly the bird was a good character in Ernst’s work, an alter ego, as here in Nature at Dawn, in which Lop Lop is peaking from the shadowy foliage. 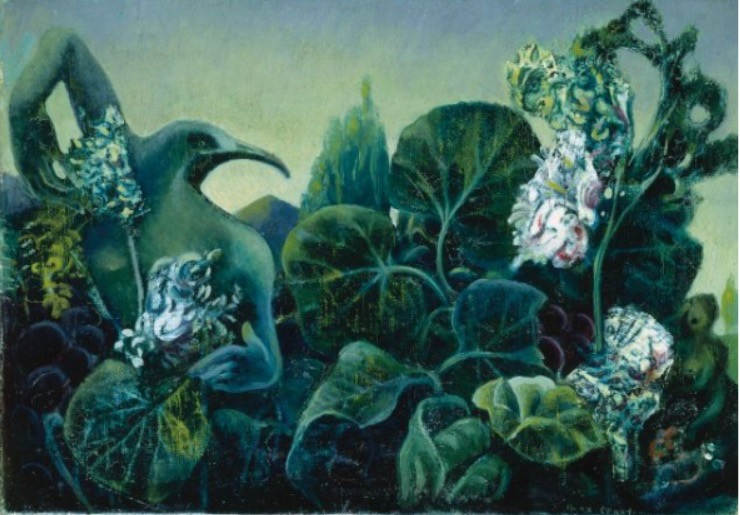 An article in the  May 4th 2019 DailyArt online journal, Jon Kelly opines that Max Ernst’s “Lop Lop; a feathery companion deemed ‘King of the Birds’. With suggestions of childish wit, Lop Lop serves as an interloper between the realms of the unconscious and the awakening mind. He first appears in a series of painted collages in the late 1920’s ‘presenting’ framed pictures to the viewer like an obsessive collector of found objects. He embodies the specter of Ernst as an artist, a gatekeeper straddling realities, a primitive icon bearing the secrets to visionary freedom.”

In another painting called Lop Lop Introduces Lop Lop, Ernst shows his consciousness to himself. He found a way to cope in the worst of times and circumstances using his creative imagination. As the grotesque forces of power and wealth seem to converge these days, I created two paintings in homage to Max Ernst, the Planet of duo. When copying them, I noticed that try as I might to be grim and behaving like the voice of an oracle, little gargoyles started to play around and frolic.  Maybe this was more like Hieronymus Bosch, who also was a sort of inspiration for Ernst. Bosch’s sinners and demons at times seem to be having a jolly enough time. In my painting, one comedic gargoyle whom I call “Gargie,” is taking it all in, giving a droll look at the viewer. Where did he come from amid all the violence and gloom? Who knows? 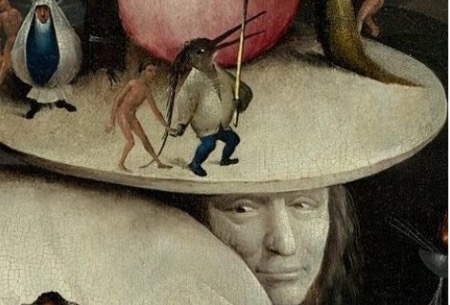 The little gargoyle just looked out from the rest with a kind of Charlie Chaplin, “Who, me? Aren’t I innocent and sweet?”

As power and money flow into fewer and fewer hands and as the press always cover one side’s casualties and are (how cozy) “embedded” with a side in the wars today, it will be easier and easier to believe that God is on our side. When we destroy villages to save them from some hated other belief about history, that is good.

Bosch knew these ideas and so did Max Ernst. Both artists knew where this kind of thinking led. It is as old as the hills and new as the newest hypersonic missile. 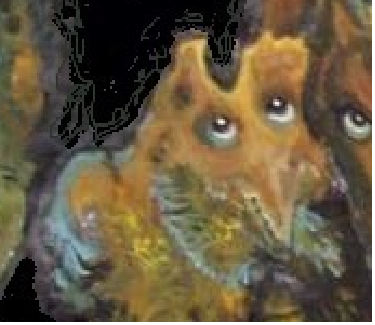 BELOW: The two Planet of—paintings that owe a bit to Max 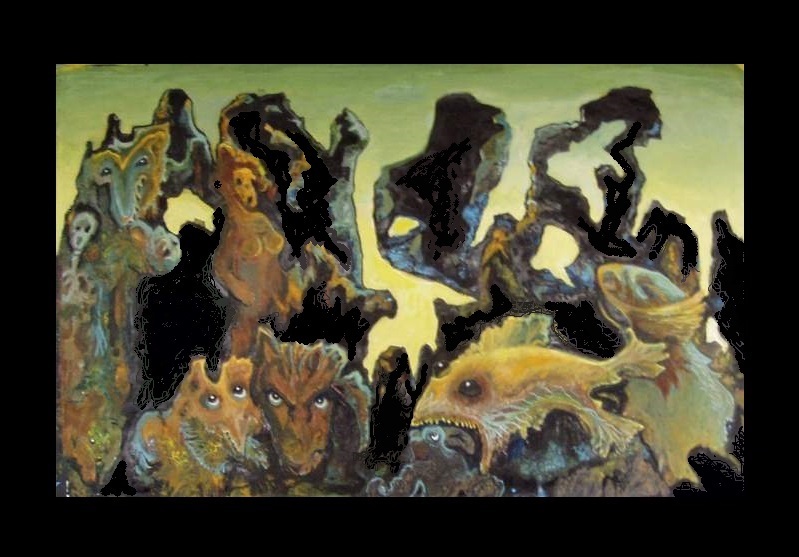 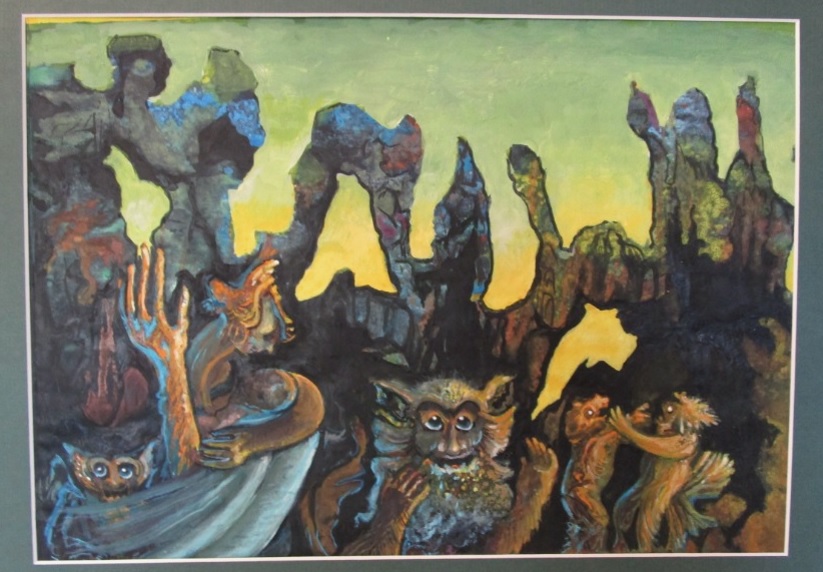