What if people around the world devoted the month of November to #NOwar?

In the US and many other countries, November 11 is remembered as the date of the armistice ending WWI.

What if people everywhere re-claimed that date for its original meaning – the determination to “end all wars”?

We’ll be adding new images daily here — some based on your social media contributions! — and linking them to key sections of our World Beyond War call to action,  A Global Security System: An Alternative to War.

Of course, please be sure to sign the World Beyond War Declaration of Peace, and receive regular updates.

(More on the main World Beyond War social media page!)

An international Week of Action Against the Militarisation of Youth will be held for the second time November 14-20 – sponsored by War Resisters’ International:

For November 11 — Veterans Day/Armistice Day – we featured this article from Veterans for Peace executive director Michael McPhearson (and it was also carried in Truthout and Common Dreams):

Veterans for Peace organized events across the US – see this page to find a group near you!

Pace e Bene/Campaign Nonviolence has encouraged its supporters worldwide to join this campaign.

Thanks for your support, Father John Dear and everyone at Pace e Bene/Campaign Nonviolence! 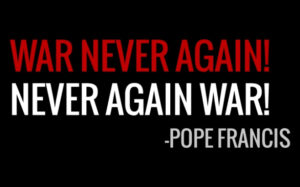 Here are seven ways to say #NOwar throughout the month of November – provided by Campaign Nonviolence.

ITALY: On November 3, European activists will protest against NATO exercises in Teulada, Sardinia:

In Okinawa, protests against the US military presence intensify:

MALAYSIA: From World Future TV in Malaysia: Nov 11 is world’s no war day

How will you be  saying #NOwar in November?