Say It Aint So, Joe!

World BEYOND War was present at COP26 and the parallel People’s Summit this year in Glasgow Scotland from November 3rd to November 11th.

Now that the lip-flapping of COP26 is over and the energy of the People’s Summit has, hopefully, re-energized commitment to actually DO something about slowing down rapid climate changes, here are some observations and opinions. 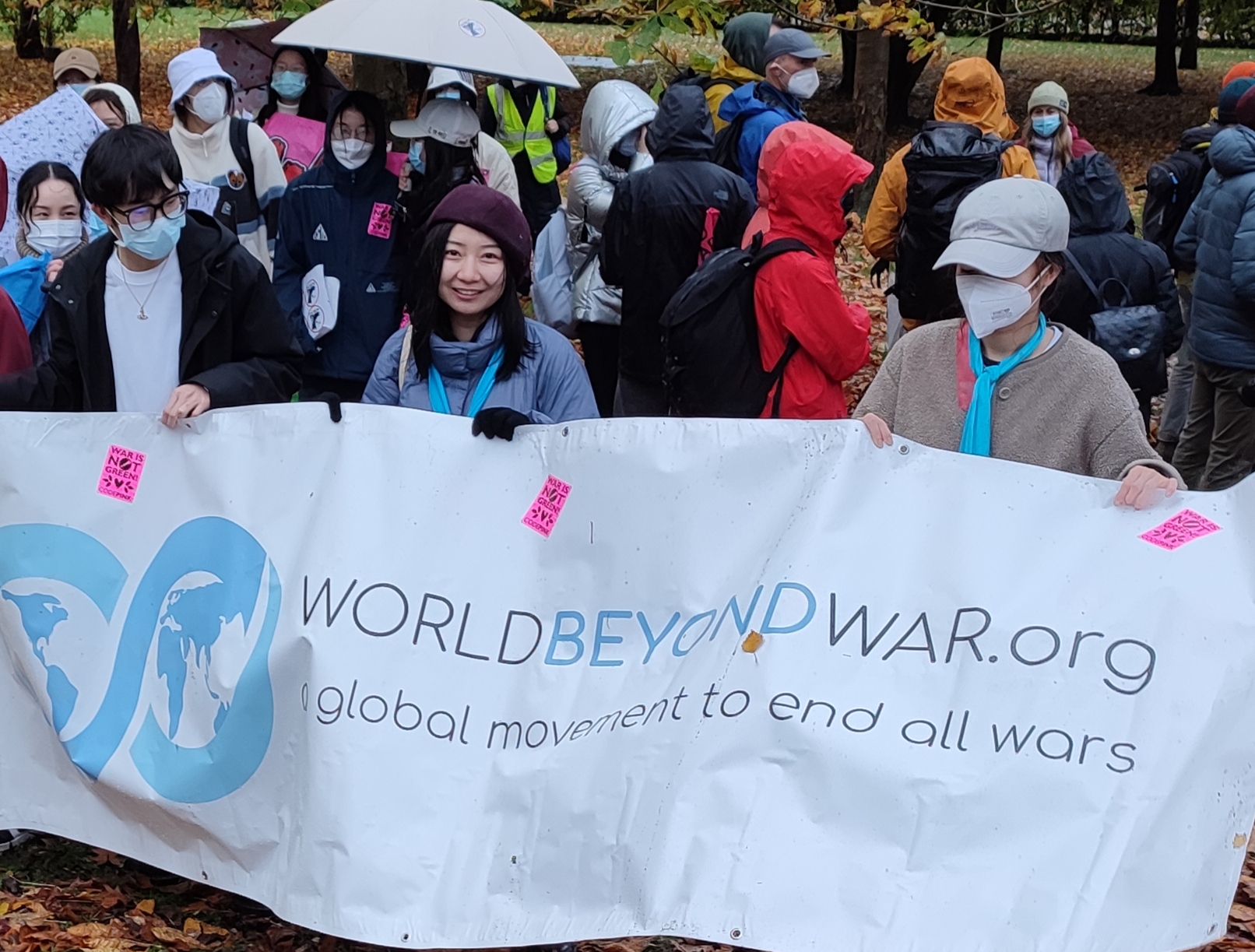 University students from China and Hong Kong marched side by side with us, supporting World BEYOND War’s and CODE PINK’s calls for demanding that militaries around the world be required by law to report their use of fossil fuel and the resultant greenhouse gas emissions — and that those emissions be included in totals to be reduced. Thanks to U.S. political pressure at climate treaty agreement meetings in the past, military fossil fuel use reports are not required, nor voluntarily offered by the vast majority of governments.

International cooperation at the grassroots level is what will bring about climate regulation change. Specifically, the photos above reflect the desire to work together by people from the U.S. and China even though the U.S. government condemns and demonizes China with frenzied, panicked, misleading, and calculated propaganda intended to sway the U.S. public toward fearing China and its people rather than working together with them to create a safer and more cooperative global community. 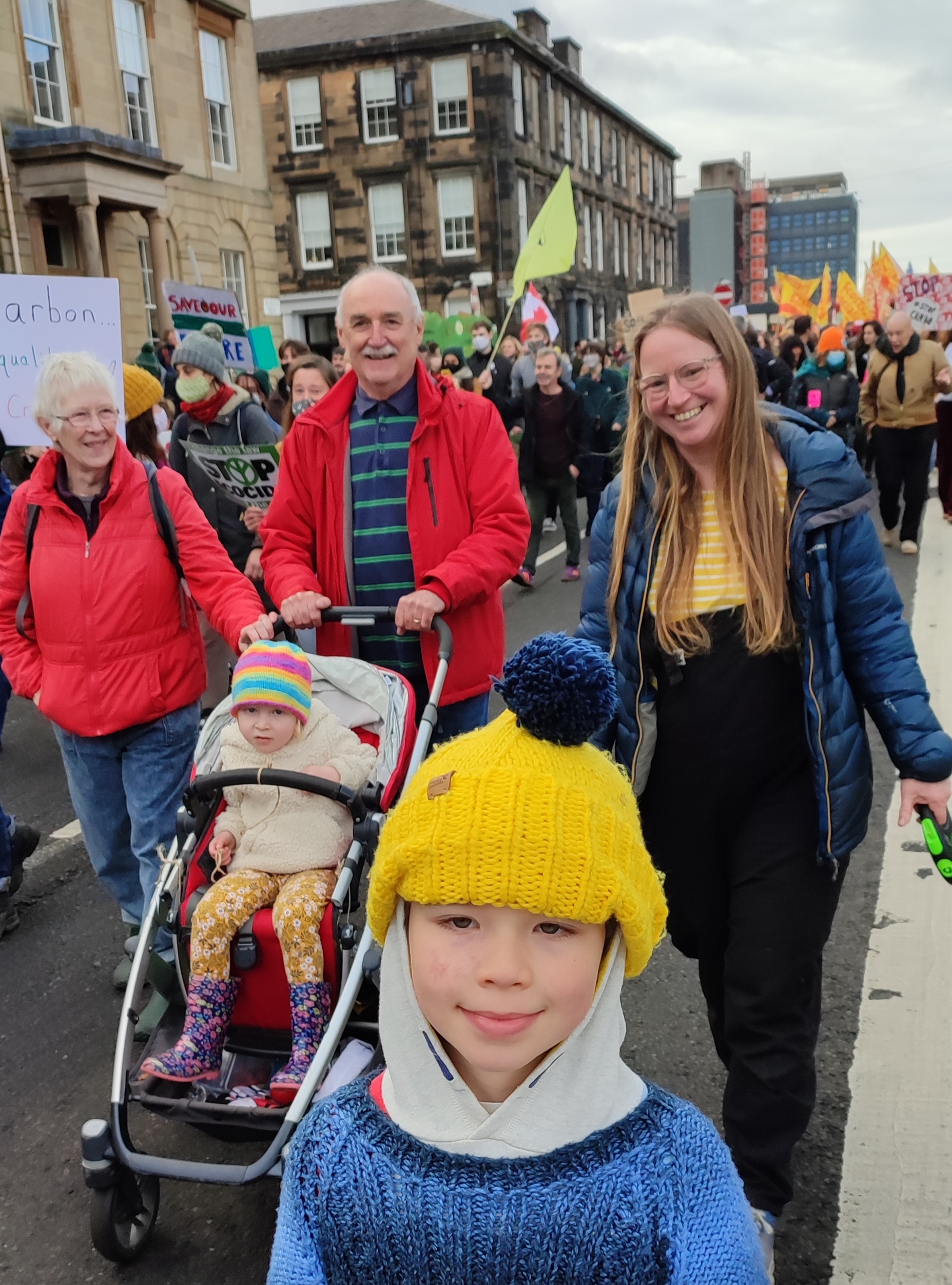 A truly inter-generational cooperative effort could be seen and heard at the People’s Summit. From the Youth March of over 25,000 participants on November 5th, to the main march of over 100,000 people on the 6th, all ages were walking and working together for the common cause of climate justice while U.S. wars and war preparations, plodded forward unchecked, continuously adding to their unregulated destruction of the environment via greenhouse gas emissions. The people in the streets were clearly directing their energies toward the closed doors and many closed minds of the COP26 meetings, asking for concrete actions to slow current climate change conditions. We appear to be educating ourselves along the way toward reclaiming our ability to work for the benefit of the majority rather than the few. The few have not yet caught on.

(3) The World BEYOND War Petition to COP26 asking to require all governments around the world to be legally bound to include military pollution in totals that must be reduced.

At COP26, while the United States hid behind its continued tiresome push seeking international domination by maligning both Russia and China for not attending the gathering, Joe B. failed to acknowledge that the U.S. military is the number one industrial polluter on planet Earth, failed to address the immeasurable damage that military emissions cause the climate, and failed to offer any sort of global leadership example at all. What a waste of time!

In the face of such inaction, there was a quiet roar of dedicated Indigenous peace workers, uneasy, youthful recipients of a hand-me-down capitalistically charred climate, and nearly 200,000 marchers and peaceful protesters calling to world powers to step up and actually begin implementing plans for climate reparations rather than trying to squeeze profits out of climate threats and damage.

The following organizations worked well together to plan and orchestrate the dissemination of information and inspiration to the People’s Summit regarding the topic of Challenging the Military Carbon Bootprint:

I apologize to those organizations that I’ve left out. I simply can’t remember them.

This information was delivered via an outdoor presentation on Buchanan Steps in front of the Glasgow Royal Concert Hall in downtown Glasgow, and an indoor panel presentation at Renfield Center Church Hall, also downtown.

Glimpses were offered into the significant unreported and under-reported military impacts on the surface, atmosphere, and living inhabitants of the Earth, all of which are impacted in a negative manner while militaries continue to grow and pollute more than any other industry in the world. They do so without having to report any of their damage relating to greenhouse emissions. The majority of the damage is being done by the United States government and the U.S. military.

At COP26 there was no indication from U.S. Joe that he would do anything of significance to decrease the military impact on climate change. If anything is done about it, it will be thanks to outside pressures whose major concerns are not world domination and increased profits, but rather climate and social justice.

It saddens me that Joe does not step up to the plate and take a leadership role in healing climate damages that have in great part been created by the country and government he represents. It brings to mind a story about incredulousness and disappointment.

In 1919, some members of a baseball team in the United States cheated in the World Series Championship game. One of the players on the team that cheated was named Joe and was a favorite of the fans. It’s reported that after the story broke someone approached him on the street and pleaded, “Say it ain’t so, Joe! Say it ain’t so!”

One hundred years later in 2019 in a public statement on a university campus, an ex-director of the United States CIA laughingly proclaimed with a smile on his face to students that, “We lied, we cheated, we stole. We had entire training courses.” They are still cheating, and the U.S. government appears to lead by example . . . at least in this category.

It appears that despite the status of the #1 industrial polluter in the world, the U.S. military has no intention to take responsibility for it, nor to decrease military activity to slow down climate change. Rather, it has publicly outlined some of its strategy to gear up activity and spending which will further add to the cascading climate change challenges it already has a leadership role in creating.

To the commander in chief (purposefully NOT capitalized for lack of respect) of the United States military I plead, “Say it ain’t so, Joe! Say it ain’t so!”