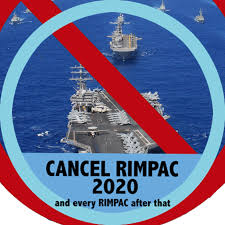 The Pacific Peace Network (PPN) has called for the cancellation of the Rimpac ‘war game’ exercises in Hawai’ian waters scheduled to start this week.

The PPN is a coalition of peace organisations from around the Pacific Ocean including Australia, Aotearoa New Zealand, Hawai’i, Guam/Guahan and the Philippines which was set up after a conference in Darwin last year.

Rimpac is the world’s largest maritime exercise, run by the US Navy and has been attended by up to 26 countries biennially since 1971.

This year Mexico, the United Kingdom, the Netherlands, Chile and Israel have pulled out due to concerns about Covid, and the event has been downsized and delayed in the wake of the global pandemic, which is particularly dangerous for those in navy ships, and has already been reported as affecting thousands of sailors.

The Guardian newspaper reported last week that Hawaii’s case numbers soared from less than 1,000 in early July to nearly 4,000 in the first half of August, with the US revealing that military personnel and their families were making up 7% of the infections.

Meanwhile world leaders such as United Nations Secretary General Antonio Guterres and Pope Francis have also been calling for the de-escalation of military build up during Covid.

While Rimpac is being framed with the intention of protecting vital shipping routes and guaranteeing freedom of navigation through international waters, Mrs Remmerswaal says an emphasis on diplomatic protections, maritime treaties and international laws would be more conducive to true peace and freedom.

“We need to rethink our views on security away from outdated and expensive military investment towards civilian alliances that better meet the needs of all people in our area,” she says.