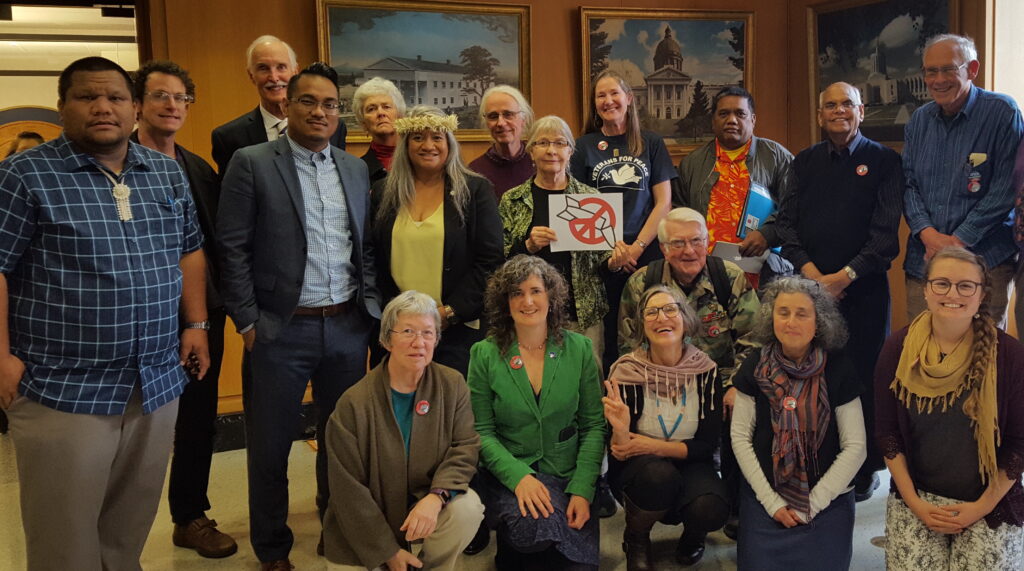 Today, Oregon’s House of Representatives voted to approve Senate Joint Memorial 5 (SJM 5), which urges congress to lead a global effort to reduce the threat of nuclear war, making it the second state in the nation after California to pass such legislation in both chambers. The bill passed the Oregon Senate on May 20th.

The bill was introduced at the request of Oregon Physicians for Social Responsibility with the support of 31 organizations around the state and garnered moving testimony from a Japanese Hibakusha (atomic bomb survivor), Hanford Downwinder, Atomic Veteran, the Marshallese community, a Corvallis city councilor, and more. The bill language and testimony can be viewed here. Chief Sponsors included Senator Michael Dembrow (D-Southeast Portland), Representative Tawna Sanchez (D-North & Northeast Portland), and Representative Alissa Keny-Guyer (D-Southeast Portland) along with 15 other legislators from throughout the state.

“As a survivor of Hiroshima, with memories of the horrific deaths and suffering still vivid in my mind even after nearly seventy-four years later, I don’t want anyone ever to experience what we lived through,” wrote Dr. Hideko Tamura, a Hibakusha who lives in Medford, Oregon, in her testimony supporting SJM 5. Dr. Tamura is acknowledged in the bill for dedicating her life to the eradication of nuclear weapons.

SJM 5 acknowledges that Oregon taxpayers are spending roughly $188 million annually on nuclear weapons, money that could be better spent on education, health care, infrastructure and the environment. It calls out the racial injustice and harm to human health that nuclear weapons have already caused from uranium mining on indigenous land to weapons testing in the Marshall Islands to the bombing of Hiroshima and Nagasaki to the contamination of the Hanford Nuclear Reservation upriver from our state. It asserts that treaties and international agreements that are now being abandoned by the US administration such as the INF treaty and the Joint Comprehensive Plan of Action (Iran Nuclear Deal) actually keep Oregonians safe.

“As a member of the Hanford Clean Up Board, the intergovernmental body overseeing the clean up of the most toxic contamination site in the Western Hemisphere, I have witnessed first-hand the difficulty and extreme cost that nuclear storage and decontamination efforts incur,” explained Representative Tawna Sanchez, one of the bills chief sponsors. “We are still attempting to deal with today, the lingering residue of the nuclear decisions of our past, and it is literally costing us billions of dollars.”

The bill supports federal legislation that would stop the President’s sole unchecked power to launch nuclear weapons, end nuclear first-strike, take nuclear weapons off hair-trigger alert, stop wasteful spending on a new nuclear arms race, and lead negotiations with other nuclear armed states to eliminate nuclear weapons. It also calls on the US government to join the Treaty on the Prohibition of Nuclear Weapons which is supported by the majority of the world’s nations.

“Oregonians have the human right to live a life free from nuclear contamination and the threat posed by the reckless use of nuclear weapons,” said Representative Alissa Keny-Guyer, a chief sponsor who carried the bill on the House floor. “At this moment in time, when the risk of nuclear war is higher than any time since the cold war, we must do everything we can to work for nuclear disarmament.”

“In our current political climate with the looming threats of war and a new nuclear arms race, it’s vital that local elected officials speak up for diplomacy and protecting their constituents from the devastation of nuclear weapons and war,” said Kelly Campbell, Executive Director of Oregon Physicians for Social Responsibility. “I applaud Oregon’s legislature for passing this bill and joining with the majority of countries in the world that support the Treaty on the Prohibition of Nuclear Weapons.”