Once Upon A Time: At the Crosses of Lafayette, Memorial Day, 2011 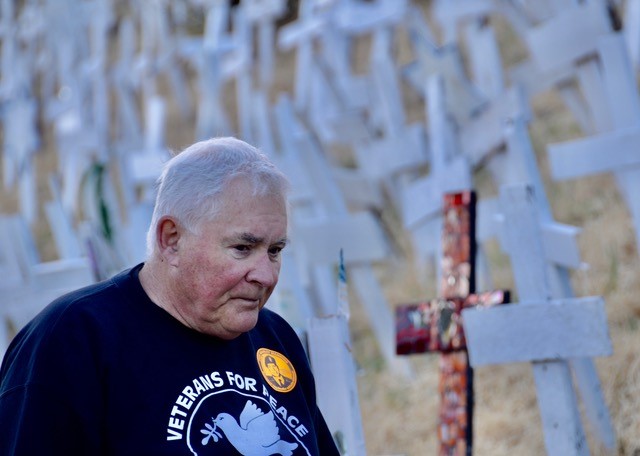 One day a little girl in class approached her teacher and whispered as if a secret, “Teacher, what was war?” Her teacher sighed, replied, “I will tell to you
a fairy tale, but I must warn you first that it is not
a tale you will understand; it is a tale for adults —
they are the question, you are the answer — Once…”

She said, once upon a time…

there was a country that was always at war
— every hour of every day of every year —
it glorified war and ignored those who died,
it created its enemies and slaughtered and lied,
it tortured and murdered and butchered and cried
to the world of security needs, of freedom and peace
that hid well the greed that makes profits increase.

Fiction and fantasy, of course, but imagine it if you can,
and imagine also the inhabitants of that fictional land,
those who laughed and partied and were warm and well fed,
who married their sweethearts and had children who led
lives of the free in homes of the brave filled with twitters
and tweets and occasional bleats of happy talk critters,
the entire family all playing the roles of fairy tale clever,
a real make-believe land in which nobody ever, never
once in any single day, made any effort to end the wars
that made their country the country that was always at war.

Imagine also the enemy, those who were bombed
and droned, dragged into the streets and shot, those
whose families were destroyed, the sons who watched
their fathers killed, the daughters who saw their mothers
violated, the parents who sank to the ground as their
children’s lives soaked the soil on which they kneeled,
those who would forever be the enemy of the country
that was always at war, those who would forever hate
the country that was always at war, and hate its people.

And so the world split apart: one half bathed in happy
lies, one half drenched in blood; both halves often one,
indistinguishable to the dead, indifferent to the maimed,
one gigantic world of misery, of IED’s, of arms and legs,
coffins and funerals, of men in tears, of women in black,
of gold stars, blue stars, stars and stripes, of black and red,
the colors of the anarchist, of green and bands of white,
the hated and the hate, the feared and the fear, the horror.

She said, once upon a time…

or words to that effect, adult words for adult ears,
and the child said, “Teacher, I do not understand,”
and the teacher said, “I know and I am pleased. I
shall take you to a hill that reflects the sun by day
and glows at night in moonlight. It is always shining.
It is alive. On it 6,000 stars are twinkling, 6,000
memories, 6,000 reasons that the wars you do not
understand are wars that we shall never have again,
for in this fairy tale, one day the people woke,
the people spoke, and the country that had always
been at war was now at peace, and the enemy, not
necessarily friend, was no longer enemy, and little
children did not understand, and the world rejoiced,”
to which the child begged, “Take me to this hill.
I wish to walk among the stars and play with them

Once upon a time — a fairy tale,
a teacher’s dream, a writer’s vow
to children all — we cannot fail
that little girl — the time is now.