By Cymry Gomery, Montréal for a World BEYOND War, January 17, 2022

Yves began by recapping Canada’s military history, which he described as: “an outgrowth of the British forces that conquered Turtle Island, often quite violently.” He explained how, over time, Canada’s military shifted quite naturally from being part of the British empire to that of the American empire. NATO was an initiative of the US, Britain and Canada, established in 1949, and it has been incredibly important to Canadian defense policy, which in turn determined all of our foreign policy. Engler quoted historian Jack Granatstein who said that Canada had devoted 90% of its military efforts to the NATO alliance since 1949, and nothing has substantially changed.

NATO’s initial mandate was to block the left (“communists”) from winning elections after WWII. Troops were stationed to stop the wave of support for the Left and communism, under Lester B. Pearson. The other motivation was to bring the former European colonial powers, like Canada, under the umbrella of American imperialism. (Engler adds that, the Russian threat was a straw man argument, since WWII left Russia severely weakened, with 20 million people dead.) Similarly, the Korean War in 1950 was justified because of a perceived threat to NATO.

Engler went on to list numerous examples of Canadian complicity in NATO wars of colonial aggression: 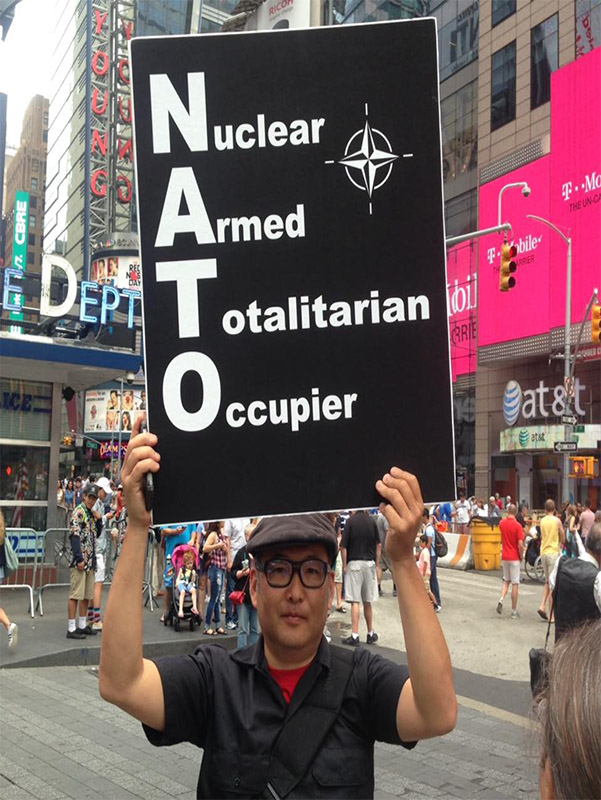 Protester at a NYC anti-NATO rally, from https://space4peace.blogspot.com/

Engler reminded us that Russia under Gorbachev had extracted a promise from NATO to avoid expansion eastward. In 1981 as Russian troops withdrew from Germany, the promise was that Germany would be allowed to be unified and to join NATO, but NATO wouldn’t expand even one inch eastward. Unfortunately, that promise was not kept–over the past 30 years, NATO has expanded far eastward, which Moscow views as very threatening. Now there are NATO troops stationed permanently right on Russia’s doorstep. Understandably, since Russia was destroyed in wars in the 1900s, they are getting nervous.

NATO has been a justification for the Canadian Government to vote against various measures to denuclearize.

Traditionally, Canada has been inconsistent, verbally supporting denuclearization, yet voting against various initiatives that would achieve this. The Canadian Government has opposed efforts to have a nuclear weapons free zone. There is a self-interested trade aspect to this — the bombs that were dropped by the Americans on Japan, for example, were made with Canadian uranium. For more than a decade, in the 1960s, there were US nuclear missiles stationed in Canada.

Engler emphasized that it is nonsensical for Canada to evoke a “defensive strategy” partnership with the US, which has 800 military bases worldwide, and “troops stationed in something like 145 countries in the world.”

“It’s a empire of of unique proportions in the history of humanity…. So this is not about defense, right? It’s about domination.”

2019 protest in Belgrade, Serbia, to honour the victims of a NATO invasion in Yugoslavia twenty years earlier (Source Newsclick.in)

NATO or NORAD is used to justify purchases like upgraded radar satellites, war vessels, and of course the looming plan to purchase 88 new fighter jets. Engler feels that since the Americans need to approve whatever is chosen by the Canadian air force so that it is interoperable with NORAD, it is almost certain that Canada is going to purchase the US-made F 35 fighter jet.

Complicity with US Imperialism began with NORAD

North American Aerospace Defense Command, or NORAD, is a Canada-US organization that provides aerospace warning, air sovereignty, and protection for Northern America.The NORAD commander and deputy commander are, respectively, a US general and a Canadian general. NORAD was signed in 1957 and officially launched in 1958.

NORAD supported the the US invasion of Iraq in 2003, making Canada complicit even thought we ostensibly were not part of that invasion. NORAD provides support for US bombings in Afghanistan, Libya, Somalia for example—air wars require logistical support from the ground and NATO or NORAD is part of that. Engler joked that “If the US were to invade Canada, it would be with the support of Canadian officials and of NORAD headquarters in Canada.”

Engler felt that rhetoric that positions Canada as a subservient lapdog to the US misses the point, since the

Canadian military benefits from its relationship with the US superpower—they get access to sophisticated weaponry, they can act as proxies for US military commanders, the Pentagon is a top customer for Canadian arms manufacturers. In other words, Canada is part of US militarism at a corporate level.

Regarding Canada’s geopolitical role, Engler adds, “The Canadian military has been a part of the two main empires of the past couple hundred years and has done well …that’s been good for them.”

It stands to reason that the military is not supportive of peace, since peace is not good for their bottom line. Regarding heightened tensions with China in recent years, Engler notes that while the business class might be uncomfortable with vilifying China, which is a huge potential market for Canadian goods, the Canadian military enthusiastically supports ramping up tensions between the US and China. Because they’re so integrated with the US, they anticipate that their budgets will increase as a result.

Environment and climate change are not really on the agenda of NATO and NORAD. However, when it comes to denuclearization Engler muses that there is an angle for achieving government action: “We can really call out the Trudeau Government on its claims to support denuclearization and its claims to support the international rules based order and a feminist foreign policy—which would be served, of course, by Canada signing a UN nuclear Ban Treaty.”

Call to action and participant comments

Yves concluded his talk with a call to action:

“Even right now, in a political climate where the arms firms and the military have all their different institutions pumping out all their propaganda, the different think tanks and university departments—this huge public relations apparatus–there’s still quite a bit of of popular support for going in a different direction. It’s our job [to promote demilitarization and rules-based order], and I think this is what World BEYOND War, and obviously the Montreal chapter as well–is all about.”

One participant, Mary-Ellen Francoeur, commented that “For many years there has been a discussion of a UN Emergency Peace Force which would be trained to respond to all kinds of emergencies throughout the world, and doing nonviolent conflict resolution to prevent escalation. This was led by a Canadian proposal. How can we push for this movement? Canadians could be trained for all the services of such a Peace Force.”

Nahid Azad commented, “We need Ministry of Peace not Ministry of Defence. Not just name change – but policies opposite to current militarism.”

Kateri Marie, shared an anecdote about rules-based order, “I remember attending a 1980s Edmonton event where the Nicaraguan ambassador to Canada was asked about the US leading the rules-based international order. His reply: ‘Would you want Al Capone as a block parent?”

Mobilization Against War and Occupation (MAWO) – Vancouver provided an eloquent wrap for the meeting in the chat:

“Thank you to World BEYOND War for organizing and to Yves for your analysis today – especially about the impact of Canada’s complicity in US-led military alliances, wars and occupations. It is indeed very important that the peace and antiwar movement in Canada take a firm stand against NATO, NORAD and the other war- mongering alliances that Canada is a member of and supports. Money spent on war must instead be spent on social justice and the welfare of people in Canada, climate justice and the environment, health and education, and the upholding of Indigenous rights and improvement of the living conditions of Indigenous people.”

Thank you again Yves for your principled and clear talk, we believe that your analysis should be a basis for organizing a strong antiwar and peace movement in Canada.

What you can do to promote peace right now: