Millions Displaced By U.S. Combat Since 9/11 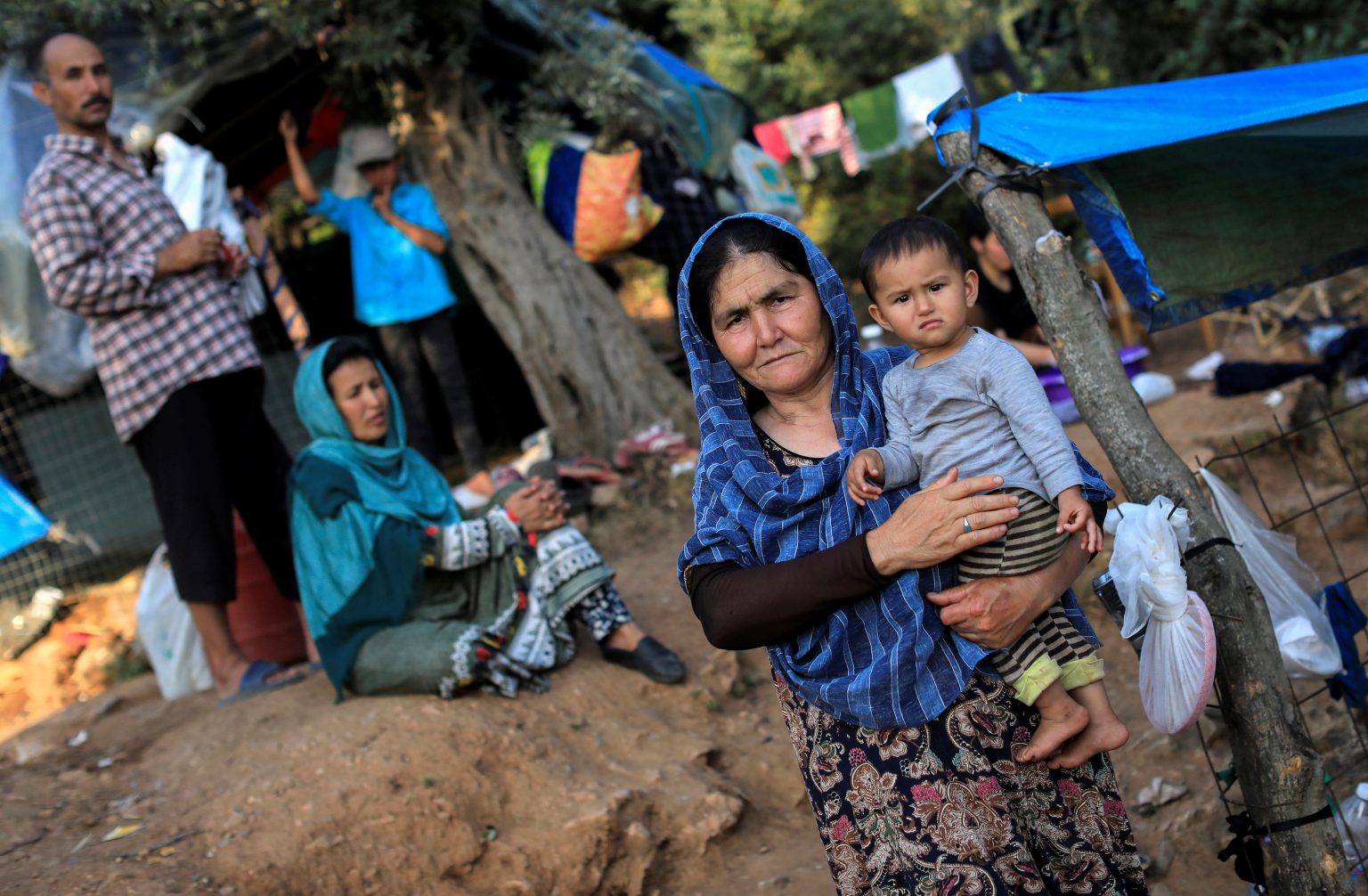 The wars the U.S. government has fought since the attacks of Sept. 11, 2001, have forced 37 million people — and perhaps as many as 59 million — from their homes, according to a newly released report from American University and Brown University’s Costs of War Project.

Until now, no one has known how many people the wars have displaced. Indeed, most Americans are likely unaware that U.S. combat operations have taken place not only in Afghanistan, Iraq and Syria, but also in 21 other nations since President George W. Bush announced a global war on terror.

Neither the Pentagon, the State Department nor any other part of the U.S. government has tracked the displacement. Scholars and international organizations, such as the United Nations refugee agency, UNHCR, have provided some data about refugees and internally displaced people (IDPs) for individual countries at war. But this data offers point-in-time counts rather than the cumulative number of people displaced since the wars started.

In the first calculation of its kind, American University’s Public Anthropology Clinic conservatively estimates that the eight most violent wars the U.S. military has launched or participated in since 2001 — in Afghanistan, Iraq, Libya, Pakistan, the Philippines, Somalia, Syria and Yemen — have produced 8 million refugees and asylum seekers and 29 million internally displaced people. 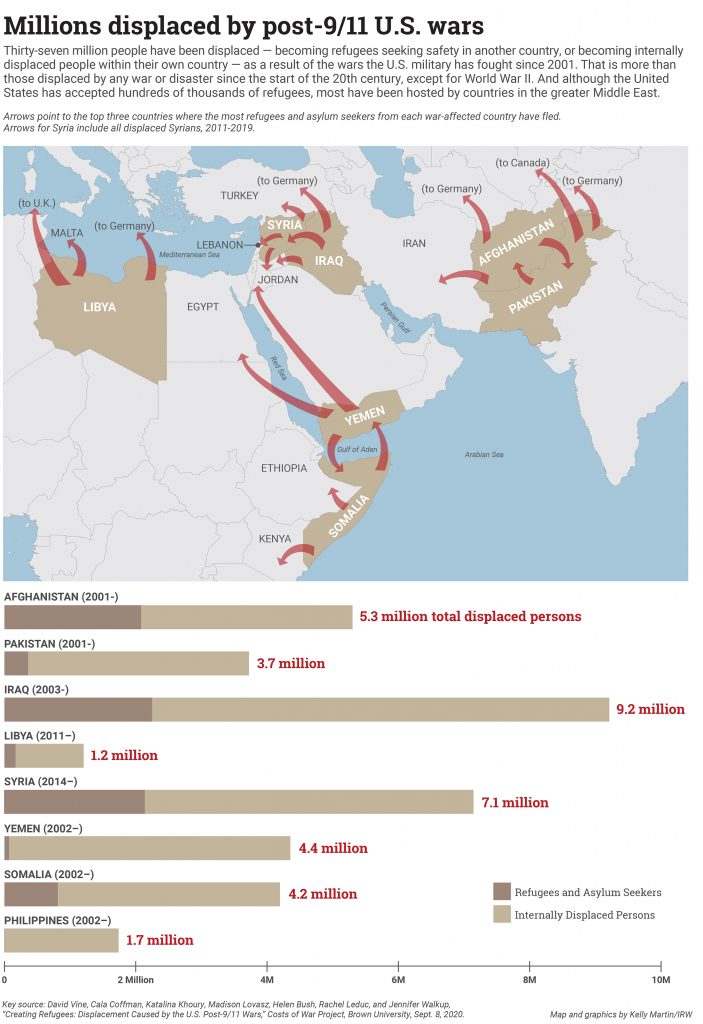 The estimated 37 million displaced is more than those displaced by any war or disaster since at least 1900, except for World War II, when 30 million to 64 million or more people fled their homes. Thirty-seven million exceeds those displaced during World War I (approximately 10 million), the partition of India and Pakistan (14 million) and the U.S. war in Vietnam (13 million).

Displacing 37 million people is equivalent to removing nearly all the residents of the state of California or all the people in Texas and Virginia combined. The figure is almost as large as the population of Canada. The United States’ post-9/11 wars have played an overlooked role in fueling the near-doubling of refugees and internally displaced people globally between 2010 and 2019, from 41 million to 79.5 million.

The U.S. government is not solely responsible for displacing 37 million people; the Taliban, Iraqi Sunni and Shia militias, Al-Qaida, the Islamic State group and other governments, combatants and actors also bear responsibility.

Pre-existing conditions of poverty, global warming-induced environmental change and other violence have contributed to driving people from their homes. However, the eight wars in the AU study are ones the U.S. government bears responsibility for initiating, for escalating as a major combatant or for fueling, through drone strikes, battlefield advising, logistical support, arms sales and other aid.

Specifically, the Public Anthropology Clinic estimates the displacement of:

Most refugees from the wars in the study have fled to neighboring countries in the greater Middle East, especially Turkey, Jordan and Lebanon. About 1 million reached Germany; hundreds of thousands fled to other countries in Europe as well as to the United States. Most Filipinos, Libyans and Yemenis have been displaced within their own countries.

The Public Anthropology Clinic used the most reliable international data available, from the UNHCR, the Internal Displacement Monitoring Centre, the International Organization for Migration and the UN Office for the Coordination of Humanitarian Affairs. Given questions about the accuracy of displacement data in war zones, the calculation methodology was a conservative one.

Statistics for refugees and asylum seekers easily could be 1.5 to 2 times higher than the findings suggest, yielding some 41 million to 45 million people displaced. The 7.1 million Syrians displaced represent only those displaced from five Syrian provinces where U.S. forces have fought and operated since 2014 and the beginning of the U.S. war against the Islamic State in Syria.

A less conservative approach would include the displaced from all of Syria’s provinces since 2014 or as early as 2013 when the U.S. government began backing Syrian rebel groups. This could take the total to between 48 million and 59 million, comparable to the scale of World War II’s displacement.

The clinic’s 37 million estimate is also conservative because it does not include millions displaced during other post-9/11 wars and conflicts involving U.S. forces.

The damage inflicted by displacement has been profound across all 24 countries where U.S. troops have deployed. Losing one’s home and community, among other losses, has impoverished people not just economically but also psychologically, socially, culturally and politically. The effects of displacement extend to host communities and countries, which can face burdens hosting refugees and those who have been displaced internally, including increased societal tensions. On the other hand, host societies often benefit from the arrival of displaced people because of greater societal diversity, increased economic activity and international aid.

Of course, displacement is just one facet of war’s destruction.

Ultimately, the harm inflicted by war, including on the 37 million to 59 million displaced, is incalculable. No number, no matter how large, can capture the immensity of the damage suffered.