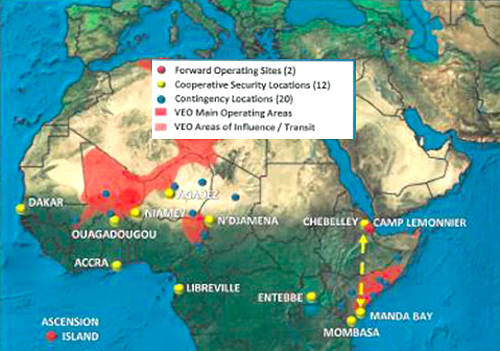 The Overseas Base Realignment and Closure Coalition has sent a letter urging the Senate and House Armed Services Committees to include a reporting requirement on overseas bases in the FY2020 NDAA to increase transparency, save taxpayers’ dollars, and improve national security. The letter, attached and below, was signed by more than two dozen military base experts and organizations.

Questions can be directed to OBRACC2018@gmail.com.

We are a group of military base experts from across the political spectrum writing to urge you to maintain Sec. 1079 of H.R. 2500, “Report on Financial Costs of Overseas United States Military Posture and Operations,” in the National Defense Authorization Act for Fiscal Year 2020. If implemented rigorously, this report would increase transparency and enable better oversight over Pentagon spending, contribute to critical efforts to eliminate wasteful military expenditures, and enhance military readiness and national security.

For too long, there has been little transparency about U.S. military bases and operations overseas. There are currently an estimated 800 U.S. military bases (“base sites”) outside the 50 states and Washington, DC. They are spread across some 80 countries and territories—roughly double the number of host countries compared to the end of the Cold War.[1]

Research has long shown that overseas bases are particularly difficult to close once established. Often, bases abroad remain open due to bureaucratic inertia alone.[2] Military officials and others frequently assume that if an overseas base exists, it must be beneficial; Congress rarely forces the military to analyze or demonstrate the national security benefits of bases abroad.

The Navy’s “Fat Leonard” corruption scandal, which resulted in tens of millions of dollars in overcharges and widespread corruption among high-ranking naval officers, is one of many examples of the lack of proper civilian oversight overseas. The military’s growing presence in Africa is another: When four soldiers died in combat in Niger in 2017, most members of Congress were shocked to learn that there were approximately 1,000 military personnel in that country. Although the Pentagon has long claimed it has only one base in Africa—in Djibouti—research shows that there are now around 40 installations of varying sizes (one military official acknowledged 46 installations in 2017).[3] You are likely among a relatively small group in Congress who know that U.S. troops have been involved in combat in at least 22 countries since 2001, with frequently disastrous results.[4]

Current oversight mechanisms are inadequate for the Congress and the public to exercise proper civilian control over the military’s installations and activities overseas. The Pentagon’s annual “Base Structure Report” provides some information about the number and size of base sites overseas, however, it fails to report on dozens of well-known installations in countries worldwide and frequently provides incomplete or inaccurate data.[5] Many suspect the Pentagon does not know the true number of installations abroad.

The Department of Defense “Overseas Cost Report,” submitted in its budget documentation, provides limited cost information about installations in some but not all countries where the military maintains bases. The Report’s data is frequently incomplete and often nonexistent for many countries. For more than a decade, DoD has reported total annual costs at overseas installations of around $20 billion. An independent analysis indicates that the actual cost of operating and maintaining bases abroad is more than double that figure, exceeding $51 billion annually, with total costs (including personnel) of around $150 billion.[6]The lack of oversight over such spending is particularly surprising given the tens of billions of dollars flowing from Congress members’ states and districts to locations overseas every year.

If implemented properly, the report required by Sec. 1079 of H.R. 2500 would significantly improve the transparency of the military’s operations overseas and allow the Congress and the public to exercise proper civilian oversight over the Pentagon. We urge you to include Sec. 1079 in the FY2020 NDAA. We also urge you to revise the amendment’s language to strike the words in paragraph 1, “included on the enduring location master list.” Given the inadequacy of the Base Structure Report, the required reporting should document the costs and national security benefits of all U.S. installations overseas.

Thank you for taking these important steps to increase transparency, save taxpayers’ dollars, and improve national security.

Overseas Base Realignment and Closure Coalition

Guahan Coalition for Peace and Justice

John Lindsay-Poland, Stop US Arms to Mexico Project Coordinator, Global Exchange; author, Emperors in the Jungle: The Hidden History of the U.S. in Panama

Del Spurlock, Former General Counsel and Assistant Secretary of the US Army for Manpower and Reserve Affairs

Colonel Ann Wright, US Army retired and former US diplomat

[2] One of the rare Congressional studies of U.S. bases and presence overseas showed that “once an American overseas base is established, it takes on a life of its own…. Original missions may become outdated, but new missions are developed, not only with the intent of keeping the facility going, but often to actually enlarge it.” United States Senate, “United States Security Agreements and Commitments Abroad,” Hearings before the Senate Subcommittee on United States Security Agreements and Commitments Abroad of the Committee on Foreign Relations, Ninety-first Congress, Vol. 2, 2417. More recent research has affirmed this finding. E.g., John Glaser, “Withdrawing from Overseas Bases: Why a Forward-Deployed Military Posture Is Unnecessary, Outdated, and Dangerous,” Policy Analysis 816, CATO Institute, July 18, 2017; Chalmers Johnson, The Sorrows of Empire: Militarism, Secrecy, and the End of the Republic (New York: Metropolitan, 2004); Vine, Base Nation.