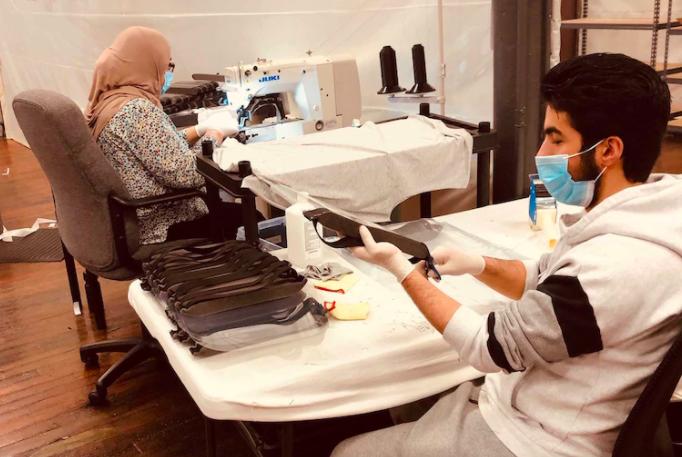 National emergencies bring out American ingenuity and a willingness to shift gears—like the couple in Maine who wrote recently in The Washington Post about retooling their company to make masks instead of hoodies. Most often invoked as precedent is the rapid conversion of auto factories to turn out tanks for World War II.

That national emergency morphed into a long-term Cold War. Though that war did eventually end, the concentration of national resources on the military has not. We continue to allot more than half of our federal budget—the part that Congress votes on every year—to the Pentagon, and more money, adjusted for inflation, than it ever got during the Cold War.

We don’t know when the pandemic will end, or how it will permanently alter American life. But we do know that we’ll need to do some major, long-term gear-shifting. Now exposed are the gaping holes in our public health system created by budgetary neglect. We will need to fill these holes permanently rather than with emergency scrambling, to adequately prepare ourselves for the next epidemic or pandemic. And one of these, and then another one, will be coming, more or less severe depending on what we do in the meantime. This certainty is one of the consequences scientists have identified of accelerating climate change.

A major rebalancing of the budget will be required to repurpose its concentration of Pentagon spending toward the viral threat we have all now been forced to recognize. This is rapidly turning into conventional wisdom.

The military contractors will try to prevent this. Making them part of the solution will help.

The budget imbalance has skewed our productive capacity. While we have lavished resources on building a world-leading military industrial base, we have watched as China has been investing heavily in medical supplies, as well as solar power. Military contractors will follow the money; they always have. If the federal budget directs more money toward developing domestic capacity in these fields, the contractors will try to get involved.

There’s a problem with this scenario, though, rooted in the differences between military and civilian manufacturing. When military contractors have tried to apply the contracting practices they know, such as military-style machining standards, to enter other fields, costs have soared beyond what the commercial market will bear. When a military division of Boeing tried to make buses back in the 70s, following the end of the Vietnam War, the military practice of “concurrency”—selling and deploying its products before the bugs had been worked out—had their buses breaking down all over town. (When concurrency was abandoned, the buses eventually ran fine, but the public relations damage was done.)

After the Cold War ended—the next time a drop in the military budget led Pentagon contractors to look hard at what else they could do—federal and state governments made some modest efforts to overcome these problems. The Clinton administration’s Technology Reinvestment Project, for example, teamed up commercial with military manufacturers, so that the military guys could learn from the commercial guys how to make things the commercial market would buy. The Commerce Department’s Manufacturing Extension Program developed an expertise in helping military manufacturers retool their production lines and retrain their workers for commercial work. We’ll need new versions of programs like these now.