Asparagus and Bombers in Germany 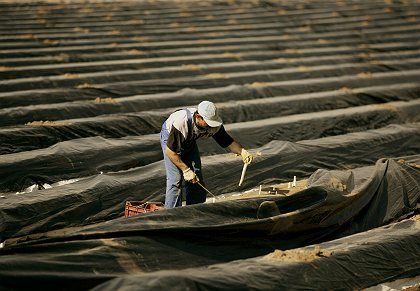 In late spring an age-old tradition places asparagus – the white kind preferred here – at the very top of German menus. But only until St. John’s Day, June 24th (the summer solstice). After that date farmers stop harvesting – to give plants at least 100 days to convalesce for the next year before the first frosts arrive (if frosts do arrive this year!).

But 2020 presents two problems. The arduous harvesting was done in the past by laborers, usually Eastern Europeans, Germany’s “braceros”. But with European Union borders locked shut by the virus epidemic, who would cut the bleached asparagus? And when cut (as cut they must be, four or five times a season), with restaurants and hotels closed by the virus and many private customers having less or no money for expensive vegetables, who would buy and eat them? (Side note: the GDR employed no braceros – so asparagus was mostly quite rare).

Strong pressures have achieved some solutions. The virus figures are slowing down just enough to try a limited re-opening of business. Germany’s sixteen states differ on when, which and how much social distancing is required, so there’s almost total confusion, and Angela Merkel warns of a possible second round of infection – and shutdowns. But some portion of the asparagus may now get sold and eaten before June 24th – and not get dumped, like all too much milk and other foodstuffs.

As for labor power; while it required lengthy bargaining and red tape to rescue 70 child refugees from the immensely over-crowded, filthy camps on the island of Lesbos, it somehow proved quite possible to break though all restrictions and fly in 80,000 Rumanians, quarantine them and let them dig up the asparagus – until St. John’s Day.

But while prices and recipes for asparagus, dates and restrictions for re-opening bars or restaurants and for rescuing major league soccer dominated the media and many conversations, a far more significant matter found little attention. Ever since 1955 an estimated twenty American nuclear bombs have been stored underground at the US Air Force base in Büchel in Rhineland.  Just a short sprint away the German Luftwaffe’s Torpedo aircraft sit ready and waiting to transport and fire those bombs. There is no secret as to where and whom they are aimed at. What a jolly symbol of NATO cooperation!

Until now, despite inspired, moving rhetoric by top politicians about world peace and solidarity, the presence of those US bombs, viewed by many as a violation of basic German law, is commonly met either with silence or mumbled explanations and excuses. All political parties tend to stare into their laps or out the window when questioned about this – except for one single party in the Bundestag which demands that they be removed – and banned! That is DIE LINKE (Left)! But who listens to them – or reports on their statements?

Then, in late April, Defense Minister Anneliese Kamp-Karrenbauer (AKK) sent an E-mail to her USA colleague Mark Esper. She wanted to replace Germany’s poor, aging old Torpedo bombers with thirty more modern, efficient killers, Boeing’s F18 Super Hornets and fifteen of its Growler-type F18 jets, which pierce deep into the ground.  Since each plane costs over $70,000,000, that amount, multiplied by 45, would certainly be a welcome contribution to Boeing’s sagging accounts.

But halt, Boeing beneficiaries! Don’t count chickens – or Hornets – before they hatch! Frau AKK made a silly mistake. She was sure of support from the leaders of her own “Christian” party, who routinely support anything with fire power. She also felt certain of approval by the two Social Democratic (SPD) leaders of the government’s junior coalition party. Those two, Vice-Chancellor Olaf Scholz and Foreign Minister Heiko Maas, enjoy the closest buddy-buddy relationship with their CDU senior partners. But somehow she totally forgot to consult with either the caucus or another man with a key position in the party, the chair of the Social Democratic caucus in the Bundestag. It suddenly turned out that he, Rolf Mützenich, a representative from Cologne, dares to oppose the purchase of new belligerent warplanes. This neglectful little boo-boo of hers created at least a minor sensation!

The SPD has always gone along with the military policies of the “Christians” (CDU and their Bavarian sister, the CSU). They were solid “Atlanticists”, who happily embraced the big brass in the Pentagon and leading men (or women) in Washington as welcome protectors from an eastern menace – which never existed. As German strength grew, they show a willingness to be a strong auxiliary force in the pursuit of world hegemony, both military and economic, with happy results measured in billions for a few dozen powerful giants. And surely some shiny new gold stars, fancy crosses and other awards for the big brass.

But the apple cart had begun to totter. Its weak-kneed social position had cost the SPD more and more votes and members; the party threatened to sink into a sycophantic crawl and minor league status. Then, in a party referendum, the remaining members (still in the mid six-digit range) shocked everyone – except the majority of members – by choosing as co-chairs a man and a woman, till then not widely known, who lean toward the party’s weak left wing. The mass media predicted the party’s quick demise as a result, but were disappointed. It has held its own and even gained a little. But only a little; it is still competing with the Greens simply to preserve its once unquestioned second place status in the polls.

And now came this jolt! Faced with the confusion of Donald Trump’s changing mix of accusations and demands for more and more “security” billions, Mützenich declared: “Atomic weapons on German territory do not increase our security, they do just the opposite.” That, he stated, “is why I oppose the purchase of any replacements for war planes projected for use as atomic bombers … It is high time that Germany rejects any future stationing!”

And, even more worrisome for some, the new co-chair of the party, Norbert Walter-Borjans, backed him up: “I maintain a clear position against the stationing, the control, and most definitely the use of nuclear weapons…”  Walter-Borjans made it double clear: “That is why I oppose purchasing any successors for planes meant to be used as atomic bombers. “

This was mutiny from the top – quite unknown (except perhaps in DIE LINKE)! Mützenich’s opposite number in the Bundestag, from the CDU, said indignantly: “Speaking for my caucus, the continuation of nuclear participation cannot be put in question … That position is not negotiable. Nuclear deterrence is indispensable for the security of Europe.” (For him, evidently, Russia was somehow no longer part of Europe.)

The Atlanticists jumped to defend Frau AKK: “Only if we remain within the nuclear framework will we have a say in using – or not using – such weapons. If we back out, we can no longer join in NATO decision-making on military engagement.”

To which Mützenich responded by calling the risk of escalation unpredictable and asking: “Does anyone really believe that, if Donald Trump decides to use nuclear weapons, Germany could restrain him in such a decision simply because we might be willing to transport a number of the warheads?”

It remains to be seen which side is stronger in a divided SPD; it would be an amazing upset if the anti-missile forces were to prevail. They are the same people. a minority, who urged Germany to break away from its inborn interdependence with Washington, defy imposed economic sanctions against Russia and oppose growing NATO threats along the Russian border – and now newly against China as well. Instead, these voices urged reasonable relationships with both countries, replacing the increasingly bellicose propaganda campaigns with words and policies conducive to world peace and cooperation. Pandemics and the frightening increase in ecological damage demand nothing less. How much better if Germans no longer had no more war plans to chew on but rather, very peacefully, asparagus – and far longer than any St. John’s day deadlines.