Jean Stevens Continues to Ring the Bell for Peace 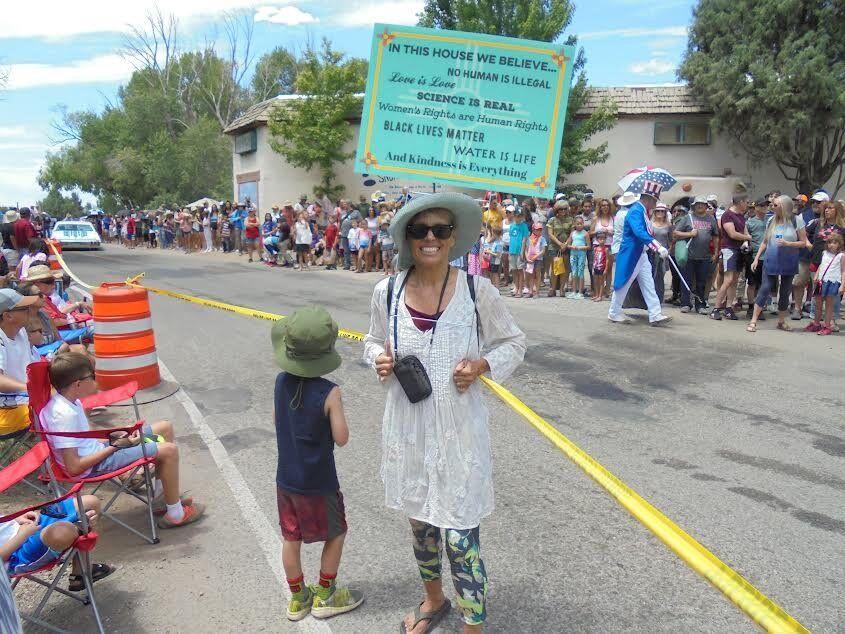 Jean Stevens is a retired Taos Municipal Schools teacher, former Professor of Art History at UNM-Taos, director of the Taos Environmental Film Festival and a leader and mentor in the Climate Reality Project. She is also passionate about the abolition of nuclear weapons. During the pandemic she continued to ring the bell, attending conferences and communicating with movement leaders globally. She said “It is my hope that the wisdom of peace will become the dominant call in 2022.”

On the eve of a new year, Tempo reached out to Stevens and asked about what has been accomplished in 2021 towards peace without nuclear weapons, and what to think about in 2022.

On January 22, 2021, the United Nations’ Treaty for the Prohibition of Nuclear Weapons was ratified with 86 signatories and 56 ratifications. The Treaty on the Prohibition of Nuclear Weapons outlaws the transfer of the weapons and forbids signatories from allowing any nuclear explosive device to be stationed, installed or deployed in their territory. Most of the world’s population wants nuclear weapons abolished, as shown by various polls.  Here are the accomplishments as noted by the International Campaign to Abolish Nuclear Weapons [ICAN]. One hundred and twenty seven financial institutions stopped investing in companies producing nuclear weapons in 2021, with many institutions citing the treaty’s entry into force and the risk of a negative public perception as reasons for the change in their investment policies.

Norway and Germany announced that they will attend the The Promise of the Treaty on the Prohibition of Nuclear Weapons [TPNW] first Meeting of States Parties as observers, making them the first NATO states (and in Germany’s case, a nuclear weapon-hosting state) to break through the nuclear-armed states’ pressure against the treaty.  Eight new states parties have joined the treaty, and many other states are far along in their domestic process. New York City called on the U.S. government to join the treaty — and on its comptroller to divest the public pension funds from companies tied to nuclear weapons.

At the end of the Cold War, because of negotiations with General Secretary Gorbachev and President Reagan, over 50,000 nuclear weapons were destroyed. There remains 14,000 nuclear weapons in the world, some on hair trigger alert, which can destroy our planet many times over and which almost happened because of accidents like the one that happened September 26, 1983 near Moscow and in the Caribbean via a Soviet submarine on October 27, 1962 during the Cuban Missile Crisis. The good news is we can dismantle nuclear bombs easily with a UN and multi-national team of scientists and nuclear specialists. We only need the will to do so.

Dark clouds are forming in our Land of Enchantment. There is a need for everyone, of all faiths, to come together for peace on our precious Mother Earth. We are all in grave danger as the military/industrial/nuke budget continues to grow along with COVID variants and climate change. The time has come for those who believe in the teachings of Saint Francis to take a pilgrimage from Chimayo to Santa Fe; the city named after Saint Francis, on behalf of peace and the abolition of nuclear weapons from the sacred soil of New Mexico and our planet.

The time has come for us all to wake up to the Faustian deal being made in a recent Taos News advertisement by the Los Alamos Laboratory, which stated, “Investing in learning and human potential.” As reported by the Los Alamos Study Group, over 80 percent of Los Alamos National Lab’s mission is for the development of nuclear weapons and research.

Many experts believe we are living in a more dangerous time than during the Cold War. As former Secretary of Defense William Perry has noted, ICBMs are “some of the most dangerous weapons in the world because a president would have only a matter of minutes to decide whether to launch them upon warning of a nuclear attack, increasing the possibility of an accidental nuclear war based on a false alarm. The respected Bulletin of Atomic Scientists has set its “doomsday clock” at 100 seconds to midnight, a sign of how close humanity has come to a nuclear conflict. And a study by the International Physicians for the Prevention of Nuclear War and Physicians for Social Responsibility has shown that the use of even a fraction of the world’s current nuclear arsenals could spark a global famine that would put billions of lives at risk.”

The Dalai Lama, and other global spiritual leaders, have spoken on behalf of the total prohibition of nuclear weapons. Children today must have a future free of a mass extinction because of an atomic Ice Age. Current global expenditures are $72.6 billion for nuclear weapons. All of our lives on Mother Earth are at risk because of the insanity of giving money to defense contractors rather than to schools, hospitals, sustainable farms and finding solutions to climate change.

We must all raise our voices for the Treaty for the Prohibition of Nuclear Weapons and support, with donations if possible, ICAN (International Campaign to Abolish Nuclear Weapons). Schools throughout the U.S.A., and abroad, should include books and films in their curriculum and we should explore it, in depth, along with climate change. Remember, we can never win a nuclear war!