Easter Peace Marches in Cities Across Germany and in Berlin 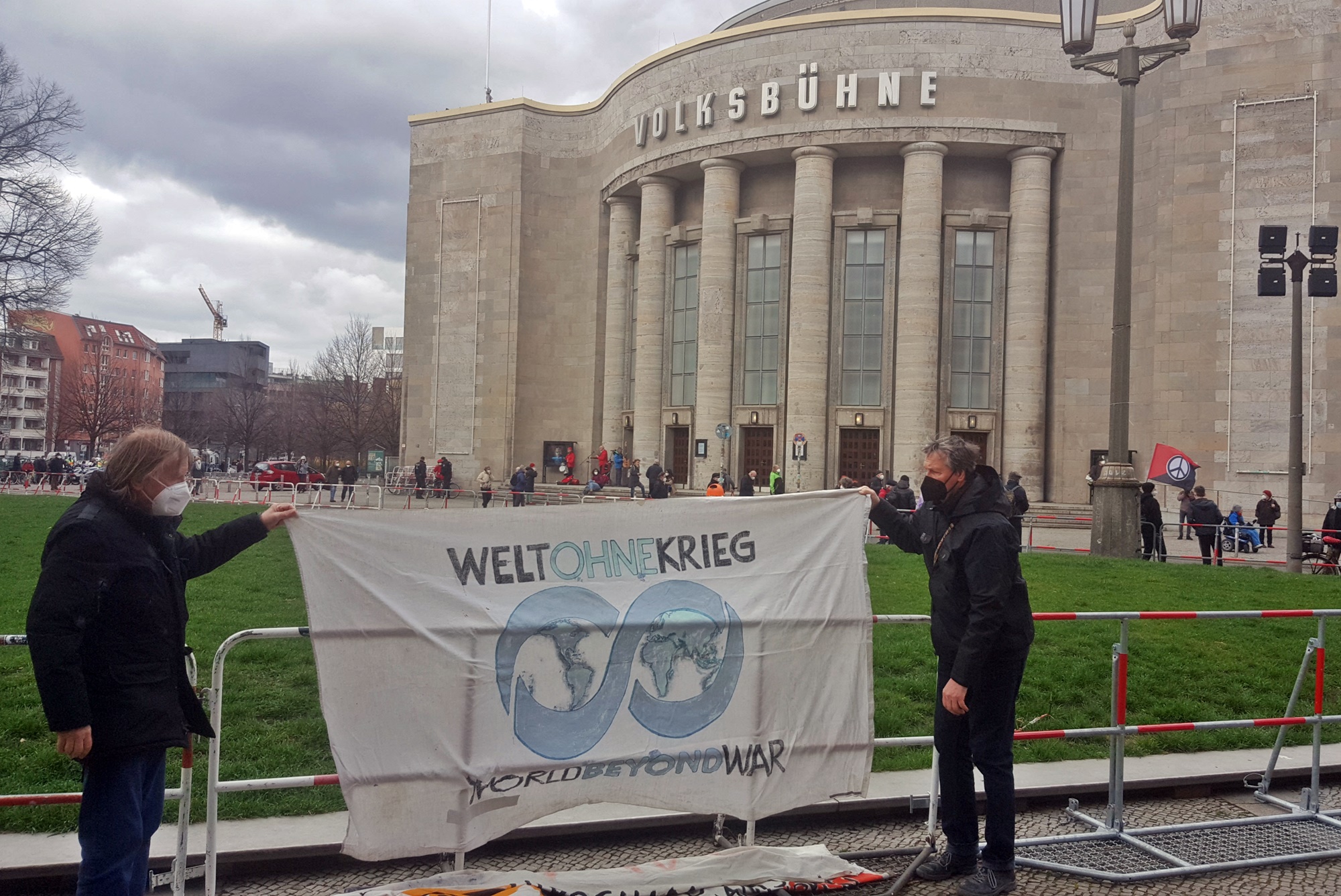 The Easter March is a pacifist, anti-militarist annual manifestion of the peace movement in Germany in the form of demonstrations and rallies. Its origins go back to the 1960s.

This Easter Weekend many thousands participated in the traditional Easter Marches for Peace in many cities across Germany and also in the capital Berlin.

Under strict Covid-19 restrictions around 1000-1500 peace activists took part in the march in Berlin this Saturday, protesting for nuclear disarmament and against NATO forces increasingly encroaching towards Russia’s borders.

Signs, banners and flags in support of peace with Russia and China and in support for deescalation in Iran, Syria, Yemen and Venezuela, alongside peace symbols were carried. There were banners protesting the „Defender 2021“ wargames.
One group prominently displayed banners and signs promoting the demand for Nuclear Disarmament.

The Berlin Protest is traditionally organized by the Berlin based Peace Coordination (FriKo), the main peace movement in the german capital.

In 2019 Easter Peace Events took place in around 100 cities. Central demands were military disarmament, a world free of nuclear weapons and the stop of German arms exports.

Due to the Corona crisis and very strict contact restrictions, the Easter marches in 2020 did not take place as usual. In many cities, instead of the traditional marches and rallies, newspaper advertisements were placed and speeches and messages of the peace movement were spread via social media.

This year the Easter Marches were smaller,some were held online. They were dominated by the upcoming federal elections in September 2021. In many cities, the focus was the demand to reject the two percent increase target for the NATO-budget. This means less than 2% of GDP for military and armaments. The pandemic has proven that the ever-increasing increase in military spending is false and completely counterproductive to the deescalating escalating global crisis. Instead of the military, sustainable investments in civil areas such as health and care, education and socially acceptable ecological restructuring need to be demanded.

No militarization of the EU, no arms-exports, and no german participation of foreign military-missions.

Another central theme of this year’s Easter marches was Germany’s position to the Nuclear Weapons Prohibition Treaty (AVV). Many peace groups stress the importance of the treaty in January – especially after the German Parliaments own scientific service recently refuted one of the main arguments against the treaty. The ban on nuclear weapons is not in conflict with the Non-Proliferation Treaty (NPT). Now we finally have to act: The upcoming armament of the atomic bombs stationed in Germany and the plans to acquire new atomic bombs must finally be stopped!

Another very important issue was the War against Yemen and the Arms-exports to Saudi-Arabia.

In addition, the drone debate was an important topic at the Easter Marches. in 2020 it was possible to stop the planned and final plans of the ruling government coalition to arm combat drones for the German armed forces for the time being – but Germany continues to participate in the development of the armed euro drone and the European Future Combat Air System (FCAS) fighter aircraft. The peace movement advocates an end to the previous drone projects and efforts to control, disarm and ostracize them.

Several groups in Berlin also emphasized the need to fight the political trial against Julian Assange, who is risking extradition to the U.S., after having been locked up in the embassy of Ecuador in London and now for more than a year in the high-security prison in the UK.

One more issue in Berlin was also the mobilisation for the Campaign for a „Global Demand to 35 Governments: Get Your Troops Out of Afghanistan“. A campaign that was initiated by the global network World Beyond War. It is planned to deliver the petition to the german government.

Another appeal was raised for the fast approval of Russian, Chinese and Cuban vaccines and medicines to fight Covid-19 around the world.

Speakers in Berlin criticized the policy of NATO. For the current militarisation Russia and now also China must serve as enemies. Peace with Russia and China was the theme of many banners, as well as the ongoing campaign under the slogan “Hands off Venezuela”, which is a campaign for progressive movements and governments in South-America. Against the Blockade of Cuba and against policeviolence in countries like Chile and Brasil. Very important elections are coming up very soon in Ecuador, in Peru and later also in Brasil, Nicaragua.

‘Easter march’ demonstrations have their origins in the Aldermaston Marches in England and were carried over to West Germany in the 1960s.