Don’t Be Used by War Profiteers! Do We Really Need Armed Drones? 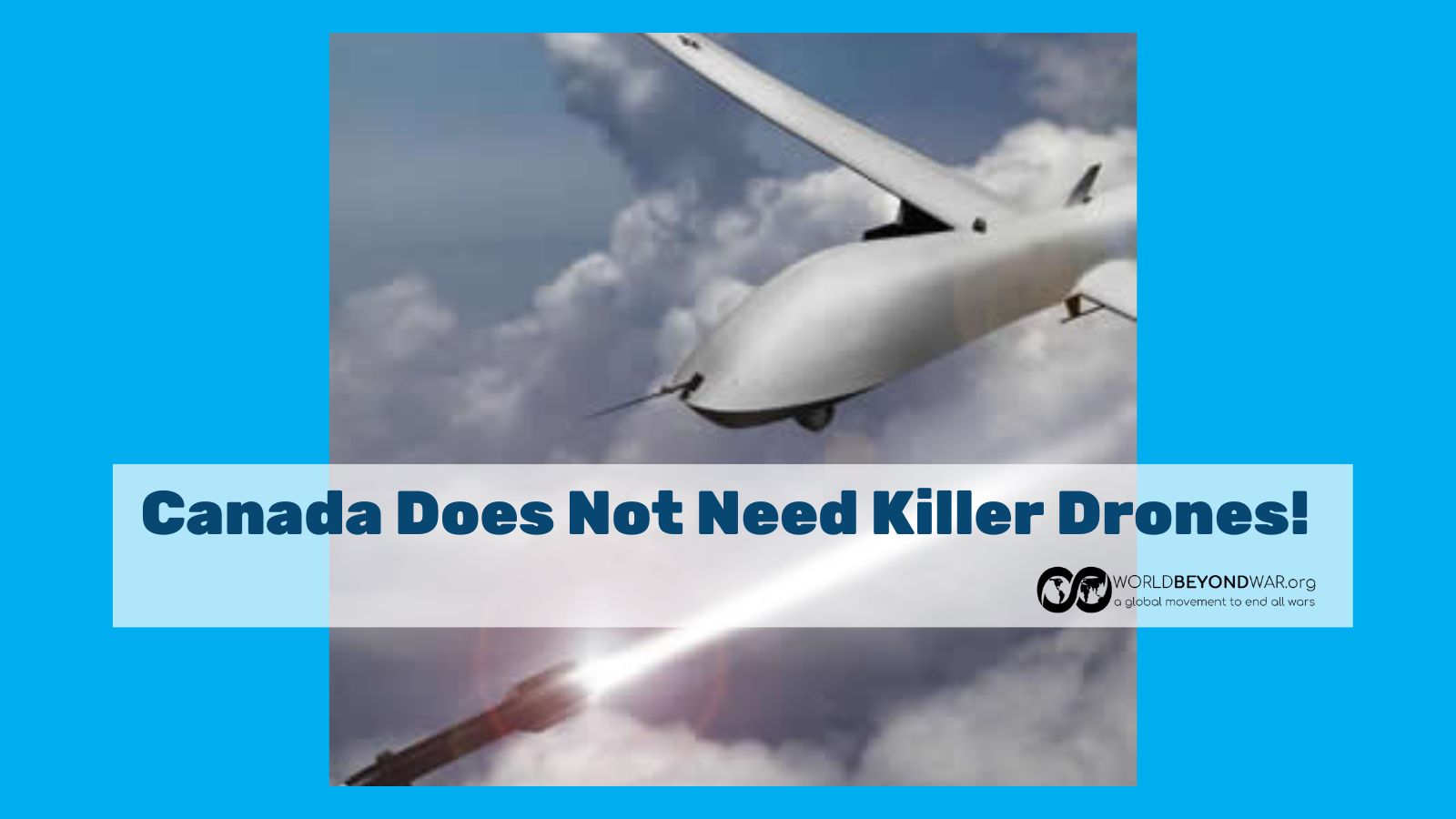 By Maya Garfinkel and Yiru Chen, World BEYOND War, January 25, 2023

War profiteers have a vice grip on Canada. After nearly 20 years of delays and controversy surrounding whether Canada should buy armed drones for the first time, Canada announced in the fall of 2022 that it would open bidding to weapons manufacturers for up to $5 billion worth of armed military drones. Canada has justified this exorbitant and dangerous proposal under the typical guise of supposed security. However, upon closer inspection, Canada’s reasons for the proposal cannot justify spending $5 billion on new killing machines.

The Department of National Defence has stated that “while the [drone] will be a medium-altitude long-endurance system with a precision strike capability, it will only be armed when necessary for the assigned task.” The government’s letter of interest goes on to detail  the potential uses of armed drones. These “assigned tasks” are worth a second glance. For example, the document  introduces an imaginary strike sortie scenario. The “Unmanned Aircraft Systems” are used to conduct patterns of “life assessments” at several “suspected insurgent operating locations,” survey routes for “coalition convoys,” and provide “surveillance.” In plainspeak, this means civilians’ privacy is potentially at risk. The drones are also tasked to carry AGM114 Hellfire Missiles and two 250 lbs GBU 48 laser guided bombs. This reminds us of the numerous reports of U.S. troops mistakenly killing civilians in Afghanistan simply because they made the wrong call based on footage sent from drones.

The Canadian government has released plans to use armed drones for the National Aerial Surveillance Program to detect marine activity in the Canadian Arctic and protect endangered species and the marine environment. However, there is no direct evidence of a need for armed drones for this program, as non-military drones are sufficient for the surveillance role. Why is the Canadian government emphasizing the importance of armed drones to the Canadian Arctic? We can guess that this purchase is less about the need for regulation and exploration and more about contributing to an already escalated arms race. Moreover, the use of armed or unarmed drones in Canada’s North is more likely to harm Indigenous peoples than to monitor Arctic marine activities. Because of the drone bases in Yellowknife, located in Chief Drygeese territory on the traditional land of the Yellowknives Dene First Nation, armed drone activities are almost certain to heighten privacy and safety violations against Indigenous people.

The supposed benefits to the public of buying armed unmanned aircrafts are murky.  While the demand for new pilots could provide some jobs, as could constructing an armed drone base, the number of jobs created is quite small compared to the number of unemployed Canadians at large. Royal Canadian Air Force Commander Lt.-Gen. Al Meinzinger said the entire drone force would include about 300 service members, including technicians, pilots, and other personnel from the Air Force and other military bases. Compared to the $5 billion in spending for the initial purchase alone, the 300 jobs clearly don’t contribute enough to the Canadian economy to justify buying armed drones.

After all, what is $5 billion, really? The figure of $5 billion is difficult to grasp compared to $5 thousand and $5 hundred. To contextualize the figure, the annual expenditures for the entire Office of the United Nations High Commissioner for Refugees have hovered around $3 – $4 billion in recent years. This is the total annual cost of operating a UN agency that serves nearly 70 million people worldwide who have been forced to leave their homes. What’s more, British Columbia provides houseless people with $600 per month in rental assistance, and comprehensive health and social support that can help more than 3,000 low-income people of BC acquire housing in the private market. Suppose the Canadian government spent $5 billion helping the homeless instead of quietly hoarding arms. In that case, it could help at least 694,444 people facing housing precarity in just one year.

While the Canadian government has given many reasons for buying armed drones, what is really behind all of this? As of November 2022, two weapons manufacturers are in the final stages of the competition: L3 Technologies MAS Inc. and General Atomics Aeronautical Systems Inc.  Both have sent lobbyists to lobby the Department of  National Defence (DND), Prime Minister’s Office (PMO), and other federal departments many times since 2012. Furthermore, the Canada Public Pension plan also invested in L-3 and 8 top weapons companies. Consequently, Canadians are deeply invested in war and state violence. In other words, we are paying for the war while these companies profit from it. Is this who we want to be? It’s imperative that Canadians speak out against this drone purchase.

The Canadian government’s reasons for buying armed drones are clearly not good enough, as it provides limited employment opportunities and the limited help to national defense does not justify the $5 billion dollars price tag. And the constant lobbying of Canada by the weapons suppliers, and their involvement in the war, makes us wonder about who is really winning if this armed drone purchase continues. Whether for the sake of peace, or even just a concern for the proper use of Canadian residents’ tax dollars, Canadians should be concerned about how this $5 billion in so-called defense spending will affect us all.