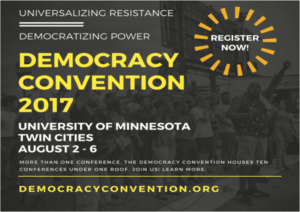 Democracy Convention is a multi-issue convention seeking to build a more unified movement. World Beyond War is organizing the Peace and Democracy Conference portion of it, which will run along with 9 other conferences August 2-6, 2017.

Endorsed by Minnesota Alliance of Peacemakers.
And Women Against Military Madness.

August 2, 2:00 – 3:15 p.m.: Do People Want Peace? The State of Public Opinion, the Peace Movement, and Governance.
A discussion of what war and peace would look like if we had democracy. What do people want? How do we advance those goals?
Leah Bolger, Norman Solomon, .
Moderator: David Swanson

August 2, 3:30 – 4:45 p.m.: Peace Media.
How does corporate media advance militarism? What does peace media look like? How do we see through the former and support the latter?
Bob Koehler, Michael Albert.
Moderator: Mary Dean

August 3, 10:30 – 11:45 a.m.: The Case for War Abolition. Why We Can and Must End Our Greatest Crime.
Why build a movement with the goal of eliminating wars and militaries? What does such a movement look like?
David Swanson, Medea Benjamin.
Moderator: Pat Elder

August 3, 1:00 – 2:15 p.m.: Replacing War Systems with Peace Systems.
What institutions must replace or evolve out of the current ones to prevent the continued use of war? What do we replace war with in foreign affairs?
Kent Shifferd, Tony Jenkins, Jack Nelson-Pallmeyer, Marna Anderson.
Moderator: Tony Jenkins

August 3, 2:30 – 3:45 p.m.: Peacenvironmentalism. One movement, Indivisible.
What should connect the peace and environmentalist movements? How can we better connect them?
George Martin, Kent Shifferd.
Moderator: Ellen Thomas

August 3, 4:00 – 5:15 p.m.: Overcoming Racism, Militarism, and the Militarized Police
How can we more effectively take on the interlocking evils of racism, militarism, and a militarized society?
Monique Salhab, ,  Nekima Levy-Pounds.
Moderator: Pat Elder

August 3, 7:00 – 7:30 p.m.: Hole in the Ground, Dramatic Reading.
Reading of a powerful piece of poetry: Hole in the Ground: A parable for peacemakers, by Daniel Berrigan.
Tim “Brother Timothy” Frantzich.
Moderator: Coleen Rowley

August 4, 9:00 – 10:15 a.m.: Divestment from Weapons Dealers.
How have other divestment campaigns succeeded? How can divestment from all weapons of war be advanced?
David Smith, Tom Bottolene, Pepperwolf.
Moderator: Mary Dean

August 4, 10:30 – 11:45 a.m.: Counter-Recruitment: Lack of Rights Within the U.S. Military
How can we counter military recruitment? What is the reality you face if you join the U.S. military?
Pat Elder, , Dick Foley, Kathy Kelly.
Moderator: Leah Bolger

August 4, 2:30 – 3:45 p.m.: Building Alliances Across Borders.
How can groups based in different parts of the world collectively form a global movement?
Kathy Kelly plus live Skype to Afghanistan, plus recorded videos from abroad.
Moderator: Pat Elder

August 4, 4:00 – 5:15 p.m.: Nonviolence Training.
This is a training, not a discussion about training. Show up and get trained.
Trainers: Mary Dean, Kathy Kelly.

August 5, 8:30 – 9:30 a.m., off-site: Flyering and talking about Frank Kellogg on Kellogg Blvd, and at nearby farmers’ market in St. Paul.
Frank Kellogg of St. Paul, Minn., was awarded the Nobel Peace Prize for his role in the creation of a treaty still on the books that bans all war. Nobody who walks along a major street named for him has ever heard of him or that treaty. Let’s change that.

August 5, 1:00 – 2:15 p.m.: Ending the Nuclear Nightmare.
What is the risk? What is being done about it? What can be done further?
Marie Braun, Ellen Thomas, Bonnie Urfer.
Moderator:   David Swanson

August 5, 2:30 – 3:45 p.m.: Peace Education.
How are we educated to accept war? How could we be educated to create peace? How can peace academia join peace activism in taking on the greatest purveyor of violence on earth and one of the greatest funders of U.S. universities: the U.S. military?
Tony Jenkins, Karin Aguilar-San Juan, Amy C. Finnegan.
Moderator: Tony Jenkins

August 5, 4:00 – 5:15 p.m.: Law vs. War and Global Governance Beyond Nations.
What is the past and future of U.S. and world law on war? We will look in particular at the Kellogg-Briand Pact and the U.S. Constitution.
David Swanson, Ben Manski, Scott Shapiro.
Moderator: Leah Bolger

August 5, 6:00 p.m., off-site,  Commemorative Tea Ceremony at Lyndale Park Peace Garden (4124 Roseway Road, Minneapolis 55419; across from the Rose Garden near Lake Harriet). A meditative beginning to the August atomic bombing commemoration events. The ceremony, led by Yukimakai Tea Study Group, involves the tea master and assistant brewing and serving special matcha green tea to two selected guests. It is a very quiet ceremony. Everyone sits on blankets or lawn chairs (bring your own). The ceremony itself lasts less than a half hour. We begin with meditative music, this year on the violin. The event is free and open to the public. It takes place near the Peace Garden Bridge at the same time that people in Hiroshima are gathering at their peace park.

August 6, 7:30 – 8:30 a.m.,  off site, Hiroshima-Nagasaki Commemoration at Peace Garden at Lake Harriet (see above)This remembrance of the bombing of Hiroshima and Nagasaki has taken place at the Peace Garden since 1985.  It climaxes with a moment of silence at 8:15 a.m. when the Hiroshima bomb was dropped.  It begins with singing, welcome, telling the story of Sadako and the 1000 cranes, Veterans for Peace ring bells, and guest speaker, David Swanson this year. Our theme this year is disarmament, building on the UN resolution. After the moment of silence, everyone receives a paper crane to put on a tree.  This year we will also have a ‘haiku walk’ where people can walk from station to station and read haiku about war and peace.  The program begins at the Spirit of Peace sculpture in the Peace Garden and proceeds to the Peace Garden Bridge. These events are sponsored by the Minneapolis St. Paul Hiroshima Nagasaki Commemoration Committee which offers these events to the community to encourage reflection on the past and hope for the future through action in the present.  It calls for the total abolition of nuclear weapons throughout the world as one measure of ensuring a just and lasting peace.  There is also a Nagasaki Commemoration event on August 8 in the evening in St. Paul.

How to get to the Hiroshima-Nagasaki Commemoration: Hopefully there will be enough cars to get people to and from the Sunday, August 6, 7:30 a.m. Hiroshima Remembrance at the Peace Garden. If not, here’s how to get there by public transit, even early on a weekend morning when the schedules show no mercy. From Blegen Hall, walk north on 19th Ave., about a block, to WEST BANK STATION to catch the 6:37 train to Mpls. Walk down the stairs and buy a regular fare for $1.75, or $.75 if over 65.  These are machines that give change, but you might have to show a Medicare card on the train (rare).  I would recommend getting to the station at least by 6:30 so you have time to fool with the machine. Take the train to WAREHOUSE DISTRICT/HENNEPIN AVENUE stop and walk back (opposite from train direction) to Hennepin Avenue and turn right to the bus stop in front of the Cowles Center. Catch the 6:54 #4 bus (a couple minutes later than that). The ticket you bought for the train will be your transfer to get on the bus. Take the 4 bus to 40th St. Get off and walk straight ahead a little more than a block and angle left onto Roseway Road, where you will see PEACE CAIRNS and soon the Statue and Circle of Stones where the ceremony is held.