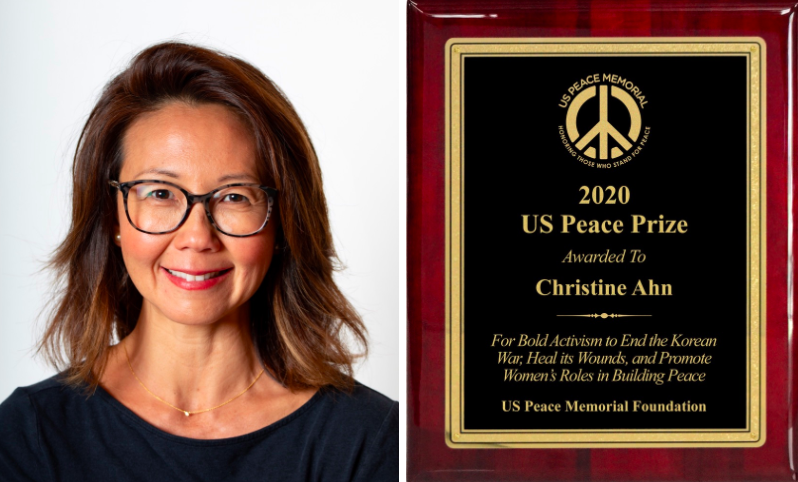 The 2020 US Peace Prize has been awarded to the Honorable Christine Ahn, “for bold activism to end the Korean War, heal its wounds, and promote women’s roles in building peace.”

Michael Knox, Chair of the Foundation, thanked Christine for her “outstanding leadership and activism to end the Korean War and halt militarism on the Korean Peninsula. We applaud your tireless work to involve more women in peace building. Your efforts over the last two decades are greatly appreciated in the U.S. and around the world. Thank you for your service.”

In response to her selection, Ms. Ahn commented, “On behalf of Women Cross DMZ and all the courageous women who are working to end the Korean War, thank you for this tremendous honor. It is especially significant to receive this award in the 70th anniversary of the Korean War — a war that claimed four million lives, destroyed 80 percent of North Korean cities, separated millions of Korean families, and still divides the Korean people by the De-militarized Zone (DMZ), which in reality is among the most militarized borders in the world.

Sadly, the Korean War is known as the ‘Forgotten War’ in the United States, even though it continues to this day. That’s because the U.S. government refuses to negotiate a peace agreement with North Korea while continuing to wage a brutal war of sanctions against innocent North Korean people and impede reconciliation between the two Koreas. Not only is the Korean War the longest standing overseas U.S. conflict, it is the war that inaugurated the U.S. military industrial complex and put the United States on the path to become the world’s military police.”

Read her full remarks and see photos and more details at: www.USPeacePrize.org. You are invited to attend a virtual event on November 11 with Medea Benjamin and Gloria Steinem celebrating Ms. Ahn and her work with Women Cross DMZ.

Thank you very much for your support.

Lucy, Medea, Margaret, Jolyon, and Michael
Board of Directors