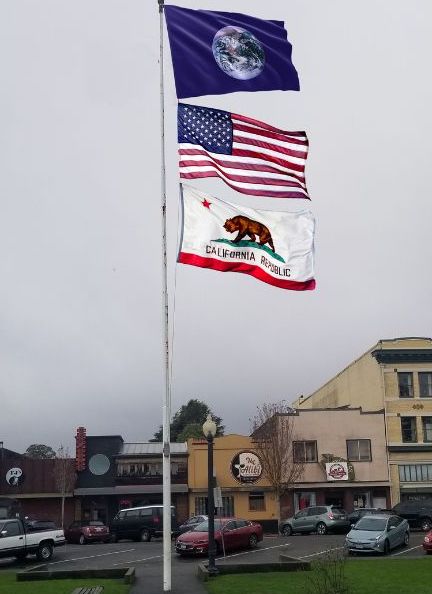 The people of the City of Arcata do ordain as follows:

It shall be the official policy of the City of Arcata to fly the Earth flag at the top of all city-owned flagpoles, above the flag of the United States of America and the California flag, and any other flags that the city may choose to display.

For the purpose of this measure, the Earth Flag shall be defined as the flag featuring the “Blue Marble” image of the Earth, photographed from the Apollo 17 spacecraft, in 1972.

The initiative qualified for the ballot in May, when volunteers successfully gathered 1381 valid signatures on petitions. On December 6, Humboldt County Elections posted their Final Election Results, showing that Measure M had passed, supported by 52.3% of Arcata voters.

Proponents of the measure state:

Some have argued that the United States and California flag codes require the U.S. flag to be flown at the top. While flag codes do place the U.S. flag above, there is no legal history of their enforcement, and the federal flag code is broadly recognized as only advisory, even by the American Legion.

When enacted, the measure might be legally challenged. If so, the City Council decides whether to defend it in court. Proponents would encourage them to do so, and will offer free legal representation.

Some may think that flying anything above the Stars and Stripes is unpatriotic or disrespectful. Measure “M” intends no such disrespect. One can still believe that America is the “greatest nation on Earth.” The emphasis of that phrase just moves to “on Earth.”

Humboldt County’s Chapter 56 of Veterans for Peace endorsed the measure, as did the Humboldt Progressive Democrats.

The “Blue Marble” Earth flag image was taken on December 7, 1972, by the Apollo 17 spacecraft crew, and is among the most reproduced images in history, celebrating its 50th anniversary tomorrow.

Put the Earth on top!