A Memorial to oppose war by promoting peace 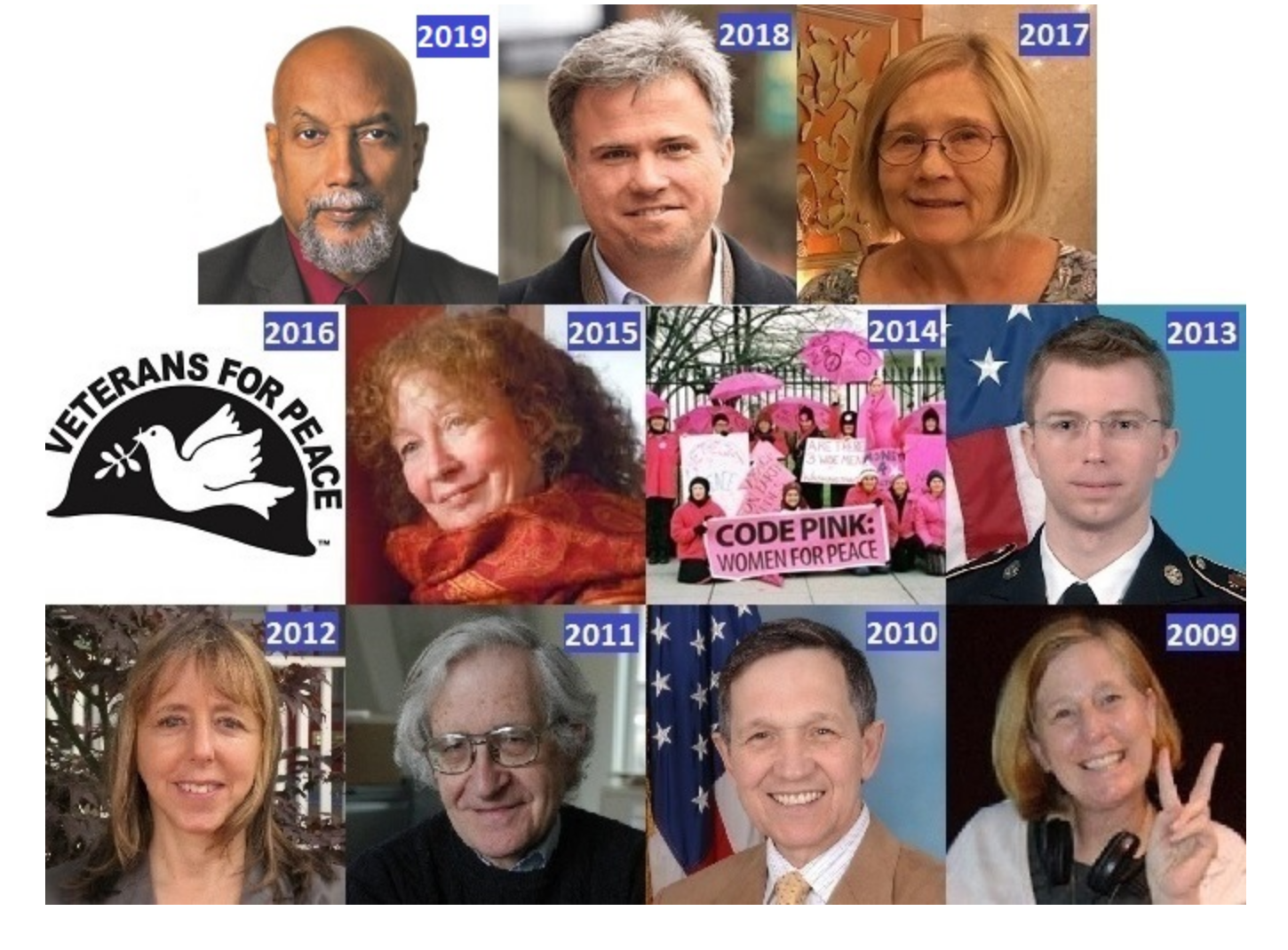 In the midst of warfighting by U.S. troops in Afghanistan and Iraq, Dissent magazine once featured an article with the headline “Why Is There No Antiwar Movement?” The writer, Michael Kazin, said at one point, “Two of the longest wars in American history entirely lack the kind of organized, sustained opposition that emerged during nearly every other major armed conflict the United States has fought over the past two centuries.”

Similarly, Allegra Harpootlian, writing for The Nation in 2019, noted that Americans took to the streets in 2017 to protest their rights being endangered by the election and inauguration of Donald Trump, but “Conspicuously absent from the newfound civic engagement, despite more than a decade and a half of this country’s fruitless, destructive wars…was anti-war sentiment.”

“You might look at the lack of public outrage,” wrote Harpootlian, “and think an anti-war movement doesn’t exist.”

Harpootlian said some observers attributed this absence of antiwar activity to a sense of futility that Congress will ever seriously consider the views of antiwar constituents, or a general apathy on matters of war and peace when compared to issues like health care, gun control, other social issues, and even climate change. Others have speculated that additional reasons for apparent indifference could be today’s professional all-volunteer military that leaves other citizens’ lives untouched and an increased level of secrecy in the intelligence and military apparatus that keeps citizens more in the dark about armed forces ventures as compared to earlier times.

Knox is on a mission to rectify that. He has created tools to bring about that recognition publicly. They are components of a larger project that includes the ambitious goal of building a physical US Peace Memorial, ideally in the nation’s capital, to honor and celebrate antiwar activists, comparable to the way so many existing memorials do the same for various wars in American history and their adulated heroes. More on this shortly.

Knox explains the basic philosophy and rationale of his effort this way.

“In Washington, DC, viewing the Vietnam Veterans Memorial, the Korean War Veterans Memorial, and the National World War II Memorial leads one inescapably to conclude that war efforts or activities are highly valued and rewarded by our society. But there are no national monuments here to convey a message that our society also values peace and recognizes those who take action to oppose one or more U.S. wars. There is no public validation of antiwar activities and no memorial to serve as a catalyst for discussion regarding courageous peace efforts by Americans over the past centuries.

“Our society should be as proud of those who strive for alternatives to war as it is of those who fight wars. Demonstrating this national pride in some tangible way may encourage others to explore peace advocacy during times when only the voices of war are being heard.

“While the horror and tragedy that mark war are not usually components of working for peace, nonetheless as with war, peace advocacy includes dedication to cause, bravery, serving honorably, and making personal sacrifices, such as being shunned and vilified, putting oneself ‘on the line’ in communities and in society, and even being arrested and jailed for antiwar actions. So without taking anything away from those who fight wars, a Peace Memorial is a way to achieve balance for those who work for peace instead. The honor that antiwar activists merit—and a healthy respect for peacemaking efforts—are long overdue.”

Knox acknowledges that war has historically featured both personal and collective acts of valor and sacrifice amidst hellish violence and tragedy. So it is understandable that memorials are erected to acknowledge war’s momentous impacts and honor the participants’ dedication to causes that were deemed to be in our national interests. “These memorials recognize the horrific, deadly, and often heroic realities of war, which creates the kind of visceral and emotional foundation on which war memorials are instinctively built,” Knox said.

“By contrast, Americans who oppose war and who advocate instead for alternate, nonviolent solutions to conflict can and do at times help to prevent or end wars, thereby averting or lessening their scope of death and destruction. It could be said war dissenters engage in prevention, creating life-saving results, outcomes that are far less ghastly than what war wreaks. But these preventatives do not have war’s emotionally evocative power, so it’s understandable the instinct for a memorial to peacemaking is not as strong. But recognition is validly due nonetheless. A similar dynamic happens in healthcare where disease prevention, which saves many more lives, is poorly funded and often unrecognized, whereas revolutionary medicines and dramatic surgeries that have life-saving impacts on people and their families are often duly celebrated as heroic. But don’t those preventions actually have dramatic results also? Don’t they deserve accolades as well?”

He concludes: “In a culture that funds and esteems warmaking, the overdue respect for peacemaking must be taught and modeled. A national monument to peacemakers can help do that. It can change our cultural mindset so that it will no longer be acceptable to label those who speak out against a U.S. war as un-American, antimilitary, disloyal, or unpatriotic.  Rather they will be recognized for their dedication to a noble cause.”

So how is Knox going about his peace-recognition pursuits? He organized the US Peace Memorial Foundation (USPMF) in 2005 as an umbrella for his work. He has devoted himself full-time to it since 2011 as one of 12 volunteers. The Foundation engages in research, education and fundraising on an ongoing basis, with the goal of remembering and honoring the millions of U.S. citizens/residents who have advocated for peace through writing, speaking, protests, and other nonviolent actions. The aim is to identify role models for peace that not only honor the past but also inspire new generations to work to end war and demonstrate that the United States values peace and nonviolence.

The USPMF encompasses three distinct operational components. They are:

The Foundation has set four interim benchmark goals and is slowly making progress on them. They are as follows:

An antiwar movement for the 21st century

To the query suggested at the opening of this article—Is there still an antiwar movement in America?—Knox would answer that Yes, there is, though it could be made much stronger. “One of the most effective ‘antiwar’ strategies,” Knox believes, “is to more formally and visibly exhibit and esteem ‘pro-peace’ activism. Because by recognizing and honoring peace advocacy, antiwar activism becomes that much more accepted, reinforced, and respected and more energetically engaged in.”

But Knox would be the first to acknowledge that the challenge is daunting.

“War is a part of our culture,” he said. “Since our founding in 1776, the U.S. has been at peace for only 21 of our 244 years. We’ve not been through a single decade without waging some kind of war somewhere. And since 1946, after World War II, no other country has killed and injured more people living outside its borders, a span during which the U.S. had dropped bombs on more than 25 countries—including a total of more than 26,000 bombs in just one recent year. In the past decade our wars have routinely killed innocents, including children, in seven predominantly Muslim nations.” He believes that the numbers alone should be reason enough to give greater recognition to peacemaking action and the necessary counterbalancing it offers.

Knox says antiwar advocacy must also confront a reflexive “pro-war” instinct that marks our culture. “Just by joining the armed forces,” he noted, “one is automatically bestowed with a position of respect and honor no matter who they are or what they have, or have not, done. Many officials running for election cite their military background as a qualification for holding a leadership position. Non-veterans often have to defend their patriotism and provide a rationale for why they did not serve in the military, the implication being that one cannot be seen as sufficiently patriotic without a military record.”

“The other pivotal cultural issue is that overall awareness of our warmaking impacts is deficient. We rarely learn about the imperialism, militarism, and in some cases genocide that accompanies our war activity. When military successes are reported, we likely do not hear about the accompanying negative carnage, such as cities and vital resources laid waste, innocent inhabitants turned into desperate refugees, or civilians and children killed and maimed in what is almost guiltlessly called collateral damage.

“Also our own U.S. children are not taught to contemplate or debate these devastating impacts or consider potential alternatives to war. There is nothing in middle or high school textbooks about the peace movement nor the countless numbers of Americans who have demonstrated against military interventions and bravely engaged in peace advocacy.”

Knox insists we nonetheless have the power to take action and bring about change. “It’s a matter of changing our culture so that more citizens feel comfortable speaking out. We can encourage peacemaking behavior, identify role models to emulate, reduce negative reactions to peace advocacy and replace that with positive reinforcement. Although we would never denigrate anyone who has defended our borders and homes from a foreign military invasion, we must ask ourselves the question: Isn’t it just as patriotic, even imperative, for Americans to take a stand for peace and advocate for the end of wars?”

“Affirming that brand of patriotism by honoring peace advocacy,” says Knox, “is one of the key missions of the US Peace Memorial Foundation.”

Want to help the US Peace Memorial Foundation?

The US Peace Memorial Foundation needs and welcomes many types of support. Monetary donations (tax deductible). Suggestions for new enrollees in the US Peace Registry. Advocates for the Memorial project. Researchers. Reviewers and editors. Scheduling speaking opportunities for Dr. Knox. Supporters understandably are not compensated financially for their help, but the Foundation offers various methods to recognize contributions of funds, time, and energy they give to the project.

For more information on how to help, visit www.uspeacememorial.org and choose the Volunteer or Donate options. Additional detailed information on the US Peace Memorial project is also available at this site.

Ken Burrows is a retired journalist and currently a freelance columnist. He was a conscientious objector in the early 70s, a volunteer draft counselor, and has been an active member of various antiwar and social justice organizations.