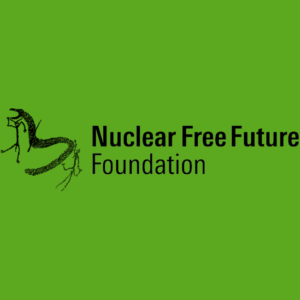 The Nuclear Free Future Foundation, based in Munich, Germany, has announced the 2020 winners of the Nuclear Free Future Award. The annual awards are presented to honor the largely unsung heroes of the worldwide anti-nuclear movement for the work they do to end both the military and civilian use of nuclear energy. An international jury of activists and scientists selects the winners in the categories of Resistance, Education and Solution.
The 2020 recipients are: American coordinators of the Nuclear Resister, Felice and Jack Cohen-Joppa, in the Education category; Canadian peace activist and feminist Ray Acheson in the Solution category, and journalist Fedor Maryasov and attorney Andrey Talevin from Russia in the Resistance category. Each of the three awards includes a prize of $5,000. The Foundation also presented an honorary Special Recognition to Native American activist and U.S. Representative Deb Haaland (Democrat, New Mexico).
Jack and Felice Cohen-Joppa received the award for their “decades-long work supporting anti-nuclear resisters in prison and keeping their messages alive on the outside.”
Beginning in 1980 under the mantel of their newsletter and organization, The Nuclear Resister, the couple have provided comprehensive reporting on thousands of arrests of anti-nuclear activists, publicizing and supporting those subsequently jailed for their actions. In 1990, they expanded their work to include reporting on anti-war resisters, with the same emphasis on prisoner support. Over the past 40 years, the Nuclear Resister has chronicled more than 100,000 anti-nuclear and anti-war arrests around the world, while encouraging support for more than 1,000 jailed activists.

“The words of resisters and accounts of their actions do a great deal in encouraging others to strengthen their own commitment,” said Felice Cohen-Joppa. “We remember with gratitude all of the people who have received the Nuclear Free Future Award in past years and are honored to join the list of recipients.”

Ray Acheson is director of Reaching Critical Will, the disarmament program of the oldest women’s peace organization in the world, the Women’s International League for Peace and Freedom. A focus of her activities and research is on the war economy and the patriarchal and racist structures of war and armed violence. Acheson has been working on the intergovernmental disarmament process since 2005 and was an instrumental voice for feminism in the campaign to secure the U.N. Treaty on the Prohibition of Nuclear Weapons, now nearing the 50 ratifications needed to see it become international law.
“The Nuclear Free Future Award is meaningful not just in its recognition of the work of individuals around the world, but in honoring the collective and intergenerational spirit of anti-nuclear activism,” said Acheson on learning of her win. “It’s an honor to be included among those who have resisted the bomb and all of its various violences, and to hopefully pass some of that spirit along to those who will continue this work until nuclear weapons are abolished for all time.”
The activities of Fedor Maryasov as a journalist and Andrey Talevlin as a lawyer have led to harassment and being labeled as “extremists” and a “foreign agent” by the Russian government.

Maryasov has published more than one hundred investigative articles on accidents, leaks, and waste scandals within the Russian nuclear sector.  He made public the secret plans of the state-owned nuclear company Rosatom to build an underground repository for nuclear waste in Zheleznogorsk, a closed nuclear city in Siberia.Talevlin has represented Russian NGOs in court on several occasions. In 2002, on his initiative, the Russian Supreme Court revoked the import permit for 370 tons of nuclear waste from the Pak nuclear power plant in Hungary. Talevlin has organized and participated in nonviolent actions against the import and reprocessing of spent nuclear fuel at the Mayak reprocessing facility and was arrested several times for these actions.

Deb Haaland, a Native American from Acoma Pueblo, was elected to the U.S. House of Representatives in 2018. She is helping to lead efforts in Congress to get the Radiation Exposure Compensation Act (RECA) expanded to include uranium miners who were working after 1971, as well as the Trinity Downwinders, exposed during the world’s first nuclear test on July 16, 1945 near Alamogordo, New Mexico.

Due to to the COVID-19 pandemic, the Nuclear Free Future Award will be presented this year in the form of an online dossier. Detailed information about this year’s and past prizewinners can be found on the NFFA website. Webinars with the prize winners will also be offered in the coming months.