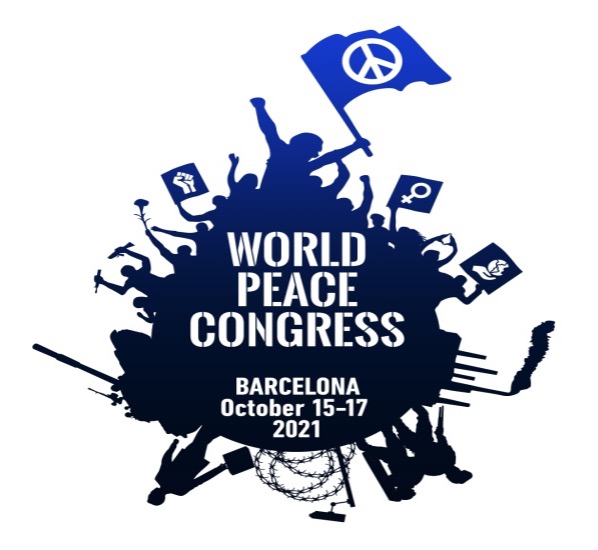 I recently attended The World Peace Congress organised by the International Peace Bureau (IPB) and the International Catalan Institute for Peace (ICIP) in Barcelona on 15-17 October which involved three days of conferences, workshops, and cultural events. The IPB is probably the longest surviving international peace organisation in the world, founded in 1891-92 as a result of discussions at the Universal Peace Congresses as one of the only international peace organisations in the late 19th century. The organisation is dedicated to the vision of a world without war and its main focus is on disarmament for sustainable development and the reallocation of military expenditure. Its last world congress, which I also attended, took place in Berlin in 2016.

Under the title “(Re)imagine the world. Action for peace and justice”, more than 2,500 people took part in this hybrid congress, with activities in Barcelona. The events took place in the Centre of Contemporary Culture (CCCB) and the Blanquerna – Universitat Ramon Llull, and were broadcast on the Internet 1,000 people attended to the congress in person, while 1,500 attended online. Participants came from 126 countries. In Barcelona, activists from 75 countries including South Korea, the United States, Afghanistan, India and Mongolia, were also able to listen to the speeches covering issues such as nuclear disarmament, climate justice, racism and the rights of indigenous peoples.

The Congress started on Friday 15 October with an event attended by the President of the Generalitat Pere Aragonés and the Mayor of Barcelona, Ada Colau. The opening session included speakers such as British politician Jeremy Corbyn,  ICAN Executive Director Beatrice Fihn, Lisa Clark, IPB co-president, and Jordi Calvo, IPB Vice-President and member of the local Barcelona committee. In later plenaries there were live inputs from inspirational activists such as Reiner Braun (IPB), Malalai Joya (Afghanistan), Binalakshmi Nepram (India), Shirine Jurdi (WILF Lebannon), Alexsey Gromyko (Russia)  and many others. Video messages from key figures such as Vandana Shiva, Noam Chomsky and Luiz Ignacio Lula da Silva and many more were also relayed. The messages coming through were diverse, but the demand for justice was always at  the forefront in creating new paths to sustainable peace and the need for strategic co-operation to achieve this.

Every year IPB presents the Sean McBride Peace Prize to an individual who has made a real contribution to peace, disarmament and/or human rights. This year’s award was presented at an event on the second day of the Congress to Black Lives Matter, recognized by the IPB Steering Committee for the movement’s dedication and work to create a world where Black lives can thrive.  Rev. Karlene Griffiths Sekou, community minister, scholar and activist and Director of Healing Justice and International Organizing, received the award as a  representative of of the social movement.

Apart from the plenary sessions there were a wide range of workshops and the choice was often a difficult one. I attended the following workshops where there was an opportunity to go deeper into the themes of the Congress through organisations involved in research, activism and surfacing issues that are so crucial. These offered presentations and the chance to get involved in smaller group discussions. This is just a flavour of some of the themes that were in focus.

The conference ended with an appeal from Barcelona to the world to ‘Re-imagine our world and take action for peace, justice and the climate declaring : ‘We appeal to the worlds politicians everywhere- give up old patterns of thinking and dependencies. Act now, with urgency and more comprehensively than before for peace, disarmament, justice and the climate. We will build pressure. Our actions will be decisive’. There was also an ‘Indigenous Peoples’ Declaration which urged ‘ the removal of all military bases from indigenous lands, territories and resources and that ancestral lands that were taken from indigenous peoples be returned to traditional landowners’. The IPB Action Plan  2021-2023 was launched and is available on their website. www.ipb.org