Witness Out of Palestine 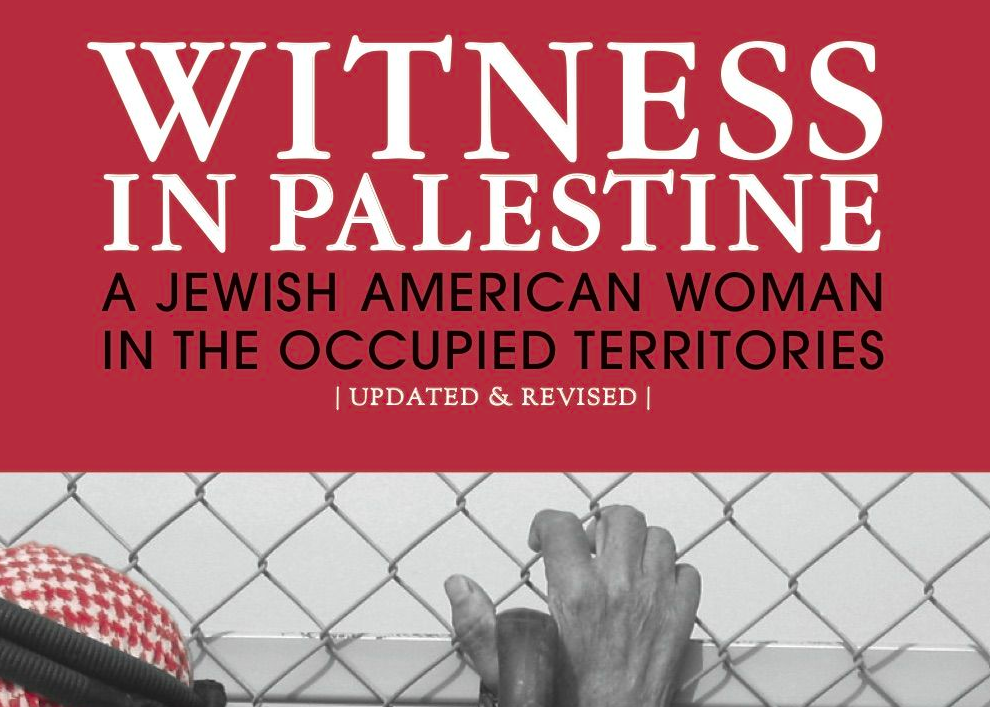 Anna Baltzer’s amazing book Witness in Palestine: A Jewish American Woman in the Occupied Territories has been updated over the years, and I’ve just read it for the first time. Rather unfairly, and — as it turns out — wrongly, my first response upon turning the initial pages was: Do we really need another one of these? Jewish person believes pile of myths. Jewish person confronts reality. Jewish person tries to open the eyes of others. It’s become as familiar as “Dog Bites Man.” Couldn’t we all just share one book around instead of everyone writing his or her own, and then pool our money until we can afford a television station so that people can be made to wake up in large numbers?

But here’s the thing. While I’ve grown accustomed to describing each such book as the best or one of the best, they are not all the same. One of the many merits of this one is that it would make — and I hope it does make if it isn’t already — an excellent text book in schools. And significant numbers of people are waking up, without television, and presumably in part because of all the books, plus the interviews and events that accompany the books. The movement in the U.S. against Israel’s wars (and occupations and apartheid) demonstrates to the movement against all wars, and that against U.S. wars, that such things are possible. It may also demonstrate to writers that their efforts are in fact worth a bit more than would be spending their time helping Fox News hosts spot hidden sperms in presidential portraits.

I recently debated a West Point professor on whether war can ever be justified, and I tried to get him to name some actual wars that have been justifiable (as opposed to theoretical wars). He claimed that Israel’s Six Days War was the “quintessentially” just war. So in our second debate, I read to him from a Los Angeles Times column by Miko Peled showing that those who launched that war did so because they saw an opportunity for aggression and conquest. The facts that Peled revealed would be spreading virally and becoming universally known if they proved that the United States was created by God to set an example for the dumber people of earth. Information becomes known if it is desirable. But why isn’t the fact that every single war ever has been unjustifiable very desirable news, as it allows the world to do something more useful with $2 trillion a year?

My debate partner was a man who took part in the U.S. wars on Iraq and Afghanistan but refused repeatedly to say whether they were just or unjust wars. During our second debate he said that only fresh recruits could be excused for refusing to participate in those wars, but that experienced trained soldiers should have known better. However, he said something seemingly at odds with that, when, after the debate, I asked him yet again whether Iraq 2003-on was a justifiable war, yes or no? He said that it was only unjustifiable after the fact because of new information. And yet he had publicly promoted and participated in that war long after any such supposedly new information (presumably meaning the absence of the WMDs) had become widely known and the fact that the lies had been intentional had been thoroughly documented, and those who had pointed out the blatant falsehoods beforehand had been proven right.

My confused debate partner much preferred talking about analogies to Good Samaritans and doctors and muggers than actual wars, so I pointed out to him that Israel’s concern in 1967 that in 18 months Egypt could be capable of attacking it actually bore no relevant similarity to the immediacy and the urgency of a victim of a mugging. In making this comment I also referred to “decades of genocidal occupation” that followed the war. Someone later accused me of misusing the term genocide. So I pointed out the open advocacy of genocide by top Israelis. Baltzer’s book points out the open advocacy of genocide by many (obviously not all) Israeli settlers and soldiers. But I was then told that the crime of “incitement of genocide” is not the same as genocide. So, apparently it is OK to accuse Israelis of “incitement of genocide” but not of doing anything genocidal. I have no idea Baltzer’s view and don’t want to overemphasize the silly question of the use of a particular word, but I recommend reading her book.

This book documents the normalization of a long-term gradual genocide, one that in its duration serves as a marketing device for generations of new military weaponry. Ambulances are stopped at checkpoints until the ailing person dies. Children are shot for straying too near a fence in pursuit of a soccer ball. Supplies are blocked. Malnutrition is intentionally and successfully imposed. Fishing is restricted. A village is flooded with raw sewage with five people drowning in it. These and hundreds of other techniques serve to reinforce the bigotry behind the apartheid, and to do something that is in a strange way worse than a faster genocide: the banalization of evil. Call it whatever the bloody hell you want to call it. But let’s not let the unpleasantness of it prevent us from working to make it stop.