Without A Super Spreader Event 102 Years Ago Today, WWII Might Not Have Happened 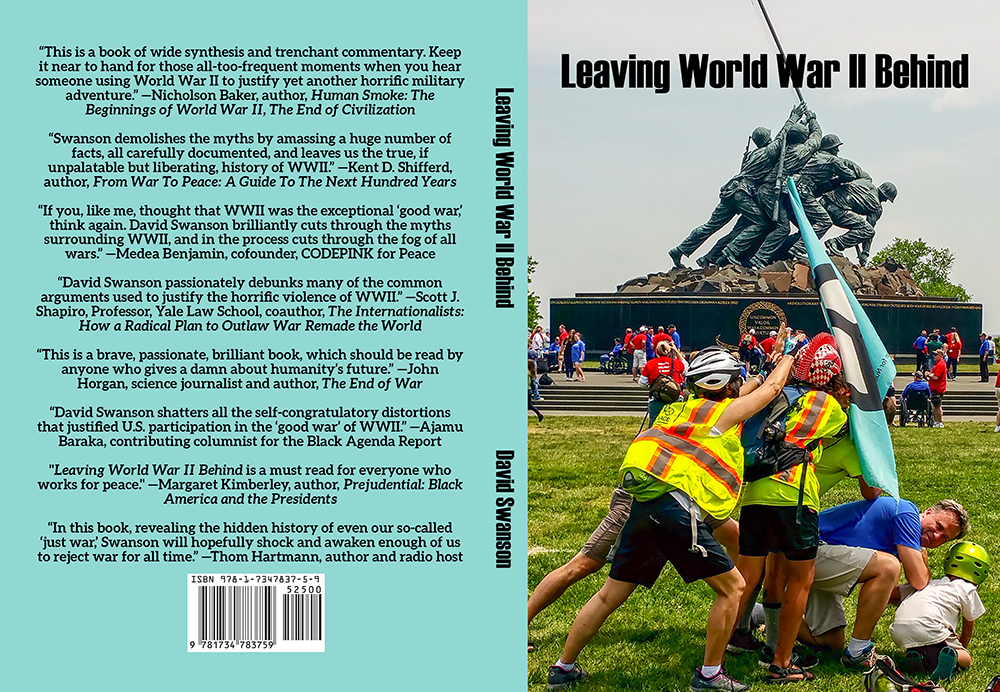 Excerpted and modified from Leaving World War II Behind

“One day President Roosevelt told me that he was asking publicly for suggestions about what the war should be called. I said at once, ‘The Unnecessary War.’ There never was a war more easy to stop than that which has just wrecked what was left of the world from the previous struggle.” —Winston Churchill[i]

I want to touch here on over two decades of completely unnecessary actions, inlcuding a particular event in Philadelphia in 1918. If we went back an additional 2 decades to the proposals for peace discussed at the Hague in 1899 but never acted upon, our case would be that much stronger.[ii] The point is not to pretend that the crisis of 1939 didn’t happen, but to become aware that governments could behave much less recklessly now, just as they could have in the lead-up to WWII.

Jane Addams and her colleagues not only predicted in 1919 that a second world war would come, but also detailed what would need to be changed about the Treaty of Versailles and the League of Nations in order to avoid it — and launched a global peace organization to advocate toward that end.[iii] The famous 14 points promoted by President Woodrow Wilson were largely lost in the Treaty of Versailles, replaced by brutal punishment and humiliation for Germany. Addams warned that this would lead to another war.[iv]

The British economist John Maynard Keynes wrote in 1919 in The Economic Consequences of the Peace, “If we aim deliberately at the impoverishment of Central Europe, vengeance, I dare predict, will not limp.”[v]

Thorstein Veblen, in a highly critical review of Keynes’ book, also predicted the Treaty of Versailles leading to more war, though he understood the basis of the treaty to be animosity toward the Soviet Union, against which, it should be noted, the United States and allied nations were fighting a war in 1919 that rarely shows up in U.S. history books.[vi] Veblen believed that reparations could have easily been taken from wealthy German property owners without imposing suffering on all of German society, but that the primary goal of those making the treaty had been to uphold property rights and to use Germany as a force against the communist Soviet Union.

Woodrow Wilson had promised “peace without victory,” but, in the treaty negotiations, given in to French and British vengeance toward Germany. Afterwards, he predicted World War II unless the United States joined the League of Nations.

Veblen thinks Wilson didn’t cave in and compromise at the treaty negotiations, but rather prioritized enmity toward the Soviet Union. I think the British did that, but that Wilson’s is a stranger story.

Wilson began by forcefully arguing against vindictive punishment of Germany, but was struck down by the so-called Spanish flu, was weakened severely, spoke as though delusional, and quickly agreed to abandon much of what he had promised the world.[vii] The Spanish flu (so called because, although it probably came from U.S. military bases to the European war, Spain allowed its newspapers to write about unpleasant news, a forbidden practice in nations at war) had infected the White House.[viii]

The previous fall, on September 28, 1918, Philadelphia had held a massive pro-war parade that included flu-infected troops just back from the war. Doctors had warned against it, but politicians had announced that nothing would go wrong if everyone refrained from coughing, sneezing, and spitting. They didn’t. The flu spread.[ix] Wilson got it. He didn’t do what he might have done in Paris. It’s not inconceivable that WWII could have been avoided had a parade in Philadelphia been avoided.

That may sound crazy, but the parade in Philadelphia was just one stupid thing in an ocean of stupid things that didn’t have to be done. Nobody could have predicted World War II as a result of that parade, but such a prediction was possible and in fact made about many other of the unnecessary and foolish actions in the years between the wars.

Ferdinand Foch, a Frenchman, was Supreme Allied Commander. He was very disappointed with the Treaty of Versailles. “This is not peace,” he supposedly exclaimed. “It is an armistice for 20 years.” World War II began 20 years and 65 days later. Foch’s concern was not that Germany was punished too severely. Foch wanted Germany’s territory limited on the west by the Rhine River.[x]

With widespread agreement that all governments would arm and prepare for more wars, predicting that Germany would be embittered by too much punishment or that too little punishment could allow Germany to launch a new attack were both safe predictions. With the ideas of prosperity without armament, the rule of law without violence, and humanity without tribalism still so marginal, Foch’s prediction made as much sense as Jane Addams’.

After WWII, Winston Churchill said, “Last time I saw it all coming and I cried aloud to my own fellow-countrymen and to the world, but no one paid any attention. . . .”[xi] Churchill meant that more armaments, more show of force, more threats and provocations could have prevented WWII, and that the same would prevent war with the Soviet Union. Churchill also put it this way:

“President Roosevelt one day asked what this War should be called. My answer was, ‘The Unnecessary War.’ If the United States had taken an active part in the League of Nations, and if the League of Nations had been prepared to use concerted force, even had it only been European force, to prevent the re-armament of Germany, there was no need for further serious bloodshed.”[xii]

Churchill goes on to describe not so much a stable peaceful world, as a delicate and increasingly dangerous imperial balance. There is no way to know that he’s mistaken. There was great opposition to Nazism in Germany, and some shift in history — whether a greater understanding of the tools of nonviolent action, or a more Churchillian militaristic resolve, or an assassination or coup (there were a number of failed plots) — might have defeated it.

But the point here is not that the world might have gotten lucky. Rather, the world acted foolishly, both by the standards of the time, and even more so by today’s. The Marshall Plan following WWII, for all its deep flaws, was an effort not to repeat the stupid way in which WWI had been ended. People were too much aware immediately after WWII of how they had created it after WWI.

In one week an online course begins on this topic.

[ii] When the Czar of Russia in 1898 invited all of the world’s governments to a peace conference, which would be held in the Hague in 1899, one leading peace advocate wrote to another that now, finally, “the world will not shriek Utopia!” meaning that peace would at last be taken seriously. Sadly, it was not. The major war-making governments shrieked “Utopia” at the top of their lungs. And well-meaning activists were divided between efforts to ban war and efforts to ban particular atrocities, thereby “humanizing” war. Nonetheless, a treaty was produced requiring nations to at least try to settle disputes through arbitration, and a court was created to arbitrate. Key ingredients for avoiding both world wars were placed on the world’s shelves and allowed to gather dust. See James Crossland, War, Law, and Humanity: The Campaign to Control Warfare, 1853-1914 (Bloomsbury Academic, 2019). See also “Convention (I) For The Pacific Settlement Of International Disputes (Hague I) (29 July 1899)” https://avalon.law.yale.edu/19th_century/hague01.asp

[vi] Thorstein Veblen, “Review   of   John   Maynard   Keynes, The   Economic Consequences of the Peace,” Political Science Quarterly, 35, pp. 467-472, http://www.adelinotorres.info/economia/THORSTEIN%20VEBLEN-Review%20of%20John%20Maynard%20Keynes.pdf Cited by Guido Giacomo Preparata, Conjuring Hitler: How Britain and America Made the Third Reich (Pluto Press, 2005), Chapter 2 “The Veblenian Prophecy. From the Councils to Versailles by Way of Russian Fratricide, 1919-20.”

[ix] Bob McGovern and John Kopp, Philly Voice, “In 1918, Philadelphia was in ‘the grippe’ of misery and suffering,” September 28, 2018, https://www.phillyvoice.com/1918-philadelphia-was-grippe-misery-and-suffering

[x] This quotation of Foch has been widely cited, including by Winston Churchill, though there are reasons to doubt that he said it on the date cited, if he said it at all. However, there is strong agreement that it encapsulates his sentiments at the time of the Treaty of Versailles. See Dr. Beachcombing, “Foch and the Twenty Year Armistice: A Myth?” July 11, 2016, http://www.strangehistory.net/2016/07/11/foch-twenty-year-armistice-myth