Will the Moon Rise in Korea? 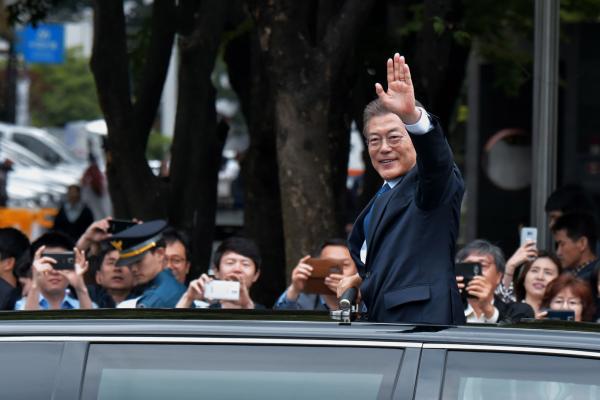 The recent big victory for South Korean President-elect Moon Jae-in has many people wondering what will happen next?

Will Moon force Trump to pull THAAD (Terminal High Altitude Area Defense) out of Seongju, the melon farming community which has now been turned into a US ‘missile defense’ (MD) base – and clearly a prime target in any war?  Will Moon reject Trump’s demand that South Korea pay for the THAAD deployment?

Will Moon work to relax tensions with North Korea and re-open the door to reunification on the Korean peninsula?  Will the Moon shine bright and demand that South Korea have its own military and foreign policy rather than serving as a military outpost and colony for the US empire?

Below I’ve posted some thoughts on these questions from long-time peace activist and international law professor Francis Boyle.

As a fellow human rights lawyer I have great respect for President Moon and his pronounced willingness to carry on the Sunshine Policy of his two Human Rights Law President Predecessors. But there is very little he can do about THAAD now. Trump rammed it in there before Moon’s  election precisely to pre-empt Moon from  taking any steps to stop THAAD.

In all honesty, with 28,000 US troops there, South Korea is basically under the de facto  military occupation by  the United States left over from the Korean War. The US put THAAD in there as part of their “pivot against China” that was started by Obama. It will really be up to Chinese President Xi to convince Trump to pull out THAAD—if that can be done.

Perhaps that objective can be accomplished as part of an overall deal among US-China-North Korea  for the denuclearization of DPRK. I am confident President Moon will do what he can to promote such a deal.

There is no doubt that Moon is much better than [the last two right-wing presidents] Lee Myung-bak or Park Geun-hye.

However, it was Kim Dae-jung (1998-2002) under whose term, the first Korean Aegis destroyer was planned and it was Roh Moo-hyun (2003-20007) under whose term the baptism on the first Korean Aegis destroyer Sejong, the Great, was made.  It was also under the Roh Moo-hyun government that the Jeju navy base project was actually carried out. Roh’s understanding with the Jeju navy base project was that it would strengthen self-reliant defense. I don’t think he so pushed the project. It was the deceased Park Chung-hee (the father of Park Geun-hye) government in 1960s who has conceived the idea to build a US base in Jeju. It was the military who established the plan to build a Jeju navy base in earnest in early 1990s. It was also the Jeju Island government then who sought for his own selfish interest with the introduction of the navy base in the Gangjeong village.

My point is none of the liberals such as Kim Dae-Jung, Roh Moo-hyun and probably Moon Jae-in, too, have been fully aware of the nature of MD. Or they have not been really free from the influence by corporations like Samsung and/or United States who would punish them for mere resistance. Therefore we should watch the liberals continuously, especially in relation to MD matters.

Another element that makes Moon’s term really difficult is of course, the push by the United States government who is really clear in its position to hand over financial burden to alliance countries by arms sales. Gen. Vincent Brooks, Commander of the United States Forces in Korea, has stated in his testimony to the US Senate Committee on April 19 that his next purpose after the THAAD is to sell more MD systems to South Korea. It brings direct interest to US economy, he said.

It means Moon will never be liberated from such push of MD arms sales throughout his term. Today, it is THAAD but tomorrow, more arms might be added to it, such as SM 3…

Since writing those words Sung-Hee sent additional information informing us that President Moon supports an increase in military spending, or bringing it close to 3 percent of South Korea’s gross domestic product. The new president’s policies could also pave the way for Seoul to acquire its own nuclear submarine.

In addition some expect that Moon may indeed be interested in the introduction of SM3 interceptor missiles on-board Korean Navy Aegis destroyers, namely the THAAD of sea….

So in the end South Korean peace activists can’t take a rest – they are going to have to keep the movement building going and pressure President Moon not to follow the dictates of the Pentagon to further militarize the Korean Peninsula.  Just goes to show that ‘liberals’ are not our saviours.