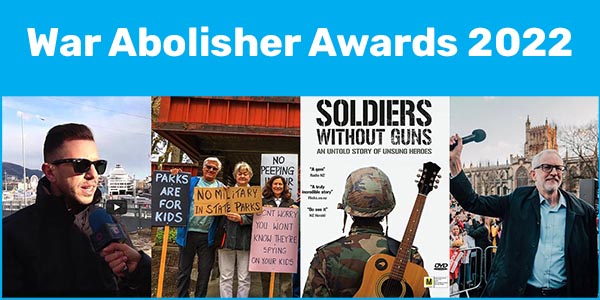 The Whidbey Environmental Action Network won an award from a global nonprofit for its successful lawsuit against the Navy in Thurston County in April.

World BEYOND War, an international organization dedicated to nonviolence and ending war worldwide, awarded four individuals and organizations from four different countries a War Abolisher Award in recognition of their efforts for peace. WEAN and the three other winners received their awards in a ceremony Sept. 5. This is World Beyond War’s second year giving the award.

In April of this year, WEAN won a court case in Thurston County Superior Court which found that Washington’s State Parks and Recreation Commission had been “arbitrary and capricious” in granting the United States Navy use of state parks for military training. A judge revoked permission to continue training in state parks.

“We were quite impressed with how hard and how strategically and how well they worked, and with the success that they’ve had,” he said, adding that it is important to highlight peace advocacy successes when they occur to provide a blueprint for others with similar aims.

Swanson said he also appreciated how WEAN’s lawsuit combined peace advocacy with environmental justice, saying that people don’t often realize how closely linked the two issues are. Militaries and wars, he said, are some of the top agents of environmental destruction.

WEAN founder Marianne Edain added that WEAN’s mission is to preserve and retain a functional ecosystem, and war and preparations for war are some of the most destructive forces ecosystems have to contend against.

“A peaceful world is an ecologically sustainable world,” she said.

The Navy’s actions in Washington state parks had a negative impact on both the environment and the residents and visitors trying to use the parks for recreation, Swanson said. Allowing parks to be used that way normalizes a culture of war, something World BEYOND War aims to eradicate.

“There’s too much acceptance of outrages under the banner of war preparations,” he said. “Anywhere that people push back against that, especially when they have a victory, should be lifted up and celebrated.”