US Independence Won By Nonviolent Resistance Before The War 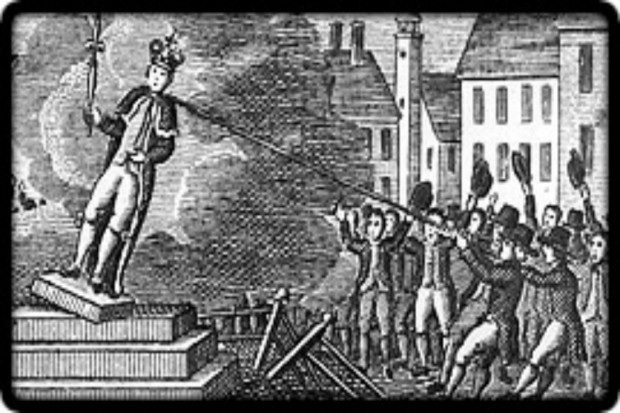 Above: Colonists Tear Down Statute of King George.

Note: There is much more to the story of the campaign for independence of the United States than the 56 people who signed the Declaration of Independence. There was a decade of resistance campaigns before 1776 that involved common people who have not shared historical recognition. In this period, women were key leaders but then war brought military men to the forefront. In fact, some say independence was won in that decade and the war was Great Britain’s effort to retake the colonies by force. Colonists used what today are considered classic tools of nonviolent resistance struggles. 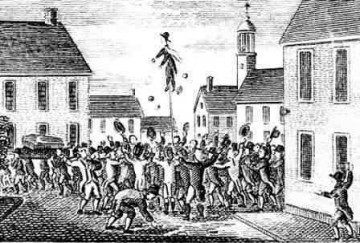 As described below there were multiple successful nonviolent struggle. It was the decade or more of a nonviolent resistance movement that created the consciousness for independence. It employed nonviolent means as petitions, protest marches, demonstrations, boycotts, and refusal to work. Further, if colonial merchants violated popular sentiments by continuing to import boycotted goods, people not only refused to buy from them but also to talk with them, to sit with them in church, or to sell them goods of any kind. Colonial businesses ignored British law and courts, “colonial activists conducted regular business in violation of British law by using documents without required tax stamps, by settling legal disputes without courts.” By 1774 and 1775, many of these colonial bodies assumed governmental powers on their own initiative and had powers greater than the remnants of colonial government. By the time the first Continental Congress was called in 1774 the colonists were creating their own parallel government. This is an area where we need more historical research but here is some of what we know:

In 1773-74 an increasing number of counties and towns were organizing themselves independently of British rule, adding a refusal to export American goods to Britain alongside the growing refusal to import British goods. Confidence grew that commercial coercion could be effective. Some official courts closed for lack of business because the colonists created their own alternatives; others became less active.

British power in the colonies was disintegrating rapidly. The governor of Massachusetts Bay reported in early 1774 that all official legislative and executive power was gone. By October 1774 the legal government in Maryland had virtually abdicated. In South Carolina the people were obeying the Continental Association instead of the British. Virginia Governor Dunmore wrote to London in December 1774 that it was counter-productive for him to issue orders because it only made more obvious people’s refusal to obey them.

During its meeting the First Continental Congress adopted a plan for further nonviolent struggle; scholar Gene Sharp believes that had the plan been followed instead of the armed struggle that became its substitute, the colonies might have become free sooner and with less bloodshed.

Following the battles of Lexington and Concord in 1775 the movement turned to armed struggle. The preceding 10 years of boycotts and many other methods considerably loosened the bonds that tied the colonies to the mother country. The nonviolent struggle encouraged an independent economy, alternative organizations for governance, and a sense of shared American identity.

Whatever future scholarship may reveal about the chance of the colonies achieving their independence nonviolently, many historians believe that the decade-long campaign allowed the Americans to build parallel institutions that ensured an orderly and democratic transition to independence following the American Revolutionary War.

Violence was opposed by many colonists. Samuel Adams wrote to James Warren, 21 May 1774 “Nothing can ruin us but our violence. Reason teaches this. I have indubitable Intelligence, dreadful, as to the Designs against us; consolotary, if we are but prudent.” There were only a handful of cases of tar and feathering, certainly a violent act, and colonists discouraged them seeing them as undermining the nonviolent resistance as people left the movement or would not join with such violence. In a letter to Dr. Jedediah Morse in 1815, John Adams reflected on the revolution writing “A history of military operations from April 19th, 1775 to the 3d of September, 1783, is not a history of the American Revolution . . . The revolution was in the minds and hearts of the people, and in the union of the colonies; both of which were substantially effected before hostilities commenced.”

For more on the nonviolent strategies used to revolt against the British, see The Real History of the United States Builds Our Power, and for information on the way issues we celebrate around Independence Day are issues that began long before July 4, 1776 and continued for many years after, up until today, The Untold History of Independence Day.

When it comes to slavery, independence was also very complicated and left deep wounds (still with us today, in many ways).  Professor Gerald Horne writes that independence was supported by many slave plantation owners and business people who profited from slavery because they saw slavery coming to an end in England. A British court ruled there was no legal basis for slavery, so slavery would have ended in British colonies as well.

In 1852, in what some call the greatest Fourth of July speech of all time, Frederick Douglas said “This Fourth of July is yours, not mine. You may rejoice, I must mourn.”He opened his speech describing the Fourth of July as “a thin veil to cover up crimes which would disgrace a nation of savages.” What war crimes, injustices, deep corruption and inequality is the United States hiding today?  KZ 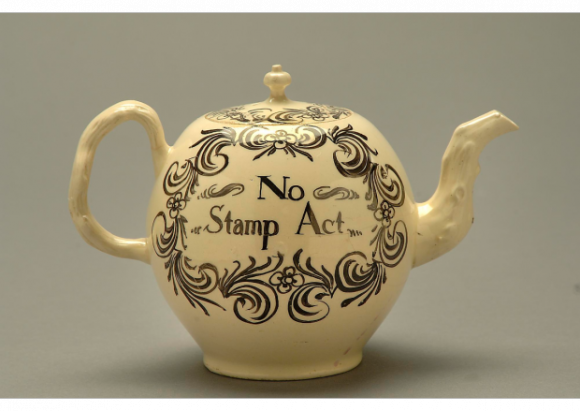 The Founding Myth Of The United States Of America

This weekend, cities and towns from coast-to-coast hosted fireworks, concerts, and parades to celebrate our independence from Britain. Those celebrations invariably highlight the soldiers who pushed the British from our shores. But the lesson we learn of a democracy forged in the crucible of revolutionary war tends to ignore how a decade of nonviolent resistance before the shot-heard-round-the-world shaped the founding of the United States, strengthened our sense of political identity, and laid the foundation of our democracy.

We’re taught that we won our independence from Britain through bloody battles. We recite poetry about the midnight ride of Paul Revere that warned of a British attack. And we’re shown depictions of Minutemen in battle with Redcoats in Lexington and Concord.

I grew up in Boston where our veneration for revolutionary battles against the British extends far beyond the Fourth of July. We celebrate Patriots’ Day to commemorate the anniversary of the first battles of the Revolution and Evacuation Day to commemorate the day British troops finally fled Boston. And at the start of every Red Sox game we stand, take off our hats, and sing – thirty-three thousand strong – about the perilous fight, the rockets’ red glare, and the bombs bursting in air that gave proof through the night that our flag was still there. 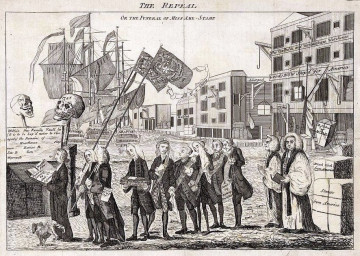 Colonists revolt against the Stamp Act.

Yet, Founding Father, John Adams wrote that, “A history of military operations…is not a history of the American Revolution.”

American Revolutionaries led not one, but three nonviolent resistance campaigns in the decade before the Revolutionary War. These campaigns were coordinated. They were primarily nonviolent. They helped politicize American society. And they allowed colonists to replace colonial political institutions with parallel institutions of self-government that help form the foundation of the democracy that we rely on today.

The first nonviolent resistance campaign was in 1765 against the Stamp Act. Tens of thousands of our forbearers refused to pay the British king a tax simply to print legal documents and newspapers, by collectively deciding to halt consumption of British goods. The ports of Boston, New York, and Philadelphia signed pacts against importing British products; women made homespun yarn to replace British cloth; and eligible bachelorettes in Rhode Island even refused to accept the addresses of any man who supported the Stamp Act.

Colonists organized the Stamp Act Congress. It passed statements of colonial rights and limits on British authority, and sent copies to every colony as well as one copy to Britain thereby demonstrating a united front. This mass political mobilization and economic boycott meant the Stamp Act would cost the British more money than it was worth to enforce leaving it dead on arrival. This victory also demonstrated the power of nonviolent non-cooperation: people-powered defiance of unjust social, political, or economic authority. 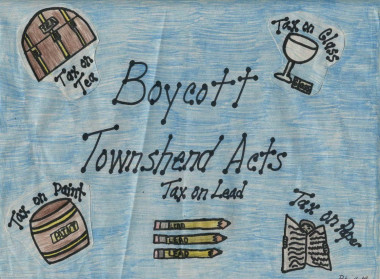 The second nonviolent resistance campaign started in 1767 against the Townshend Acts. These acts taxed paper, glass, tea, and other commodities imported from Britain. When the Townsend Acts went into effect, merchants in Boston, New York, and Philadelphia again stopped importing British goods. They declared that anyone continuing to trade with the British should be labeled “enemies of their country.” A sense of a new political identity detached from Britain grew across the colonies.

By 1770, colonists developed the Committees of Correspondence, a new political institution detached from British authority. The committees allowed colonists to share information and coordinate their opposition. The British Parliament reacted by doubling down and taxing tea, which led enraged members of the Sons of Liberty to carry out the infamous Boston Tea Party.

The British Parliament countered with the Coercive Acts, which effectively cloistered Massachusetts. The port of Boston was closed until the British East India Company was repaid for their Tea Party loses. Freedom of assembly was officially limited. And court trials were moved from Massachusetts.

In defiance of the British, colonists organized the First Continental Congress. Not only did they articulate their grievances against the British, colonists also created provincial congresses to enforce the rights they declared unto themselves. A newspaper at the time reported that these parallel legal institutions effectively took government out of the hands of British appointed authorities and placed it in the hands of the colonists so much so that some scholars assert that, “independence in many of the colonies had essentially been achieved prior to the commencement of military hostilities in Lexington and Concord.” 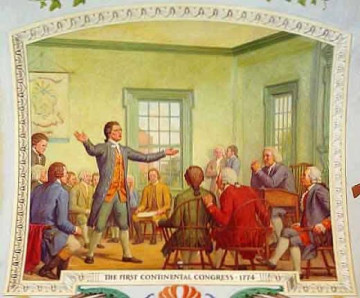 King George III felt that this level of political organization had gone too far, noting that; “…The New England Governments are in a State of Rebellion; blows must decide whether they are to be subject to this Country or independent.” In response, colonists organized the Second Continental Congress, appointed George Washington Commander in Chief and so began eight years of violent conflict.

The Revolutionary War may have physically kicked the British off our shores, but this past weekend’s focus on war obscures the contributions that nonviolent resistance made to the founding of our country.

During the decade leading up to the war, colonists articulated and debated political decisions in public assemblies. In so doing, they politicized society and strengthened their sense of a new political identity free from the British. They legislated policy, enforced rights, and even collected taxes. In so doing, they practiced self-governance outside of wartime. And they experienced the power of nonviolent political action across the broad stretches of land that were to become the United States of America.

So on future Independence Days, let us celebrate our forefathers’ and mothers’ nonviolent resistance to British colonial rule. And every day as we deliberate the myriad challenges facing our democracy, let us draw on our nonviolent history just as John Adams, Benjamin Franklin, John Hancock, Patrick Henry, Thomas Jefferson, and George Washington did over two centuries ago.

Benjamin Naimark-Rowse is a Truman National Security Fellow. He teaches and studies nonviolent resistance at The Fletcher School at Tufts University.