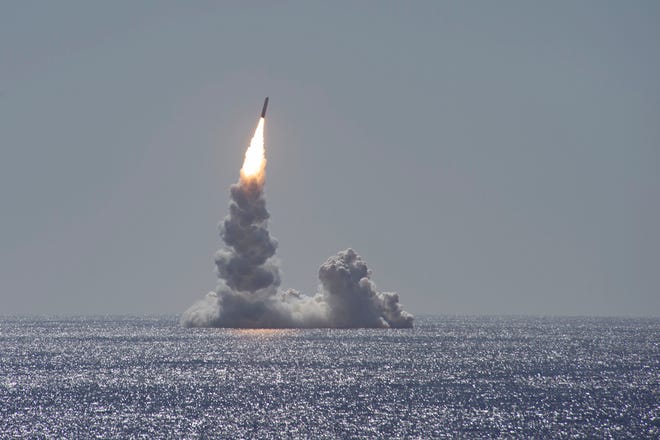 An unarmed Trident II (D5LE) missile launches from the Ohio-class ballistic missile submarine USS Maine (SSBN 741) off the coast of San Diego, California, Feb. 12, 2020. The United States and Russia signaled last week a willingness to extend the only remaining strategic arms agreement between the two countries, which caps deployed missiles like these to 1,550 for each side. MC2 Thomas Gooley, U.S. Navy

An 11th-hour agreement to keep alive the last remaining treaty limiting strategic nuclear weapons between the United States and Russia appears to be taking shape.

“I can confirm that the United States intends to seek a five-year extension of New START, as the treaty permits,” President Joe Biden’s spokeswoman Jen Psaki said Thursday of the New Strategic Arms Reduction Treaty. “The president has long been clear that the New START Treaty is in the national security interests of the United States. And this extension makes even more sense when the relationship with Russia is adversarial, as it is at this time.”

On Friday, the Russians signaled they would also be open to an extension of an agreement that has kept both countries at a maximum of 1,550 deployed nuclear warheads and 700 deployed missiles and bombers for the last 10 years.

“We can only welcome political will to extend the document,” Dmitry Peskov, spokesman for Russian President Vladimir Putin, said in a conference call with reporters and reported by the Associated Press. “But all will depend on the details of the proposal.”

Still, the clock is ticking. Biden’s call is for a five year extension — and an agreement must be struck by Feb. 5, less than two weeks from now.

New START, which dates to an agreement President Barack Obama signed with Dmitry Medvedev in 2010, has impacts in Kitsap County. The majority of the nation’s fleet of ballistic-missile submarines — which carry those nuclear weapons — are based at Naval Base Kitsap-Bangor on Hood Canal. New START actually limits those subs to 20 missiles each, though they can load up to 24.

Signals of an extension seemed to come as welcome news at the Pentagon as well. Spokesman John Kirby said Thursday that prolonging limits on strategic nuclear weapons stockpiles “advances the nation’s defense” and keeps Americans “much safer.”

He added that it also gives time to the two countries to add other arms control agreements.

“And the Department stands ready to support our colleagues in the State Department as they effect this extension and explore those new arrangements,” he said.

But he cautioned that the Pentagon would also “remain clear-eyed about the challenges Russia poses and committed to defending the nation against their reckless and adversarial actions.”

The possible extension comes at a time when a new United Nations treaty, which went into effect Friday, declares possession of nuclear weapons illegal. To commemorate the new treaty, the Poulsbo-based Ground Zero Center for Nonviolent Action and World Beyond War, another anti-nuclear weapon group, have erected billboards around Puget Sound that declare: “Nuclear weapons are now illegal. Get them out of Puget Sound!”

Josh Farley is a reporter covering the military for the Kitsap Sun. He can be reached at 360-792-9227, josh.farley@kitsapsun.com or on Twitter at @joshfarley.

Please consider supporting local journalism in Kitsap County with a digital subscription to the Sun.