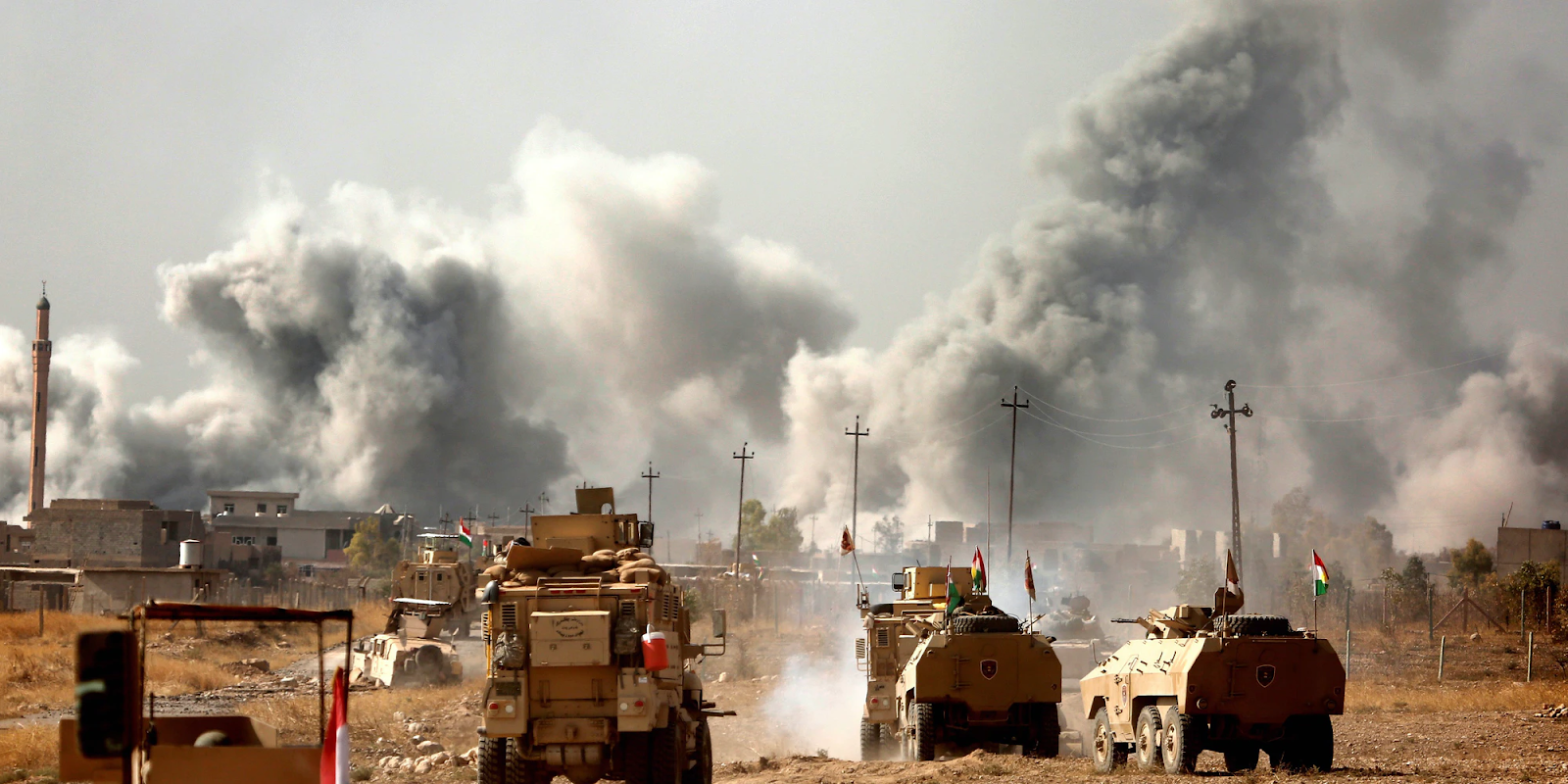 On February 25th, President Biden ordered U.S. air forces to drop seven 500-pound bombs on Iraqi forces in Syria, reportedly killing 22 people. The U.S. airstrike has predictably failed to halt rocket attacks on deeply unpopular U.S. bases in Iraq, which the Iraqi National Assembly passed a resolution to close over a year ago.

The Western media reported the U.S. airstrike as an isolated and exceptional incident, and there has been significant blowback from the U.S. public, Congress and the world community, condemning the strikes as illegal and a dangerous escalation of yet another Middle East conflict.

So, if those seven 500-pound bombs were the only bombs the U.S. and its allies dropped on February 25th, it would have been an unusually quiet day for U.S. and allied air forces, and for their enemies and victims on the ground, compared to an average day in 2019 or most of the past 20 years. On the other hand, if the unrelenting U.S. air assault on countries across the Greater Middle East finally began to diminish over the past year, this bombing may have been an unusual spike in violence. But which of these was it, and how would we know?

We don’t know, because our government doesn’t want us to. From January 2004 until February 2020, the U.S. military kept track of how many bombs and missiles it dropped on Afghanistan, Iraq and Syria, and published those figures in regular, monthly Airpower Summaries, which were readily available to journalists and the public. But in March 2020, the Trump administration abruptly stopped publishing U.S. Airpower Summaries, and the Biden administration has so far not published any either.

As with the human casualties and mass destruction that these hundreds of thousands of airstrikes cause, the U.S. and international media only report on a tiny fraction of them. Without regular U.S. Airpower Summaries, comprehensive databases of airstrikes in other war-zones and serious mortality studies in the countries involved, the American public and the world are left almost completely in the dark about the death and destruction our country’s leaders keep wreaking in our name. The disappearance of Airpower Summaries has made it impossible to get a clear picture of the current scale of U.S. airstrikes.

Here are up-to-date figures on U.S. and allied airstrikes, from 2001 to the present, highlighting the secrecy in which they have abruptly been shrouded for the past year: 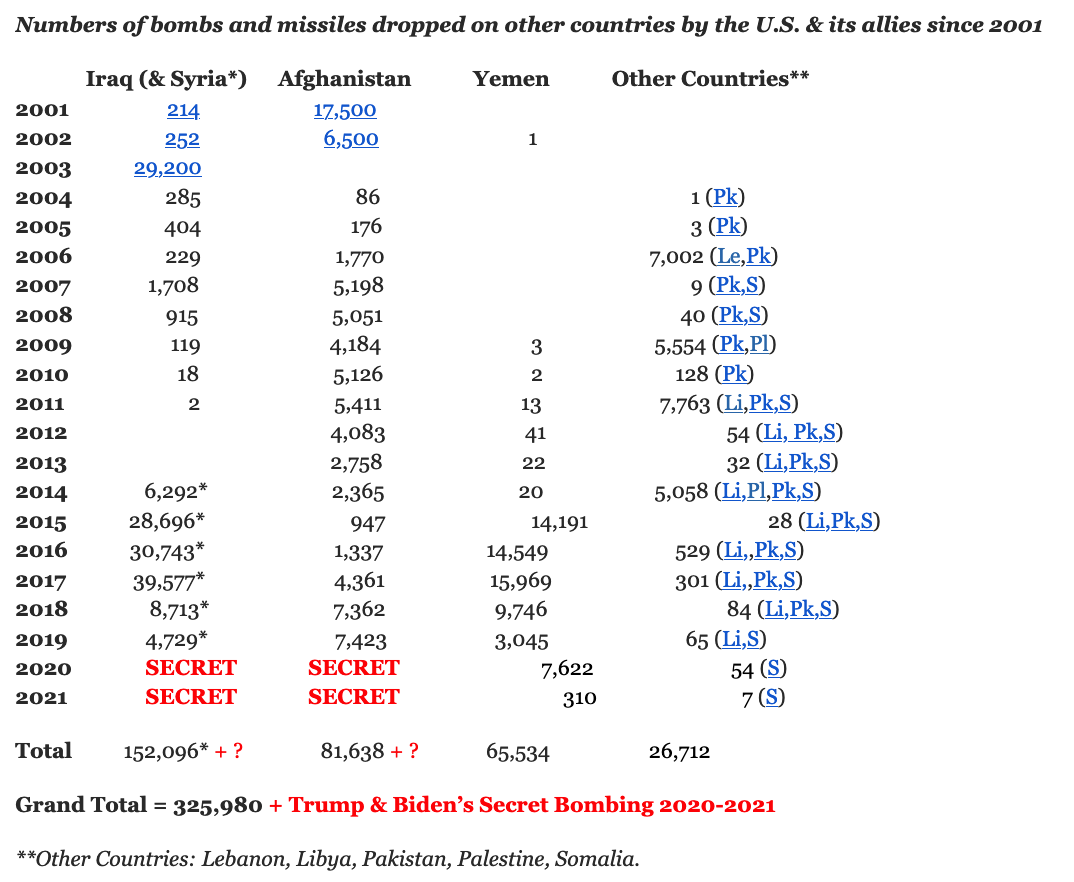 These figures are based on U.S. Airpower Summaries for Afghanistan, Iraq, and Syria; the Bureau of Investigative Journalism’s count of drone strikes in Pakistan, Somalia and Yemen; the Yemen Data Project‘s count of Saudi-led airstrikes in Yemen; the New America Foundation’s database of foreign airstrikes in Libya; and other published statistics. Figures for 2021 are only through January.

There are several categories of airstrikes that are not included in this table, meaning that the true numbers of airstrikes are certainly higher. These include:

– Helicopter strikes: Military Times published an article in February 2017 titled, “The U.S. military’s stats on deadly airstrikes are wrong. Thousands have gone unreported.” The largest pool of airstrikes not included in U.S. Airpower Summaries are strikes by attack helicopters. The U.S. Army told the authors its helicopters had conducted 456 otherwise unreported airstrikes in Afghanistan in 2016. The authors explained that the non-reporting of helicopter strikes has been consistent throughout the post-9/11 wars, and they still did not know how many actual missiles were fired in those 456 attacks in Afghanistan in the one year they investigated.

– AC-130 gunships: The airstrike that destroyed the Doctors Without Borders hospital in Kunduz, Afghanistan in 2015 was not conducted with bombs or missiles, but by a Lockheed-Boeing AC-130 gunship. These machines of mass destruction, usually manned by U.S. Air Force special operations forces, are designed to circle a target on the ground, pouring howitzer shells and cannon fire into it, often until it is completely destroyed. The U.S. has used AC-130s in Afghanistan, Iraq, Libya, Somalia, and Syria.

– Strafing runs: U.S. Airpower Summaries for 2004-2007 included a note that their tally of “strikes with munitions dropped… does not include 20mm and 30mm cannon or rockets.” But the 30mm cannons on A-10 Warthogs and other ground attack planes are powerful weapons, originally designed to destroy Soviet tanks. A-10s fire 65 depleted uranium shells per second to blanket an area with deadly and indiscriminate fire, but that does not count as a “weapons release” in U.S. Airpower Summaries.

– “Counter-insurgency” and “counter-terrorism” operations in other parts of the world. The United States formed a military coalition with 11 West African countries in 2005, and now has a drone base in Niger, but we have not found a database of U.S. and allied air strikes in that region, or in the Philippines, Latin America or elsewhere.

It was clearly no coincidence that Trump stopped publishing Airpower Summaries right after the February 2020 U.S. withdrawal agreement with the Taliban, reinforcing the false impression that the war in Afghanistan was over. In fact, U.S. bombing resumed after only an 11-day pause.

As our table shows, 2018 and 2019 were back-to-back record years for U.S. airstrikes in Afghanistan. But how about 2020? Without the official records, we don’t know whether the withdrawal agreement led to a serious reduction in airstrikes or not.

President Biden has foolishly tried to use airstrikes in Syria as “leverage” with Iran, instead of simply rejoining the Iran nuclear agreement as he promised during the election campaign. Biden is likewise trailing along in Trump’s footsteps by shrouding U.S. airstrikes in the secrecy that Trump used to obscure his failure to “end the endless wars.”
It is entirely possible that the highly publicized February 25th airstrikes, like Trump’s April 2017 missile strikes on Syria, were a diversion from much heavier, but largely unreported, U.S. bombing already under way elsewhere, in that case the frightful destruction of Mosul, Iraq’s former second city.
The only way that Biden can reassure the American public that he is not using Trump’s wall of secrecy to continue America’s devastating airwars, notably in Afghanistan, is to end this secrecy now, and resume the publication of complete and accurate U.S. Airpower Summaries.
President Biden cannot restore the world’s respect for American leadership, or the American public’s support for our foreign policy, by piling more lies, secrets and atrocities on top of those he has inherited. If he keeps trying to do so, he might well find himself following in Trump’s footsteps in yet another way: as the failed, one-term president of a destructive and declining empire.
Medea Benjamin is cofounder of CODEPINK for Peace, and author of several books, including Inside Iran: The Real History and Politics of the Islamic Republic of Iran.

Nicolas J. S. Davies is a freelance writer and a researcher with CODEPINK, and the author of Blood On Our Hands: the American Invasion and Destruction of Iraq.