The Ongoing And Unjustifiable Persecution Of Julian Assange 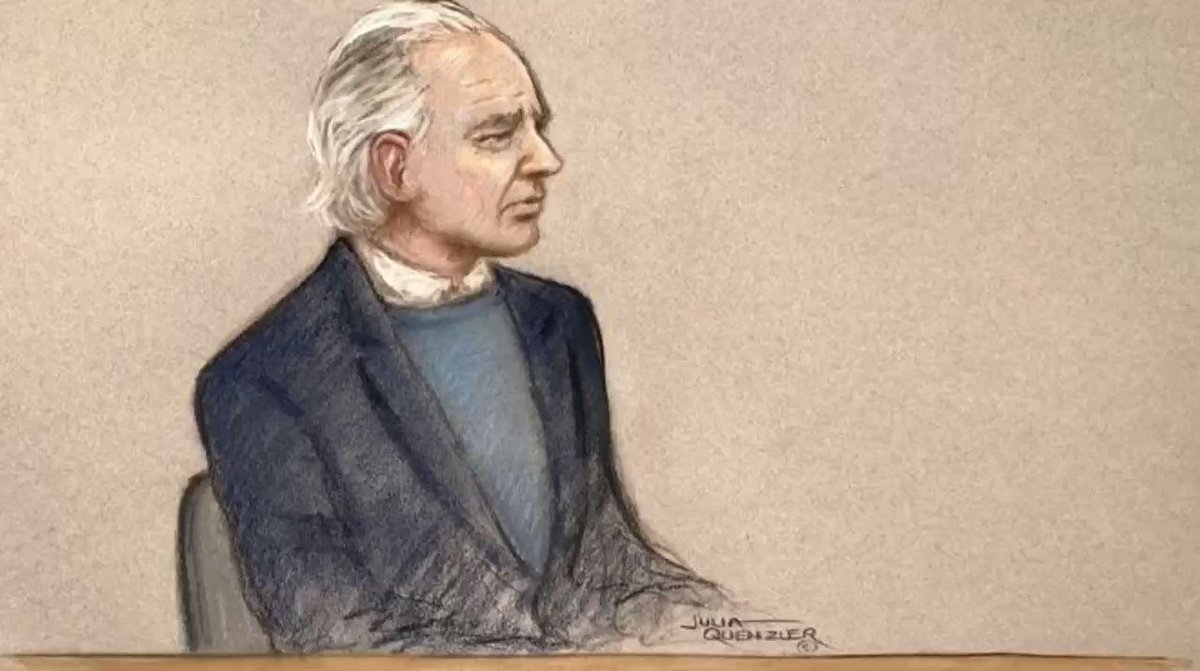 A hugely important struggle for press freedom is currently taking place in the Old Bailey in London, where, on Monday, three weeks of hearings began regarding the proposed extradition to the US of Julian Assange, the founder of WikiLeaks. In 2010 and 2011, WikiLeaks published documents leaked by a serving member of the US military — Bradley, now Chelsea Manning — that exposed evidence of war crimes committed by the US and, in the case of my particular area of expertise, Guantánamo.

The Guantánamo revelations were contained in classified military files relating to almost all of the 779 men held at the prison by the uS military since it opened in January 2002, which, for the first time, explicitly revealed how profoundly unreliable the supposed evidence against the prisoners was, much of it having been made by prisoners who had made numerous false statements against their fellow prisoners. I worked with WikiLeaks as a media partner for the release of the Guantánamo files, and my summary of the files’ significance can be found in the article I wrote when they were first published entitled, WikiLeaks Reveals Secret Guantánamo Files, Exposes Detention Policy as a Construct of Lies.

I should add that I am one of the witnesses for the defence, and will be appearing in court sometime over the next few weeks to discuss the significance of the Guantánamo files. See this post by Kevin Gosztola of Shadowproof listing those taking part, who include Professor Noam Chomsky, Jameel Jaffer, the executive director of the Knight First Amendment Institute at Columbia University, journalists John Goetz, Jakob Augstein, Emily Dische-Becker and Sami Ben Garbia, lawyers Eric Lewis and Barry Pollack, and Dr. Sondra Crosby, a medical doctor who examined Assange while he was in the Ecuadorian Embassy, where he lived for almost seven years after claiming asylum in 2012.

The defence case (see here and here) and the prosecution case (see here) have been made available by Bridges for Media Freedom, which “works to educate the public and key stakeholders about threats to media freedom across the entire sphere of modern digital reporting,” and the organization is also making available witness statements as and when the witnesses appear — to date, US professor of broadcast journalism Mark Feldstein (see here and here), lawyer Clive Stafford Smith, the founder of Reprieve (see here), Paul Rogers, professor of peace studies at Bradford University (see here), and Trevor Timm of the Freedom of the Press Foundation (see here).

Despite all this — and the weeks of expert testimony to come — the blunt truth is that these hearings shouldn’t be taking place at all. In making publicly available the documents leaked by Manning, WikiLeaks was acting as a publisher, and, while governments obviously don’t like evidence being published regarding their secrets and crimes, one of the defining differences between an allegedly free society and a dictatorship is that, in a free society, those who publish leaked documents critical of their governments are not punished by legal means for doing so. In the US, the First Amendment to the US Constitution, which guarantees free speech, is meant to prevent what is currently happening in the case of Julian Assange.

In addition, in publishing the documents leaked by Manning, Assange and WikiLeaks were not working alone; instead, they worked closely with a number of prestigious newspapers, so that, if a case were to be made that Assange and WikiLeaks were engaged in criminal activity, then so too were the publishers and editors of the New York Times, the Washington Post, the Guardian and all the other newspapers around the world who worked with Assange on the release of these documents, as I explained when Assange was first arrested and charged last year, in articles entitled, Defend Julian Assange and WikiLeaks: Press Freedom Depends On It and Stop the Extradition: If Julian Assange Is Guilty of Espionage, So Too Are the New York Times, the Guardian and Numerous Other Media Outlets, and, in February this year, in an article entitled, A Call for the Mainstream Media to Defend Press Freedom and to Oppose the Proposed Extradition of Julian Assange to the US.

The US’s alleged basis for prosecuting Assange is the Espionage Act of 1917, which has been widely criticised. A report in 2015 by the PEN American Center found, as Wikipedia explained, that “almost all of the non-government representatives they interviewed, including activists, lawyers, journalists and whistleblowers, ‘thought the Espionage Act had been used inappropriately in leak cases that have a public interest component.’” As PEN explained, “experts described it as ‘too blunt an instrument,’ ‘aggressive, broad and suppressive,’ a ‘tool of intimidation,’ ‘chilling of free speech,’ and a ‘poor vehicle for prosecuting leakers and whistleblowers.’”

President Obama had considered seeking Julian Assange’s extradition, but had correctly concluded that doing so would constitute an unprecedented and unacceptable assault on press freedom. As Charlie Savage explained in a New York Times article when Assange was charged, the Obama administration had “weighed charging Mr. Assange, but rejected that step out of fears that it would chill investigative journalism and could be struck down as unconstitutional.”

Donald Trump and his administration, however, had no such qualms, and when they decided to proceed with an extradition request for Assange, the British government allowed its disdain for the WikiLeaks founder to override what should have been its own defense of the media’s freedom to publish material that is in the common interest, but that governments may not want published, as part of the necessary functioning of a society that recognises the need for checks and balances on absolute power, in which the media can, and should play a major part.

Despite the very obvious assault on press freedom that the Assange case represents, the US government — and, presumably, its supporters in the British government — are pretending that what the case is actually about is criminal activity on Assange’s part in securing the information that was later published, and a disregard for the safety of people in the files whose names were revealed.

The first of these charges, unsealed on the day Assange was arrested (April 11 last year), alleged that he had tried to help Manning to hack into a government computer to avoid detection, a charge carrying a maximum five-year sentence, which had actually been included in Manning’s trial.

However, the 17 espionage charges covered new territory, “focused,” as Charlie Savage described it, “on a handful of files that contained the names of people who had provided information to the United States in dangerous places like the Afghanistan and Iraq war zones, and authoritarian states like China, Iran and Syria.”

As Savage added, “The evidence laid out in the indictment against Mr. Assange mapped onto information presented by military prosecutors in the 2013 court-martial trial of Ms. Manning. Prosecutors in her case also alleged that her actions endangered the people whose names were revealed in the documents when Mr. Assange published them, though they presented no evidence that anyone was killed as a result.”

That last point ought, surely, to be crucial, but Savage noted that a Justice Department official “declined to say whether any such evidence now exists, but stressed that prosecutors would need to prove in court only what they say in the indictment: that publication put people in danger.”

If extradited and successfully prosecuted, Assange faces a 175-year sentence, which strikes me as outrageously excessive for having “put people in danger,” but then everything about this case is excessive, not least in the way that the US government feels entitled to change the rules whenever it wants to.

In June, for example, the US dropped the existing indictment and submitted a new one, with additional claims that Assange had tried to recruit other hackers — as though submitting a superceding indictment like this was perfectly normal behavior, when it is anything but.

As the extradition hearing began on Monday, Mark Summers QC, one of Assange’s lawyers, called the delivery of the superseding indictment “abnormal, unfair and liable to create real injustice.” As the Guardian explained, Summers said that the additional material “had appeared out of the blue,” and ”presented extra allegations of criminality which it claimed on their own might be separate grounds for extradition, such as stealing data from banks, obtaining information on tracking police vehicles, and supposedly ‘assisting a whistleblower [Edward Snowden] in Hong Kong.’”

As Summers proceeded to explain, “This is essentially a fresh extradition request,” which was, he said, “presented at short notice at a time when Assange has been ‘inhibited’ from speaking to his defence lawyers.” He also said that Assange and his lawyers believed that the additional material was introduced and an act of desperation, because “the US saw the strength of the defence case and thought they would lose.” He asked Judge Vanessa Baraitser “to ‘excise’ or dismiss the belated extra US indictments,” and also sought to delay the extradition hearing, but Judge Baraitser refused.

It remains to be seen if, as the case progresses, those defending Assange can manage to persuade the judge to deny the US’s extradition request. It seems unlikely, but a key aspect of the extradition treaty is that it is not supposed to be for political offences, even though that is what the US government actually seems to be claiming, particularly through its use of the Espionage Act. As another of Assange’s lawyers, Edward Fitzgerald QC, explained, in the defence argument, which he wrote, the prosecution of Assange is “being pursued for ulterior political motives and not in good faith”.

As he further explained “The [US] request seeks extradition for what is a classic ‘political offence.’ Extradition for a political offence is expressly prohibited by article 4(1) of the Anglo-US extradition treaty. Therefore, it constitutes an abuse of this court’s process to require this court to extradite on the basis of the Anglo-US treaty in breach of the treaty’s express provisions.”

Andy Worthington is a freelance investigative journalist, activist, author, photographer, film-maker and singer-songwriter (the lead singer and main songwriter for the London-based band The Four Fathers, whose music is available via Bandcamp).