Stop Rearmament in the Nordic Countries 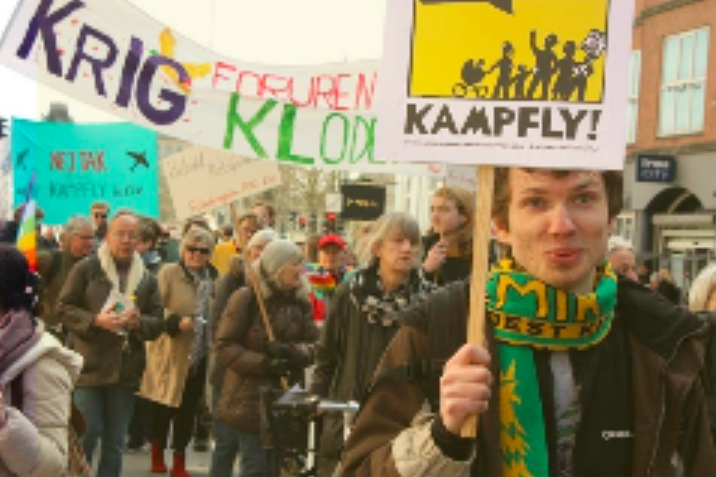 Peace is achieved by peaceful means

All Nordic countries are being rearmed under the leadership of NATO. The danger of war increases accordingly. At the defence ministers meeting in NATO in November 2017 decisions were made which seriously threaten peace.

An Atlantic centre is to be created for NATO to gain control over The Atlantic and The Arctic. In Norway basesfor the US Marine are being established. Rygge Airport near Moss is being expanded in order to act as a USAir-force base in a case of conflict. In Iceland Keflavik became a US military base in 2016.

A logistic centre will ensure that NATO can move its forces freely all over Europe. Infrastructure will beregarded as a military concern in preparation for war.

In cooperation with the EU transport, energy and communication systems together with legislation are being adapted to a situation of war. The presence of American soldiers at Arlanda Airport gives a clear indication of this development.

Cooperation with NATO has lead to major changes in defence policies

Norway, Denmark, and Iceland have been members of NATO since 1949, while Sweden and Finland joined “Partnership for Peace” in 1994. Moreover, Finland has a host country agreement with NATO since 2014. In May 2016 the Swedish parliament ratified its host country agreement with NATO, in spite of wide public resistance. The expansion of NATO activities in recent years has taken place at an increased pace to the North and to the East, coming close to the Russian border. This development increases tension and the danger of war with Russia

Nordic military collaboration plays an increasingly important role, involving Nordefco (Nordic Defence Cooperation), the Nordic-Baltic cooperation in NB8 (eight Nordic and Baltic countries) and the military cooperation in the Northern Group (the Nordic countries, the UK, Germany, Poland and the Netherlands). Sweden and Finland are thus drawn closer to NATO.

The Nordic countries can no longer be considered peace-loving nations. Rearmament and collaboration with NATO increases the danger of war.

The first steps to establish permanent military bases in Norway have been taken. 300 US marines have been stationed in Værnes near Trondheim, the next step being a base in Setermoen in Troms. A large amount of military equipment is stored for the Americans, located in mountain caves in Trøndelag and at the five airports Andøya, Sola, Bodø, Evenes and Bardufoss.

Training areas for British soldiers have furthermore been organised. The US base at Keflavik in Iceland is being modernised, and there are plans for placing a central training- and command centre for all the Northern European F-35 fighter jets in Jutland.

The first F-35 fighters have arrived in Norway and are based in Ørland, Trøndelag. In a few years time F-35 fighters will also be based in Denmark at the military airport of Skrydstrup near the German border. Also Finland considers buying F-35 fighter jets.

With these fighters the Northern countries are in possession of an offensive weapon, capable of carrying nuclear bombs and cruise missiles. Their extended range gives them the capability to reach goals far inside Russia. The F-35 jets form part of NATO’s fleet of warplanes under US command. The cost amounts to billions of crowns, money taken from welfare budgets.

Nuclear weapons are being modernised costing enormous amounts of money. This is happening in USA, Russiaand the UK. In January 2017 President Trump gave his defence minister Mattis directives for the NuclearPosture Review, NPR. This must be considered as the world’s most dangerous document, bringing closer thepossibility of nuclear war by lowering the threshold for the use of nuclear arms. Now there is talk of the actualuse of nuclear weapons – in the USA as well as in Russia.

The Nordic countries are becoming an important part of NATO’s missile defence through the new Globus 3 radar station in Vardø, Finnmark. It will be installed by 2020 and will give the Nordic countries a leading role. The Nordic agreements made in November 2017 entail that information from Finland and Sweden will be available to NATO.

The militarisation of The Baltic Sea and the Baltic countries

The Baltic Sea is being militarized in different ways. Since 2009 USA/NATO, Sweden, and Finland have participated in annual military exercises in the Baltic countries and in The Baltic Sea. Sweden has set up a military base on Gotland and the historic neutrality of Åland is under pressure.

Denmark will establish a new interception centre on Bornholm. In Norway Hønefoss is a major centre for tapping the communication from phones and social media.

The Danish defence agreement 2018 – 2023 contains rearmament orientated towards The Baltic Sea, the Baltic countries and Russia. The military budget is to be increased by 20 % or 12,3 billions Danish crowns over the next 6 years. The purchase of the F-35 fighter jets is a part of this budget. The Danish warships will be equipped with missiles and radar and in the long run possibly also with nuclear missiles. Drones will be a part of the defence.

A fully equipped force of 4 000 soldiers ready for use in the Baltic countries is under way. Denmark has been designated the place where NATO troops will gather in case of war with Russia. A force of 20 000 soldiers will be mobilised to safeguard logistics.

Denmark also has launched a satellite to monitor (the) traffic at sea and in the air in The Arctic. From 2018 Danish troops will be permanently stationed in Estonia.

Sweden and Finland have as already mentioned established host country agreements with the US. This means that NATO – on the basis of an invitation from the host nation – can not only exercise, but also threaten or conduct a war against a third country from the territory of the host nation.

Finland has invited the US to participate in a military exercise in 2020, the biggest ever in Finland. Sweden and Finland have every year since 2013 taken part in the NATO Arctic Challenge Exercise.

The Swedish host country agreement is being used for military exercises with NATO countries. The biggest exercise until now, Aurora 17 had participants from Sweden, the US, Finland, Norway, France, Denmark, Estonia and Lithuania. In 2014 Sweden and Finland together with Georgia, Jordan and Australia were designated specially valuable partners in the Enhanced Opportunities Program (EOP). This gives these countries the right to sit at the table at the NATO summit meetings.

Finland and NATO have initiated extensive cooperation in the area of security. In October 2017 Jens Stoltenbergopened an expert centre in Finland against cyber threats (www.hybridcoe.fi ).

Sweden collaborates with StratCom in Riga (Nato Strategic Communications Centre of Excellence). It is obvious who is regarded as the enemy. This is a far call indeed from making use of what we know about good conflict management.

In December 11th 2017 The Council of the European Union decided to establish permanently structured cooperation in the area of defence (PESCO). The purpose is to develop a common defence capacity and to invest in common projects. The countries commit themselves to rearmament. PESCO contributes to the militarisation of the EU. The participating member countries are 25 in number, including Sweden and Finland. Denmark has an exception from military cooperation within the EU and will therefore not take part in PESCO. Norway is of course not a member of the EU, but a member of NATO.

According to the PESCO agreement each member country will bring its own proposals as to how to collaborate. Sweden will contribute with a European test- and evaluation centre in Vidsel. This will without a doubt lead to more countries testing weapons and carrying out military exercises in Norrbotten.

The Vidsel test area (North European Aerospace Test Range, NEAT) is situated in Norrbotten. It is the largest test area in Europe for new weapon systems, drones, fighter jets and satellite-aided rockets. Here Israel and the US have developed their satellite-aided weapons used during the Israeli attack on Gaza. A wide range of military exercises have in recent years taken place in the north.

The worlds largest downloading station from satellites, Esrange, is situated near Kiruna. On a commercial basis it supplies photos of areas important to the military of the western allies. Kiruna has become one of the two Galileo stations made for satellites and to tap relay commands from ground stations.

Lerkil in Sweden has the world third largest interception station, the US and the UK leading the way.

Today foreign and security policy is conceived of in terms of power. This leads to each country using threats,deterrence and different types of violence to achieve its short-term national goals.  In the long run this can leadto total destruction through nuclear war. Knowledge as to how to deal more constructively with conflict exists,but is not being used. This knowledge is the underlying principles behind the UN Charter and diplomaticmediation.

Conflicts must be analysed from the perspective of all parties involved, threats be avoided, and conflicts seen asproblems we have in common which are to be solved in a respectful way. It is important not to build upantagonism. Enemy images must be avoided. Militarisation rests on people’s fears. Military rearmament leads tofurther military build up which in turn triggers more fear and more arms in a never-ending spiral upwards. Thisleads to enormous costs. We advocate dialogue at all levels, economic and cultural exchange and diplomacy as atool in order to meet the needs of all peoples and nations – ‘mutual security for people’.

Make use of what is known about how to handle conflicts constructively! Honour the UN Charter, which hasbeen signed by all of the above mentioned states. The charter prescribes the solving of conflicts by peacefulmeans. War is forbidden, apart from self-defence. Resources are needed for human welfare, not for war anddestruction. Wars lead to refugees, to suffering and new conflicts.

In 2018 Norway will be the host country of a big military exercise under the auspices of NATO Trident Juncture 18. 35 000 soldiers from 30 countries, 150 fighter jets and 70 marine vessels will participate. The exercise will take place not only in Norway but also and Sweden, Finland, Iceland and the Baltic.

The scenario is that one of the Nordic countries is attacked by Russia. We must stand together against NATO’spreparations for war. Together we must protest against military exercises and rearmament. Rearmament isfinanced by welfare budgets and threatens us all with the danger of a mad nuclear war.

We also support the call to protest in all European capitals during the NATO summit in July 11th this year.